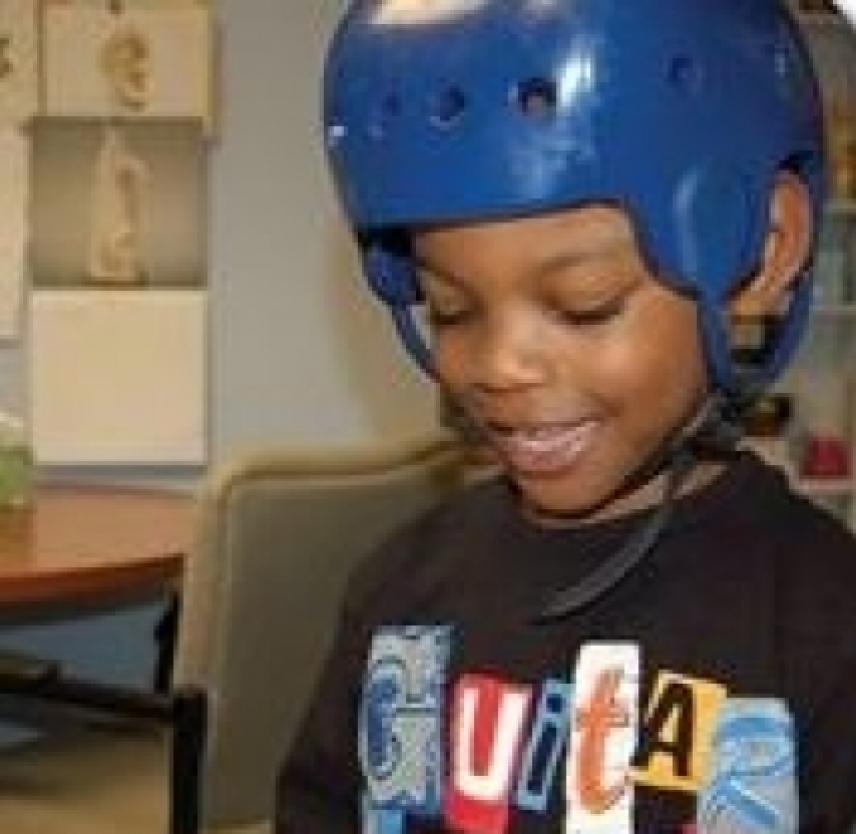 Kendell Jaylin Isons is a 6-year-old social butterfly, bopping around Children’s Specialized Hospital in Mountainside, New Jersey. When Kendell isn’t at the hospital, his favorite activities are playing video games or practicing karate. Kendell is a white belt, and he has high hopes of becoming a black belt — or even a purple belt — one day.

“I want to practice to get stronger so I can take out that guy,” he says with a laugh.

This is a good day. Kendell’s outside, done with his therapy, and is collecting leaves for an arts and crafts project. His mom, Stephanie Isons, a single mom and Army National Guardswoman, is cautioning him not to get dirt on his clothes. Kendell makes friends with everyone who passes by, though most employees know him already.

It’s hard to imagine that such a short time ago, Kendell was in a coma.

Stephanie had just returned home to East Orange. She was only on military leave for two days and was preparing to leave again to deal with impending Hurricane Irene. It was September 26, 2011.

Kendell was always ready to help mom with a project, so the two began to sort through old clothes from dresser drawers, to get him ready before she would be off to serve her country.

Before Stephanie knew what was happening, a heavy dresser (and the TV atop it) became imbalanced and fell onto Kendell’s head. Kendell suffered a traumatic brain injury and immediately became unconscious. Waiting for the ambulance, Stephanie describes that time as the “longest five minutes of my life.” Kendell was rushed to the University of Medicine and Dentistry of New Jersey in Newark where he remained in a coma for four weeks.

Kendell suffered multiple skull fractures, which resulted in profuse bleeding and swelling on his brain. When he miraculously came out of his coma, Stephanie remembers being terrified; Kendell couldn’t look at or speak to her.

“It was like having a newborn baby,” Isons said. “He lost all motor skills in his right side and he couldn’t do anything.”

After a recommendation by his doctors at UMDNJ, Kendell was transferred to PSE&G Children’s Specialized Hospital, where he could get the rehabilitative treatment he needed. Staff there determined that he had short term memory loss. He also suffered from sensory impairments, a learning disability, little impulse control, and self-injurious behaviors due to his traumatic brain injury.

After a month of inpatient rehabilitation, Kendell returned home and began receiving outpatient treatment. With the guidance of therapists, in just six months, Kendell learned to walk and talk again. He even relearned the alphabet. Through personalized play therapy, doctors were able to address Kendell’s functional skill deficits and at the same time, foster his areas of strength. Neuropsychologists helped Kendell cope with his anger from not being able to do what he could do before as an independent child. Frustration was high.

“He remembers where he was, it’s hard for him,” Stephanie said.

Kendell and his “team” — as Stephanie refers to it — are also working on building his confidence, and trying all kinds of different techniques. Kendell has to find a new way to process new information.

“It has to be consistent. Teamwork is important, everyone has to be on the same page,” Stephanie said.

Michele Demarest, Kendell’s speech language pathologist, said when Kendell feels frustrated he is encouraged to "use his strategies.”

“He practices deep, slow breathing — we prompt him to ‘smell the pizza and blow out the candles.’ Using this strategy helps him be in control of his emotions, especially when he begins to feel overwhelmed,” Michele said.

Kendell uses a picture schedule to help him plan his day and recall what he will do first, next and last. He is able to choose from a limited number of icons to help him determine which activities he will work on in any given therapy session.  Using this strategy helps him stay organized, manage his expectations and avoid temper tantrums.

Although her son occasionally has a bad day, Stephanie praised the team for not rushing to simply medicate her son — putting a band-aide on his wound.

Kendell realizes that there are things that are hard for him now that used to be easy.

Although he would rather do things on his own most of the time, he is beginning to open up.  Kendell is praised when he is brave enough to ask for help and accept it.

Stephanie says it’s important to remember that in December 2011, Kendell was in a wheelchair.

“I’m grateful for what he’s accomplished, and the care he’s received. I’m waiting to see what the future will bring.”