Giving Support to Parents and Siblings of a Child with TBI

Hospital Executive Amy Mansue talks about the importance of giving parents and siblings the words and supports they need to help them deal with their loved one's TBI — in the short- and long-term.

[Amy Mansue] Each part of the medical profession has its role, so the trauma center has to save that child's life. That is job number one. There is nothing more important than that. At the rehab side, we are in it for the long haul, and we have to be there with all of our clinical skills, but also with our heart to make sure that that family understands that this process is not going to be a 30 day length of stay out of rehab hospital— that it's going to go on maybe for that child's entire life. Through that process, we have to make sure that we've given them the supports—them being the family and the siblings— the words in some cases, but the supports to be able to help that child achieve all that they can achieve. Siblings have a really important role in this. Our thought as a parent is we need to protect them, right? Sometimes we don't want to talk about what's happened, and we don't want them to have to relive it, and we don't want them to feel cheated in some ways because all this attention is going to the child who's sick, but they're still kids. People still ask them, "What's wrong with your brother? What's going on here?" It's really important that part of this process is to give them words to be able to use and be able to express whatever it is they're feeling—A, to talk to the outside world, but also internally. Brothers and sisters—I'm an only—but brothers and sister, there's always some type of rivalry going on, right? When you have a child who's injured, there's even more, because you feel there's no way the parents are not going to be spending more time with that child who's injured, because you want to go to the wounded bird more, and you can't. You need to make sure that you're giving both those same weights and finding ways to celebrate both, even though they're not going to make progress at the same level, and in some cases, maybe they won't make progress at all. Again, trying to find those celebrations and those joys and address those issues. It's interesting to watch, especially over time. Whenever a child is injured initially, everybody from school comes, everybody wants to be there and wants to help in how to support that family, but by year seven, it's entirely different. Those kids who he was in school with then are not in school now, and you see other children progress and your child isn't, and it is really important to make sure that the families have the ability to access the treatment they need to be able to cope with all those things. Sometimes that gets to be last on the list, always, right? I've got to deal so much with every other thing that's now in front of me, I don't have time to address that, but if parents don't address that, it gets in the way of the ability to care long term for that child, because you don't have the skills you need, just like the sibling you need to give the words to, you need to have the tools to help that parent put those things in perspective and take care of themselves as well.
Posted on BrainLine August 8, 2013.

Amy Mansue is president and chief executive officer of Children's Specialized Hospital. She provides leadership to an extremely skilled team of clinicians and therapists providing specialized care for children. 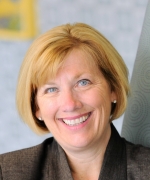