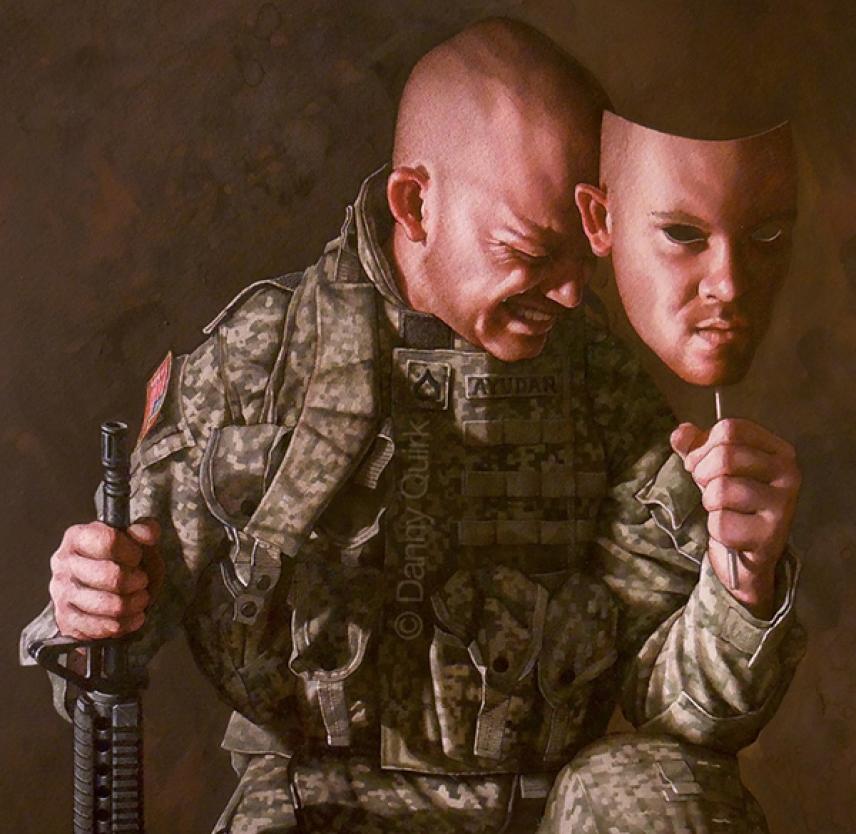 About a year or so ago, while my wife was out with our two daughters doing “girl stuff,” I was home with our now 3-year old son. He came up to me with his sister’s Elsa dress from the Disney movie, Frozen, wanting help putting it on. My first reaction was, “Son, dresses are for girls. You can’t wear that. Let’s go get one of your trucks or toy guns.” Then, I stopped; what was I thinking? Why was I reinforcing gender stereotypes when I had been working so hard to break them for myself?

When you’re a man in society — not to mention a Navy SEAL in special operations — you are taught that the best (only) option is to be the strong, silent type. You can’t let your emotions control you. You can’t be sad, or too happy. Really, the only acceptable emotions for the masculine persona are stoicism and anger. That is not accurate, of course, but that was what I perceived for a very long time.

In 2005, after a reconnaissance mission that ended very badly where several SEALs — several of my very close buddies — were killed in a firefight in the hills of Afghanistan, my emotions started to overwhelm me. But instead of dealing with them, I tightened the masculine mask to my face. After all, there is no space to break down in wartime, nor room, I thought, to show my true emotions to family, friends, and comrades. Suffering from PTSD comes with layers of challenge, but so does trying to squelch triggering emotions and memories. The story I was telling myself — silently, painfully in my head — was that I was weak, I wasn’t as strong as my SEAL brothers, I didn’t belong with them, I didn’t deserve to be alive. Men better than me had passed away.

I kept my mask fastened for years. I only cracked when I was alone. Following that 2005 operation, while still in Afghanistan, I went back to my tiny plywood hooch, curled up on the floor, grabbed the pillow off the bed and just cried into it. (This is the first time I’ve actually ever admitted this to anyone.)

It wasn’t until I started meditating that I realized that the story I had been telling myself — and believing — no longer served me. In the book, Reinventing Masculinity (see below), the authors argue that the generally accepted mold for a man includes the conqueror, the provider, and the protector. Three roles, that’s it, anything else and you are not manly, masculine. Living within those parameters, they assert, is living in “confined masculinity.” Instead, if you add something else to the conqueror, provider, and protector … maybe the nurturer, artist, or philosopher, you can live in “liberated masculinity.” You are no less the conqueror, provider, and protector; ironically, being more open, honest, and vulnerable actually makes you more of a man. It took me a while — and believe me, I still have to fight to keep my mask from my face at times — but I have learned that showing up with all my strengths and weaknesses and my myriad shades of emotions, which make me who I am, is actually courageous, the opposite of weak.

After about two months of practicing meditation, I started to see a drastic change in how I was feeling, and how I was performing — mentally and physically. And other people noticed, too, asking what I was doing differently. One guy even asked me what I was on, so the change was that drastic. At first, I felt fearful about telling people. I mean, I was still an active SEAL and meditation is only for women, hippies, weirdos, and monks, right? But I finally took a leap of faith and started sharing what I was doing. Not a single person judged or walked away; they wanted to learn more.

The more I meditated, the more my story of being weak lost power. It simply deflated. Sure, I still catch myself sometimes judging or berating myself, but now I have tools and a deeper understanding of why we tell ourselves these negative stories in the first place.

What is the story you have been telling yourself? Maybe it’s time to let it go, retire it — for yourself and for everyone around you, including your sons.

For the Love of Men: From Toxic to a More Mindful Masculinity – Liz Plank

“Armor Down, Daddy Up!: The Dad Edge” Podcast – Benjamin King