Retired NFL player Robert Griffith says he never blacked out or had to leave a game due to concussion, but he made 1,300 tackles in his career in games alone and "a lot of hitting goes on ... "

[Robert Griffith] I have never laid on the field, but I'm pretty sure that I have sustained a few concussions in my career, even at practice. I have 1300 tackles on this little body, believe it or not, and that's just in regular game activity— not playoffs, no preseason, no practice— and so there's a lot of hitting that goes on in order to get ready for a game, and I think—so to answer your question, of course. I've seen stars, I've been a little woozy, but I've never taken myself out, never blacked out, never laid out on the field. I was on an executive committee for the NFL Players Association, and one of the—I championed this group where we were trying to measure the stress on the body. It was seven of us—God, come on, Griff— Troy Vincent, Scottie Graham, a lot of guys in the PA. They're still involved. We were trying to, with our doctors, measure the stress on the body, meaning—I'll give you an example. And sorry if I'm talking too much, but I want to give you an example. We played Dallas in Dallas stadium. It was 122 degrees on the field. I went through four pairs of cleats that game. We had the rubber molded bottoms, and I looked up and the integrity of my cleats were breaking down it was so hot. It was a physical game. There's probably seven or eight guys that did not finish the game. And I left that game saying to myself, "Man, I'm glad I made it out of this game." When I got on the plane, I said to myself, "What did we just do to ourselves?" Yeah, we got a win. Yeah, okay. It was 122 degrees on the field. That group was trying to, with doctors, find out what the real stress on the body is because yeah, you've got sprains obviously, but there's heat, there's physical contact, there's dehydration, there's all these different factors. I'm a little deeper into the forces against a player in his tenure when he's playing, for sure.
Posted on BrainLine September 4, 2013. 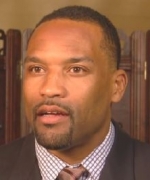