Nicole Wight
Related Content:
Laughter as Therapy for TBI Is No Laughing Matter
The Value of Therapy
Managing the Future for a Special-Needs Child
Using Technology as a Learning Tool for Kids with Brain Injury

Mother and caregiver Nicole Wight talks about how drum lessons have brought both joy and some recovery to her young son with a severe brain injury.

[brainline.org] [Nicole Wight - Mother and Caregiver] Basically, we had our really good friends, the Marinis. All their kids are musicians, and the mom was the first person that would take Michael for me ever for a play date without me being there. She said, "He loves to come over and play with my son and bang on the drums. I think you should take him for drum lessons." And I was like, "Where am I going to take him for that?" She said the Sweet Music Academy where her son went, Dave, she's like, "They have special instructors that would be great with him." "So why don't you look into it?" After kind of a week of sitting on it, I decided I would email the owner. I emailed him and I name-dropped. I was like, "The Marinis sent me," because I knew that they knew them. And I said, "This is the needs of my son." I said, "He has a brain injury. He has trouble walking. He's very hard to understand." "I'm not expecting him to be Neil Peart overnight, but I just want him to have a good time and I need somebody that can be very, very patient with him and allow him to have some joy." And so Jay got back to me and he was like, "I have a couple of instructors, but from what you're telling me, I think Mark is going to be the best one suited for Michael." "Why don't you bring him in and we'll check it out." So it started with I would go in with the lesson and I would sit in and I would tell Mark, "This is what he's saying to you." "Do you understand him?" Or, "He has trouble with his left arm." "It's hard for him with the braces to lift his foot to hit the pedal." And Mark was fantastic and he said, "All right, yeah. I got this." And then I eased back a little bit after that. I was like, "Are you okay with him?" And he was like, "I think I'll be fine if you want to go wait in the waiting room." And then what happened was Michael, one day we walked in and I was getting ready to walk back and he said, "No. You wait here. It's just the boys." And I said, "Mark, are you okay with this?" And he's like, "I'm good. I got this." He felt confident because I had very much prepared him and he knew what he was dealing with. And since then, I have not had to sit in on a drum lesson and I can take my guitar lessons at the same time, and we kind of have our own little time. Drumming has been a complete life changer for him. He's been able to get more movement out of his left arm and his legs. To me it's therapy for him, but he doesn't realize it because it's so much fun. Mark makes it just so much fun for him. I think drumming in particular when people are like, "Oh, your kids play instruments?" "Yeah." "What do they play?" "Oh, my son plays drums." They go, "Oh, my God. Poor you." Let me tell you, it's the most wonderful thing in the world to have your kid come home and just bang on a drum set and go crazy. He lets out his aggression, and it's joyful for him and he loves it and it makes him confident in something for once. It's not something where it's like, "Oh, you have to do it this way." Mark makes it that whatever is easiest for Michael and that's how he's going to drum, he does it. He challenges him, sure, but he does it the way Michael wants. And that's okay and that's the joy of music, and I think that's what it brings for Michael is just joy.
Posted on BrainLine November 14, 2013. 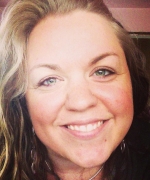