What You Bring to the Mat 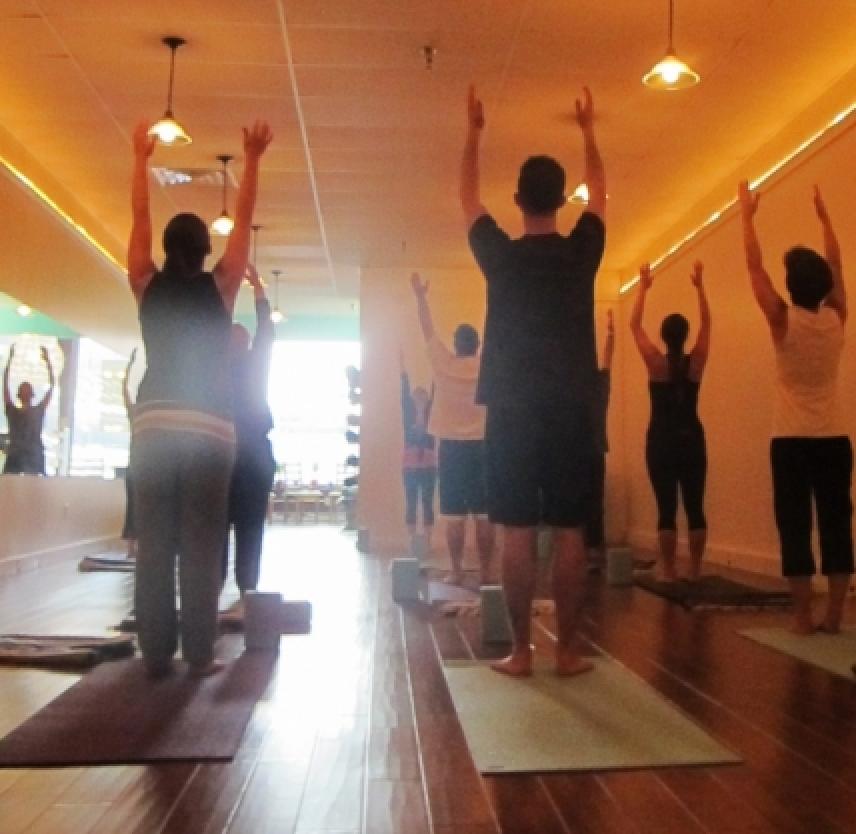 I see what yoga does for folks all the time. People come to their mats frazzled, exhausted, annoyed, or confused. The laundry list of emotions is endless. This goes for the good emotions, too, like overjoyed, fulfilled, satisfied, in love. Emotions — of any kind — tip the scale. Yoga brings the balance. Yoga is the midline, the center, the place where it’s not too much or too little. And whatever my students bring into the room with them, oftentimes they don’t take it all back with them when they leave. Somewhere in the space of yoga, all intensity seems to dissipate.

People leave — as my father would call it — smoother.

My first student of this variety was my father. (There are plenty of my words on our practice together, so no need for it in this post). He was the gateway into understanding the power of this practice and how it is mind-blowingly universal. I could no more understand the normalcy he ached for — to drive, to have the feeling in his left heel back, to not have an injured brain — than he could understand my wants — to find a good guy, to love my job, to not have a father with a brain injury. However, I did realize that if yoga could help me get back to my midline, then it could probably do the same for him. It did. Within months, his regular yoga practice had significantly enhanced his quality of life and brought things that we thought were too far gone back in balance — 15 years post-injury. I had to share this yoga goodness with other people who lived with brain injury. I had to get survivors to their mats.

It took three years and several piecemeal appearances at TBI support groups and rehab centers until I was invited to teach a regular class to wounded warriors with TBI and PTSD. I was utterly blown away by the positive results I witnessed. Every student brought something different to the mat — a different challenge, injury or frustration — and every student left with a sense of peace he didn't know he could find through yoga.

It wasn’t until just last week that I was able to really start this yoga-meets-TBI adventure. All the planning in the world to start up a class at a studio where I teach, a very special one just for TBI survivors and those who suffer PTSD, and I had no clue what to expect. I was positively nervous, which I’d shared with a fellow yoga teacher and friend. Not only had I invited anyone in the greater Pittsburgh area with any kind of brain trauma to show up to Bend Yoga and take a class with me, but now a lovely woman from NPR was going to report on this whole story.* She too was just as jazzed about the idea of yoga-meets-TBI. But holy cats, by the afternoon of that first class, I’d worked myself into the first case of hives in my entire life. That or it was the chicken pesto sandwich I’d had at lunch, I’ll never know. Oh, and I never get nervous. Then I remembered what I’d learned about expectations in yoga teacher training. LET THEM GO.

Seriously, things happen. We react. We control our reactions, but we sure as hell can’t always control the things. Heavy expectations simply don’t serve anyone. So I decided that the class could be a total flop. No one would show up. I could mess it all up or piss someone off. But it would be okay. And if not then, but someday this would all work out. LET THEM GO.

Ten people came — some I knew and some I didn’t. Everyone came for a different reason. My parents even came! The class turned out to be hands-down the biggest testament to why I am teaching yoga and why I am trying my damnedest to get a yoga practice to those people who need it, to people like my father and like the veterans with their “invisible war wounds,” to those with brain tumors or those who can’t control impulses. I want to bring yoga to anyone who lives with life-altering trauma. This is why I love to teach. Just hear what my students have to say.

I love to teach because it helps my students “sleep without benzos.” I love it because it “creates a buzzing sense of peace throughout body.” Because it “brings balance” of all kinds and because “it feels better than PT.” I teach because “it helps the brain and the body start to work together.” It doesn’t matter who you are or what you bring to the mat.

*That NPR piece did run, by the way.

I suffered with a TBI almost 4 years ago.  In recovery I found peace in yoga for balance, accepting, and connection with who I really am.  I am going to use these words in a scholarship that I am working on.

I do yoga 4-5 times a week and am trying to get my husband, who's suffered 2 TBI's to join me.  I'm hoping once he sees this article he'll change his mind.

My heart just sings reading this, what a wonderful piece! I am so glad I found someone else on this planet who is just as passionate in bringing the practice to those with various types of trauma. I have seen firsthand how yoga not only brings balance to people who are suffering loss, trauma, anxiety, and pain, but also how the practice has a way of bringing these people together to form a common ground. I hope some day I can spread your message within the military community, where the need is great. Thank you!

I wish I could have all of you in my class!! That was a great point about geographical location. To answer your questions: YES, there will be a DVD (and a book: Move Feel Think) coming out this summer. YES, here is the link to the NPR piece: http://wesa.fm/post/those-traumatic-brain-injuries-yoga-might-provide-some-benefit

it's also at the bottom of the article :)

Thanks for the reads!

Do they have this in Michigan for non vets?

I've 2 TBI's. The 1st when I was two years of age! I practice yoga and am now going to do many more classes than I already do. Your article has pushed me into action, a feat for anyone with TBI!

Thanx for this interesting and uplifting article!

Another great article.  Sharing your passion for the benefits of yoga, particularly for those with brain injury, is very inspirational.  Undoubtedly, if it wasn't for being in the wrong geographical location, there would be many who would love to attend your classes.  Maybe there's a DVD in the future?  Thank you.

Is there a link to the piece? Would love to hear it! Way to go, Janna!