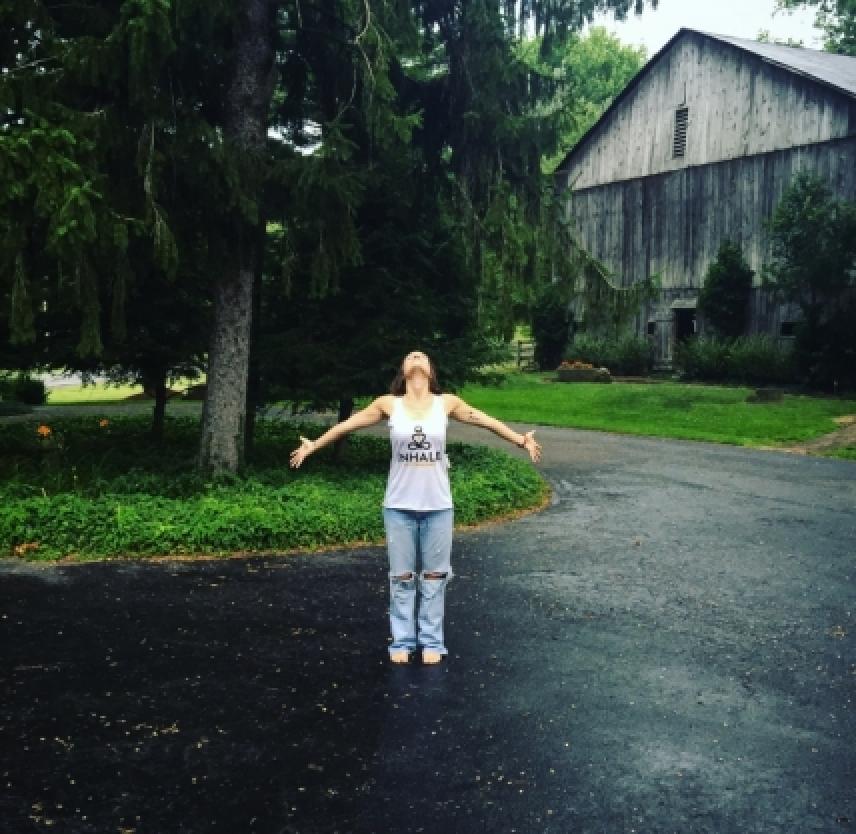 Saturday was the day after my dad’s first round of chemo—eight and a half hours spent sitting in a chair, having chemicals pumped into his veins to battle a rare ‘driver mutation,’ which is essentially a rare form of stage 3C lung cancer. Friday night he slept well, and Saturday morning he felt good, definitely good enough to do “normal activities.” You have to understand my dad because maybe a regular person (someone like myself) would never in a million years dream of mowing the grass the day after chemotherapy, but my dad is not regular. John Leyde is a strange bird. He’s weird. He beats odds. It seems as though he cannot be physically destroyed. Like a cat with nine lives, he’s the luckiest unlucky soul we know.

On this particular Saturday, while I was lounging in my yard with my best friend Natalie, who was visiting from Chicago, contemplating the effects of too much alcohol from the night before, my dad was mowing the grass. Later on, while I was trying to shower out the remains of the booze in my body, my dad was mowing the grass. While I was lying on my bed, staring at the ceiling wondering if the poison in his system was making him feel nauseated, my dad was mowing the grass. That afternoon, when my husband Chad, Natalie, and I were sitting on couches discussing our plans for the day, my dad stopped mowing the grass. Right about then phones started blowing up. First mine, a call from nurse I went to high school with, who left a broken up message about passing by ambulances and tractors, followed by three calls from my mother ending in a message asking us to call her back. But I had been too busy paging through a J. Crew catalog and asking if anyone wanted to go to the Mattress Factory museum to hear my phone. Next, Chad’s phone lit up with texts from my mother—asking us to call her, but “it wasn’t an emergency.” We called and called, but she didn’t pick up, so we waited.

“Well, I’m on the way to emergency room now,” she said. She sounded warm and sweet and mom-like, so I put her on speaker. “It seems your dad has fallen off the tractor and hurt his neck pretty bad. I don’t know what happened, but we hope it is only a bad sprain. He’s in a lot of pain right now.”

We learned that he was being transported to the nearest hospital, that no one knew what happened, and that people driving by had found him lying in the grass beside the tractor. He was moving, alert, and talking to my mom when the ambulance came, so that was “a good thing.” She’d call back when she learned more at the hospital. We sat and waited for her call.

“We-ell….” Her word cracked in two. “I guess I’m the bearer of bad news… your father broke his neck, and he’s being life-flighted to Pittsburgh.” At that moment, I felt something hard hit me in the chest, but not an actual thing; it was a feeling, a memory, a visceral fear. Tears dripped down my face. “Janna, I’ve already done this,” she said, now crying. And she had, we had. Who does this twice anyway? Twenty Julys ago she and I were chasing a Life Flight helicopter to a landing pad in Pittsburgh. Twenty Julys ago my dad was toying with life. Twenty Julys ago Steely Dan was playing a show in town. All the elements were too terrifyingly familiar. I ran upstairs to change, phone to my ear, as my mother and I made plans. We got organized. We talked about arriving on time, acting as next of kin, and making decisions. There wasn't any time for hopes and fears, just action.

“Nice shirt.” It was the first thing my dad said to me when we saw him hours later. I was wearing an old Hawaiian shirt from the seventies, one which I’d frantically dug from my closet in the hopes that he’d recognize its Jimmy Buffett-ness, along with jeans, because even in summer, hospitals are freezing. There he was, swathed in wires and tubes with his head squeezed through a neck brace. All evening Chad, Natalie, and I took turns visiting him and keeping my mom company while we waited for any doctor to tell us anything. Surgery? Damage? Lucky? When a transport nurse confirmed that he had only broken his first cervical vertebra (C1) and was moving from the ER to the trauma unit, we could breathe again. No surgery.

The hospital and its nameless doctors discharged him on Sunday evening, leaving Chad and me with the cumbersome experience of loading him into the passenger seat of my Volkswagen Golf, followed by a critical hunt for a straw because a bottle of water doesn’t cut it for a man in a neck brace. On the way to my parents’ house, he asked to listen to Steely Dan AJA. So we did, because if you have to re-live it, why not bring back all the details from that weekend in 1996.

It’s now Monday, and my dad’s safe at home. He’s going to be okay—as long as he sticks to the rules of his arduous recovery. Yet all I can manage to do today is drink my coffee and sit and listen to the rain, because I’m still too baffled by what just happened. Are we lucky or unlucky?

Thanks again for sharing your experience with us faceless readers. I learned about your story long before I had to grapple with the realities of TBI and unlucky luckiness in my own family, and it's been comforting to return to your words and know you have also endured what often feels like madness. My mother, who had a kidney transplant eight years ago, fell from a hospital bed and suffered a TBI which also lead to kidney failure. She was unlucky to fall from a hospital bed while on a route to full medical recovery. She was lucky to have a very clear prognosis in terms of new limitations, lucky to be very high functioning in comparison to other TBI patients. She was unlucky that her kidney didn't rebound from dialysis. She was lucky to get phenomenal care at a wonderful brain rehab. She was lucky to be able to return home. She's been unlucky to have battled seizures as she continues to recover. I'm sending positive thoughts your way. I'm sorry your family continues to face challenges and uncertainty. But thank you for sharing your words. They inspire me to try to make sense of my family's own strand of madness.

Good article thank you, I can relate in a way.  I had a brain hemorrhage in December, I'm recovering well thankfully, my dad died of lymphoma though two weeks ago, so it feels a bit like I've been hit with a sandblaster!  Take care, we can get through anything!

My family often comments of me that "if it weren't for bad luck, you'd have no luck at all." After the 4th time my TBI was compounded and I was headed back to rehab, I found it hard to argue with their logic. Four very long years later, I have faced the loss of my home, career, relationships, independence, competence, and so on. Mix with that the illogical, random deaths of excellent doctors, caretakers, and close family/significant others/friends I feel like a cursed bad luck charm myself. And yet the phrase "You're lucky to be alive" is thrown at me so often I want to smack those who say it. I have my blessings and I do my best to be grateful because truly knowing things can ALWAYS be worse is a reality I've been shown time and time again. I have thought very long and hard about the concept of luck. If it exists it's a tricky concept, and I've been shown both sides of the coin. Right now I prefer to dismiss luck all together (while secretly hoping for a suprise bounty of the good stuff), wonder why my karma seems so very off balance, and pray that I live long enough to find some meaning in it all. And like your dad mowing his lawn right after chemo it has to be a constantly active process. If I am fortunate enough to be alive...I better do some living.