When We Show Up 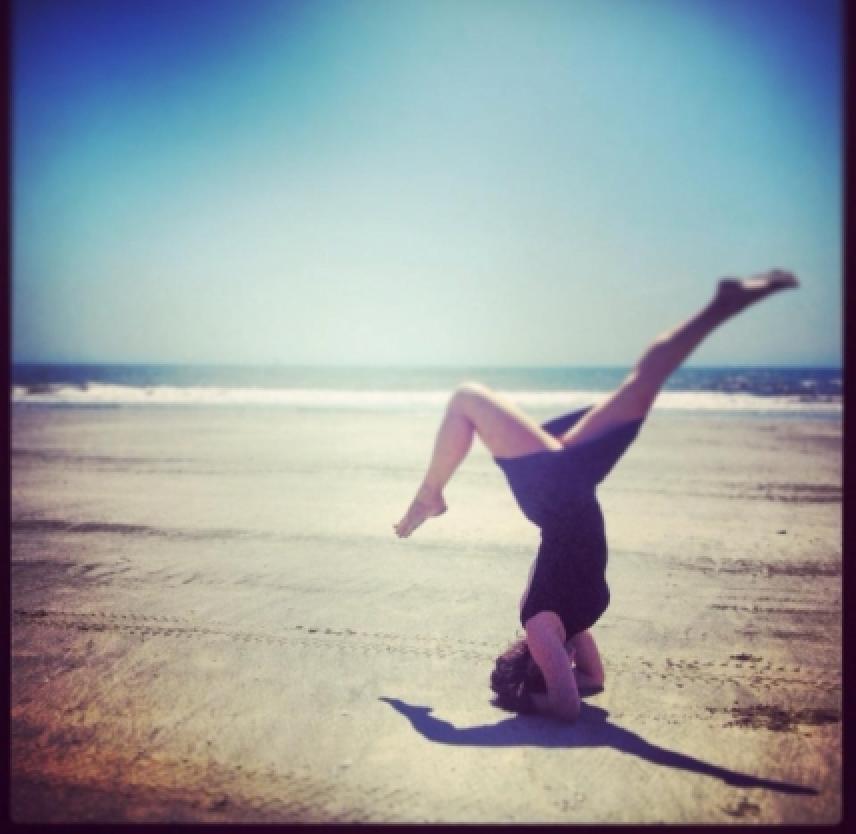 Yoga and brain injury came into my life one right after the other. Looking back, I have to wonder if the timing was coincidental. The winter before I turned 14, I had an insatiable need to learn how to do a headstand, so I coerced my grandmother into buying me a yoga book from the bargain bin — Yoga Mind & Body — a sturdy hardback filled with weird poses, breathing exercises, and ancient remedies. Yet my only interest was the two pages on sirsasana, or headstand pose. So many evenings of tumbles, thuds, huffing and puffing, and annoying my mother “with all that banging,” but, by the time the snow had melted, I’d mastered it.

It was only a few months later when a fluke car accident altered all of our courses. I wouldn’t practice headstand for another 10 years. That July we were smacked with what no one saw coming — brain injury and its cocktail of sadness, strife, awareness and acceptance. I had a new dad with a broken brain. I had to help out, had to grow up fast. I was saddled with a new responsibility of reminding my father of who he was supposed to be. Be more patient, more compassionate, more aware, less compulsive, less demanding, less angry. Please be more like “the old John,” because this man was not the husband my mother married nor the dad I knew. There was no reason as to why. But that is just how it is with brain injury — unfair.

Yoga found me again. It was almost 10 years later, and I was nearly swallowed up in the stress and the exhilaration of graduate school and a 20-something life in New York City. This time there were no books, no upside-down talents, and no moms to be annoyed with the banging. This yoga was the discipline of showing up. I walked into the hot, hot air of a Bikram studio and rolled out my mat on the slick of sweat — every damn day. I craved the intensity. The following year, my boss gifted me with a pass to her Jivamukti studio. Hello again, headstand. Easy as pie, right in the thick of other students, like I’d been doing it my whole life. Those yoga years were the detox years, when I thought yoga was physical. I had pounds to shave off, muscles to build, abs to tone.

I was also living with an ache so deep born from an unfairness I couldn’t shake. Until I could. Yoga became my medicine. All the bending and breathing, twisting and folding was starting to heal something. The more time on the mat, the more I could acknowledge the decade of feelings and fears I’d shoved under the surface. The more time on the mat, the less I asked Why me? Why him? Why us? Why brain injury? I let some of the unfairness go. I got to know myself — the good and the absolutely not so good. I got really truthful. I slept more. I ate better. I quit my job. I wrote a book. I became a yoga teacher. And in July of 2011 — 15 Julys after my dad’s accident — it was time to teach him.

My dad and yoga made sense. Yoga is the great connector, the discipline that, by definition, is the union of mind and body. Brain injury is trauma, and trauma creates a divide between mind and body. My father’s body was present, all things considered intact, but his mind was stuck on the man whom he’d been decades ago. To him, he was still the man without the brain injury. He was just the agile guy, witty, fun, employed, happily married, drinking beers with his friends and teaching his daughter how to play chess. All the specialized therapies, pneumonic reminders, journaling exercises, lists and his daily dose of big drugs could not seem to get his brain and body in sync. It was time to try yoga. After all, I was his kid and a certified teacher and there was no way I could break him. I promised these things to my mother and his therapists, and, most importantly, I promised that yoga will be good for him.

The most basic poses were like WD-40 for his body — and his brain. Most “activities” in my father’s life take a major prompt, but when it came to yoga, he just kept showing up.

He liked it. “The yoga gets my mind and body to talk back and forth.” my father will tell you. “It helps me be more normal, and I got away from being normal—way off track.” Toward the end of summer, we all saw the changes. He exercised more compassion and more control over his impulses. His conversations and interactions came with more ease. He was gaining acceptance of his limitations and an awareness of his brain injury. Yoga was — is — good for him.

Today I teach yoga full-time. That is, when I’m not writing. I teach my father, and I teach many other students of various ages at various levels in studios and gyms, and in my Pittsburgh apartment. I also teach people with brain injury. I continue to be in awe of the practice and the positive change I see. I see a war veteran with TBI sleep his first few nights since the IED blast without benzodiazepines. I see a man with a frontal lobe injury stand tall, blink his eyes closed for a second, and not face plant like he used to. I see a woman stop chasing her breath. I see people — like me, like my father — get to know and love who they are now.

Trauma, injury, loss, extreme sadness, unexpected events, and pretty much anything we don’t plan on is unfair. But we have yoga, which I believe offers us that certain something that nothing else seems to get at. It’s the path away from the unfairness.

All you gotta do is show up.

Excellent - very well written, and from the heart.

For you it was Yoga, for me it was wrestling.

I just found yoga three years post injury. The change it has brought to my life is amazing. Thank you for sharing your story! It helps validate my thoughts.
Stunning article. I love the sense of healing and hope I got from just reading . Very inspirational, thank you Janna. I need to find out more.
I like this article very much and am glad yoga has been so beneficial for your dad. I have seen the benefit of physical activity in myself as well, motorcycle crash 2001. Thank you for writing this.