The Dying Will Do What The Living Will Not: Applying Mindfulness and Meditation to PTSD 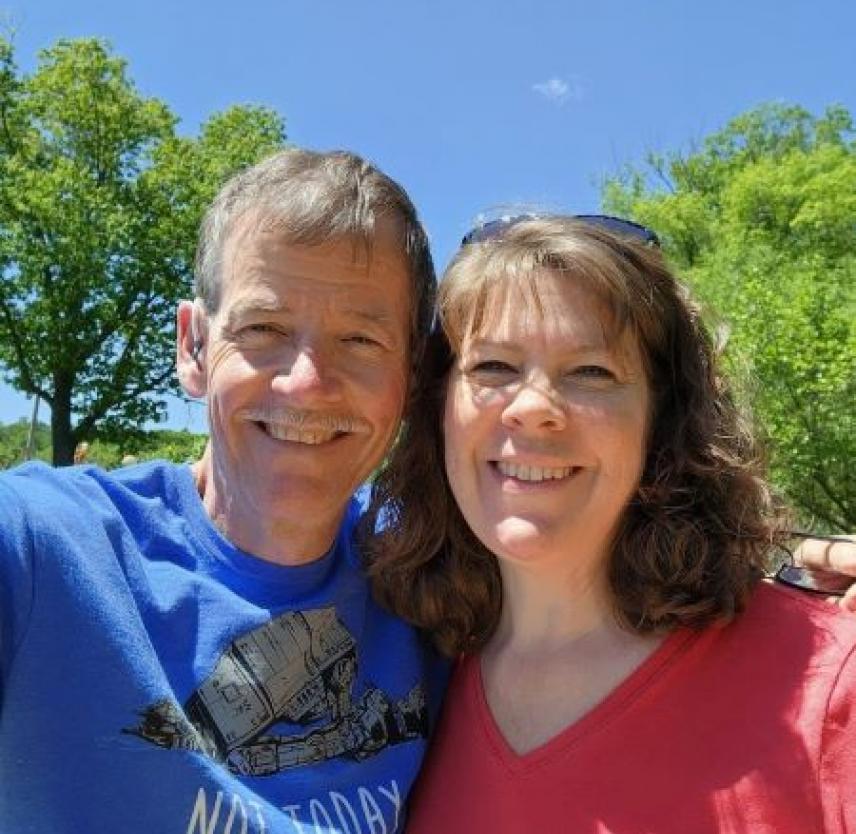 David and his wife smiling in the summer sun

Last month was one to celebrate. While I didn’t win the lottery, per se, I’ll take last month’s victory over lottery winnings in a heartbeat. Plagued by PTSD night terrors since my injury well over a decade ago, last month I only had two nights over the course of the entire month where I woke up screaming.

My PTSD is a textbook case: I was involved in what easily could have been a fatal cycling accident back in 2010. My physical injuries included broken bones, lacerations, torn tendons and ligaments. All have since healed. My “unseen” injuries included a traumatic brain injury and a persistent case of PTSD — one that has haunted me almost unabatedly for 11½ years. Like many who remember traumatic events, my PTSD was almost immediate.

Within weeks after my accident, the symptoms appeared. I was unable to be in crowds of any kind, abject terror at the very thought of being around a lot of people. My startle reflex amped up to levels I never knew possible. Approach me from behind and you would see me almost jump right out of my shoes. However, the night terrors tormented me the most. For the first several years, I would average 10-15 bad nights a month. Waking up screaming, completely drenched in sweat and not knowing where I was, is something I would wish on no one. My wife, Sarah, logged these by notations on a wall calendar — small happy faces for good nights, and small sad faces denoting the nightmare nights.

Since time-out-of-mind, I’ve been a solutions-bound person. Show me a problem, and I’ll do my best to find a solution. Being open-minded meant that I would try just about anything. In fact, in a 2014 Brainline blog post, "The Day I Met Little Bear," I wrote about my experience at a local Pow Wow and meeting with a Native American healer, a present day medicine man. As a close friend of mine says with regularity, “the dying will do what the living will not.”

Over the years, I sought out therapy. Cognitive therapy, while helpful to many, was wholly ineffective for me. Several years ago, I began EMDR and it showed very strong promise. I had almost immediate relief. Then the pandemic struck. Just the thought of being in a small office with a therapist in a face-to-face session was overwhelming. A phone-based EMDR app did little to replace my face-to-face doctor visits. At 11 years out, I found myself again sinking in PTSD quicksand, struggling to regain my footing and desperate to try anything that would prevent me from descending back into the literal hell that life can be with PTSD.

So what changed? How did I go from yet another complete and utter defeat to some of the best weeks of my life? Enter virtual reality mindfulness meditation.

As a consummate reader and lover of tech gadgets, a few articles appeared in my news feed about applying mindfulness to life with PTSD. In reviewing various mechanisms to learn more about this practice, I read about an app named Tripp for the Oculus Quest VR headset. I decided to give it a try. At only $19.99 for a full-year subscription, the cost was less than a single co-pay. I literally had nothing to lose and certainly something to gain.

A couple of months ago, I committed to daily mindfulness/meditation sessions. I’ve only missed a couple of days since April. As much as I’d like to say the results were immediate, they were not, but I could sense that something within me was changing. You can’t rewire an entire home in a few days and that was exactly what I was doing. I was rewiring how I think and how I perceive the world, along with where I fit into this complicated world that we all share.

As the weeks passed, I began to notice smaller changes: I was more present in the moment than I had ever been. I found a new peace by no longer letting my runaway brain ruminate over things that I had no ability to change. Being mindfully aware in the present moment meant that the past no longer owned me and that there really was no such thing as the future — there is just the here and now.

A few weeks ago, I said something to Sarah that I never expected to say. “I’ve never felt as comfortable in my own skin as I do now.” How can you even put a price on that?

I realize that I am a newcomer to the world of mindful meditation and that I still have a lot to learn. But the reality is this: once I am asleep at night, I have no ability to control the outcome. I cannot will my way to a terror-free night. I know this from firsthand experience. Yet, here we are, a couple of months into practicing mindfulness/meditation — and the overall quality of my life is decidedly better.

Just last week, I was asked to speak for an organization that supports brain injury survivors. One of the other speakers at the event was a neuropsychologist from the Love Your Brain Foundation. His topic was the newly emerging data about the effectiveness of VR meditation as it relates to improving the lives and outcomes of brain injury survivors. I smiled all the way though his comments, hearing outside validation that I am on the right path.

How will this work from a long-term standpoint? I try to be mindful of not thinking like that. Being present in the moment means that I am trying to let go of long-term expectations. I can share that right here, right now, I feel good. This present moment is one without anxiety, dread, or fear.

Every journey is different. Recovery from a TBI and PTSD is not linear. There are ups and downs, forward progress, and painful setbacks. My hope for you, if PTSD happens to be a thread in the fabric of your life, is that you are open to trying non-mainstream solutions. And in doing so, that you can find a measure of peace.