The Day I Met Little Bear 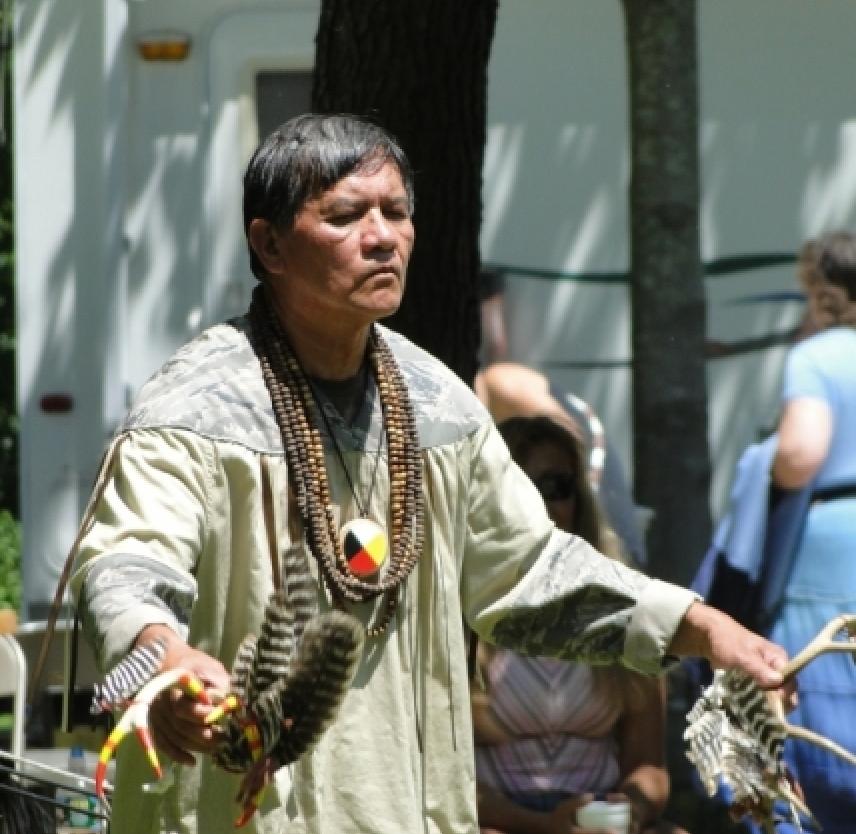 He introduced himself as “Little Bear” as he handed me his business card. And the title on his card read “Native American Healer.”

It was the last place I ever expected to be. I had reached the point of pure and unadulterated desperation. Half way through year two as a person with a traumatic brain injury, life as I knew it was more painful than anything I had ever experienced. I had reached the jumping off point. Thoughts of suicide were rampant and I was quickly running out of options.

Sarah and I did our best during those abysmally tough first two of years after my brain injury. In an effort to maintain some semblance of normalcy, we continued to do many of the things we did before I was hurt.

One of our favorites remains unchanged to this day. So often, we’ll hop in my car and drive north to the White Mountains of New Hampshire. There is something healing, something cathartic about being at one with nature. Away from the daily hustle and bustle of life, away from traffic and shopping malls, our trips to the North Country always leave us both re-centered.

So it was only natural that the North Country would call to us during this difficult time.

Passing a roadside sign almost too small to see, the words Pow Wow Today caught my eye. A quick u-turn found us pulling into the parking lot — with events unimagined about to unfold.

For a reason I still can’t explain to this day, I left my shoes in the car and chose to walk barefoot. Maybe I innately knew that I wanted to feel more connected to the earth. After all, some of the best things in life happen when you are barefooted. Sarah and I were married in bare feet, but that is a tale for another time.

A small kiosk at the entry to the tribal grounds collected a voluntary donation and it was there that I first noticed a palpable sense of spirituality. There was the smell of burning sage that hung heavy in the air. And there was the sound of drumming off in the distance that seemed to connect me from the ground up, reverberating through to the core of my broken self.

I watched people approach the kiosk. As someone with a brain injury, my disabilities are invisible. But those approaching the kiosk wore their disabilities with honor. I watched young parents pushing a child in a wheelchair. People hobbled in on crutches. A couple of kids with Down’s Syndrome were among those I first saw. The list goes on. Like pilgrims to the Ganges in India, they came to be healed.

At a year-and-a-half into my new life, I was in the toughest shape I’d ever been. Other people whom I’d met told me that they, too, had found that the first couple of years post-injury were the hardest. They also shared that it would get easier. I just never imagined it would be so hard.

So, what kind of shape did I find myself in at the eighteen month mark?

My dual diagnosis included a brain injury and post-traumatic stress disorder. At eighteen months, my PTSD was kicking my backside. The wail of an ambulance siren more often than not would reduce me to uncontrolled tears. But far worse than that were the nightmares. Three to four nights a week, I would awaken whimpering, screaming or crying hysterically from nightmares of all makes and models. Sarah did her best to coax me back into the land of the living and away from the demons in my head. But, ultimately, she would fall back asleep and I would lie there in abject terror wondering what was coming next. I wrote in exquisite detail about this time in my recovery in my book Metamorphosis, Surviving Brain Injury and truth-be-told, it’s tough for me to look back and read about it to this day.

Daily, I would walk around in a perpetual state of sleep deprivation, and nightly, I would come to great harm in my sleep. Almost from the get-go, I had made the decision that I would go to any lengths to get as well as I could, to do all that I could to live successfully as someone who had sustained a brain injury. I knew I wouldn’t fully return to my pre-brain injury self, but I was determined to get as close as I could.

Slowly, I learned that I could sometimes simply coexist with my brain injury, while at other times, we put on the boxing gloves to spar for a round or two.

From cognitive therapy to a great support group, from a well-intentioned psychologist to devouring everything I could read, nothing seemed to work for my nightly trips to Hell and back.

Such was my condition on the day of the Pow Wow.

A Native elder was smudging those wishing to be healed. I stood in line, eyes filled with tears. How did I get here, to this point of sheer desperation?

Sarah and I spent the next couple of hours walking the grounds, watching the Grand Procession, breathing in all the positive energy and enjoying the healthy distraction from the torture life had become.

Heading back to our car, we passed a tent with a sign outside.

“Native American Healer,” the sign read. His prices for sessions were listed below. Five dollars for 15 minutes.

“Do you want to try this?” she asked with just a hint of encouragement. She knew my state; my state was “our” state.

Sheepishly and a little embarrassed, I said yes. Heck, what did I have to lose? Five bucks is not a bank-breaker.

The tent flap opened and out came a man 10 years or so my senior. He looked gentle. He looked kind.

I can’t tell you all that happened inside his tent. Not that I don’t want to, I simply don’t remember it all. We talked for a couple of minutes. He asked me what I was looking to be healed from.

Eyes closed as this twenty-first century medicine man performed his ritual, a ritual most likely passed down through the ages. I could feel the bass beat of the drummers through my core. Soft words were chanted in an unfamiliar tongue and incense burned. Eyes wide as I emerged from his tent, I flipped him a ten.

“I don’t need change.” I thanked him and went off to find Sarah.

For the next two weeks, the nightmares completely disappeared. I slept as I had not slept since my brain injury. I would love to share that that was the end-game for my PTSD nightmares, but it was not. A couple of weeks later, they came back with a vengeance — and remained with me for the next year.

Gratefully, at two-and-a-half years after my brain injury, my nightmares abruptly dissipated. A medical professional called them “self-resolving.” These days — now well into year four since my TBI — I might have one or two bad nights a month. Compared with what it had been, I am quite okay with it.

Like so much that encompasses living with a brain injury, recovery timelines are measured not in days or even weeks, but in years.

Just the other day, Sarah and I passed the tribal grounds where these events came to pass. The gates were closed and two feet of snow barred any entry.

I couldn’t help but smile at the memory of that July day.

I am grateful to no longer live in Nightmare Alley. And I am grateful that I have experienced full-blown PTSD. That may sound odd, but my experience means that I can better understand others who fight similar battles.

And that alone means that my challenges were not in vain.

THE AUTHOR, DAVID GRANT, HELPED SAVE MY LIFE & ENCOURAGES ME DAILY! THANK YOU FOR ANOTHER AMAZING PART OF YOUR JOURNEY!
Interesting. Maybe this tribal ritual brought your inner peace forward and calmed the rage that was inside of you. Your journey has you headed for blissful things. This I wish for all who are on the same journey. Even caretakers go through a phase of Post Traumatic Stress. Your strength and encouragement is my counseling to help my daughter. Keep it up.
It has been 9 years for me. In my experience your experience with Little Bear is another piece of life that becomes the healing process. I've had many of them. The best are the sharing with others who have the same illness. Mutual healing in a very simple but extraordinarily effective way. I would not say my brain injury and PTSD have changed me for the better because I no longer know what life would be like without it.
I can relate so much to all you share in your blog. I am not quite seven years out. I am finishing a rough draft of my book. I had never had anything published before. Did u self publish...how does that process work. Love your blog. I cry thru every post.
Thanks for writing this blog. I am a mother of an 18 beautiful son who suffered a TBI skateboarding, with a helmet on! Reading your blog makes me cry because I had no idea this kind of help was out there. Our son recently tried to commit suicide, and although he did not succeed, we live on pins and needles while trying different medications. All of this is just now (after a year) coming to light as being related to his TBI. The problems you talk about are exactly what my son experiences. We are getting help, but this blog also provides help. Thanks again and I will continue to read. All the best in your journey of healing.
Thank you for sharing the medicine man story. Appreciate it. About as close as I have come so far in understanding small aspects of brain concussions is summarized in films like The Secret (2006) (wholesome thoughts/thoughts are things) and rare accounts about medicines like Dilantin and caffeine (Tirend, NoDoz) which work a little for some. Best wishes.
Thank you for sharing your story!