Dr. Robert Cantu talks about the research being done with helmet and headband sensors as well as other tools to study the effects of subconcussive hits on athletes.

[Dr. Robert Cantu] Well the thinking behind why subconcussive hits are important is that in our Brain Bank work we have brains of individuals with Chronic Traumatic Encephalopathy that had no recognized concussions, yet had thousands—if not tens of thousands in some instances—of subconcussive hits. So we know subconcussive hits from our experience with the Brain Bank count, and we also know of a number of studies using functional MRI, using diffusion tensor imaging MRI, and using neuropsychological studies that have shown deterioration in those modalities just from the hits taken over the course of a season even when someone has not had concussion symptoms and would not be diagnosed with a concussion. So subconcussive hits, we believe the evidence shows, do count. What the number is we don't really know today, and we don't know the relative importance of a subconcussive hit of say 20g versus 40g versus 60g. Obviously a subconcussive hit of a higher g-force probably is more injurious than one of a lower g-force. But we're involved with this Hit Count initiative, Sports Legacy institute is, and we hope to be accumulating hit counts in all of our collision sports because we now have sensors that can be worn, not in just helmeted sports but even in sports without helmets, using sensors that are embedded in a headband. So say it could be used in soccer or a sport where a helmet wasn't used. The sensors are different. Some of them involve football helmets, and the sensors are embedded within the helmet between the padding. Other sensors are embedded in a band that you wear on your head and, therefore, could wear under a helmet or could wear just alone. So playing soccer or a non-helmeted sport you could use it, such as basketball. Other sensors are embedded in mouth guards, and other sensors are embedded in a chin strap. So there are a variety of modalities out there. They record linear, and some of them record both linear and rotational accelerations. In the very beginning, it's been the consensus of the medical panel that we'll only look at linear recordings, and we'll only look at numbers, and we'll only look at numbers above 20g. But over time we hope to be looking at linear and rotational, and we hope to be looking at how high the impacts were, not just the number.
Posted on BrainLine August 30, 2013. 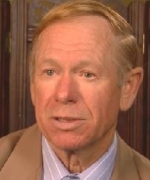