Why I serve: I want to give every moment 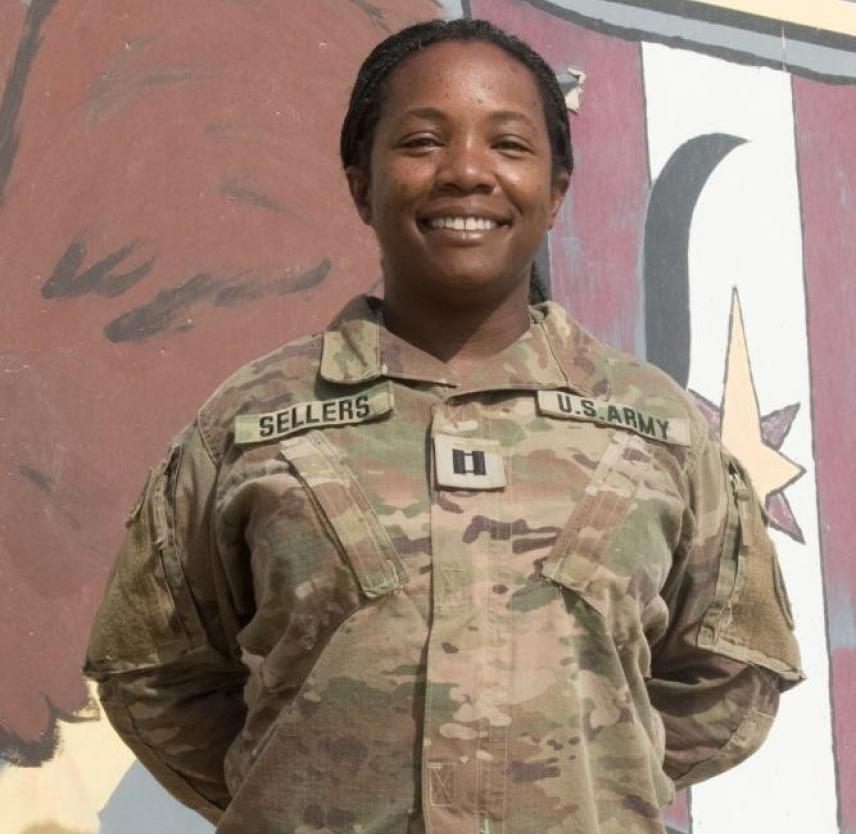 CAMP BUEHRING, Kuwait — Capt. Dawn D. Sellers knows she can’t save the world, but prays she can at least reach a couple of Soldiers during her time here.

The psychiatric mental health nurse practitioner has been deployed here since May working at the 3rd Medical Command’s Gaining Resilience in Theater, or GRIT, Clinic here practicing battlefield acupuncture and providing supportive therapy and psychoeducation—therapeutic intervention that provides Soldiers with tools to help them heal.

Sellers, a native of Mechanicsville, Virginia, said serving Soldiers in a deployed environment is helping her fulfill a purpose she didn’t know she had until her son became a Soldier who needed help.

A mother’s love knows no bounds

Sellers has been a nurse since the 90s. She went into the field right after high school so that she could provide a good life for her son, whom she’d given birth to at age 15.

The captain said her son’s father died when her son was 12, “right when you get to the age where you need somebody.”

Sellers’ son struggled throughout high school without a father to guide him, and the nurse said she struggled getting him access to community programs like Big Brothers Big Sisters.

“I had this bright idea—I’m like, ‘you know what, he’s struggled, I’m teaching how to be decent but I can’t teach him how to be a man—so how about the Army,’” the captain said. “They’re plenty of those in there, let’s do this.”

Sellers encouraged her son to enlist in the National Guard so that he could be mentored, but stay close to home, and her son agreed and shipped off for basic training and advanced individual training.

“Right out of AIT I get the call that he’s going to Iraq, and so I was like, ‘that’s pretty devastating,’” the captain said. “He went to Iraq, and thank God he came home, but when he came home he was so different.”

Sellers said her son was completely withdrawn and had difficulty taking care of himself. Even though she had more than 20 years’ experience in nursing, the captain said she did not know how to help him.

The nurse took her son to a Veterans Affairs medical center, but initial treatment did not work, so she took him back for a second round of treatment.

“The psychiatrist said, ‘hey, if I’d been through what he’d been through and seen what he’d seen, I’d probably be depressed too, see ya,’” Sellers said. “I said, ‘I can do better than that,’ so I went back to school.”

“I went back to school so that I could get a better understand about what was going on with him,” the captain continued. “It turns out he has PTSD, and he had a really bad case of it.”

Sellers said her education helped shed light on the post traumatic stress her son was experiencing, and that despite resistance, she started to get through to him.

“I was like, ‘you know this really bites and I do not want any other mother to have to experience this, so if there is any way I can do anything to help that not happen that’s what I want to do,’” the captain said. “So I started seeing if I could get into the Army with just the explicit desire to deploy.”

Sellers had a lot of hoops to jump through to get a direct commission at a more advanced age, but she persevered and commissioned on Aug. 30, 2016.

While she was waiting to get into the Army Sellers pursued work at the VA, but was not able to get a job. She was, however, able to land a job in behavioral health at Fort Lee, Virginia, where she works with Soldiers in the U.S. Army Training and Doctrine Command.

“When I leave here and get back stateside, I get to get [Soldiers] when they get back or get them just before they leave,” the captain said. “Sometimes interrupting that process with acute stress can help make sure that it doesn’t end up at PTSD down there.”

Sellers thought she could deploy once she got to her unit, but she had to attend the Basic Officer Leader Course and other required training. When the opportunity to deploy here finally came around, she jumped on it.

“I absolutely love my country but my sole purpose is to serve the Soldiers—I want … to be that one person who wants to be here,” the captain said. “I want to give every moment and take every opportunity to serve Soldiers.

“[Being here] is an opportunity to make sure that young men and women who make the sacrifice to serve their country will have the opportunity to have a quality life when they’re done with that,” Sellers continued. “I feel so grateful, and I get up every morning, and as I am making my way across the rocks to the bathroom, saying ‘I get to be here’—I cannot believe that I get to be here.”

The nurse has found that just lending a willing ear to a Soldier can make a big difference, and she has discovered that many Soldiers are asked to carry a huge burden.

“The Army and the things that we have to do to defend the nation—because at the end of the day, I don’t care what your MOS is, at the end of the day we are put here to defend the nation, whatever that means—and what it takes to be able to do that, and to do that well, is going to put stress on even the strongest,” Sellers said. “If you come in and you already have chips and cracks, with that stress you’re going to fall apart.

“[Soldiers] have to do a mission that requires them to do things that some of them have told me meant that they had to put their humanity aside,” the captain continued. “You need somebody, and you can’t just go home and talk about that.”

The captain said she is grateful to help Soldiers, but would like to see the Army prioritize behavioral health services and destroy the negative connotation for seeking help.

“The mandate is people first, but the stigma is still there,” Sellers said. “I get patients that come in and they say it’s frowned upon to come and get help but I just couldn’t take it anymore—I hear that more than you would imagine.

“I am hoping that with the mandate there is a crack in the stigma,” she continued. “I hope for the floodgates—I absolutely hope that people start coming to view their mental health as they view their physical health.”

While she waits for change, Sellers works to help create change in the lives of her patients. Tears gather in her eyes as she holds a card that one of her former patients who has redeployed mailed to her. In the card, the Soldier thanks her for helping him through a difficult period of his life.

“It feels like warmth … it felt absolutely thrilling,” the captain said. “This helps me know that I got at least one.”

Author’s note: Capt. Dawn D. Sellers said joining the Army has opened up another door with her son where they can speak a similar language. She said it has been a slow process, but her son is finally in counseling, is taking medication and is holding down a job. “He’s back to being a contributing member of society functioning on his way to healing,” she said.