NeuroStorm of the Century, Part 2 of 3: All Forms of Communication 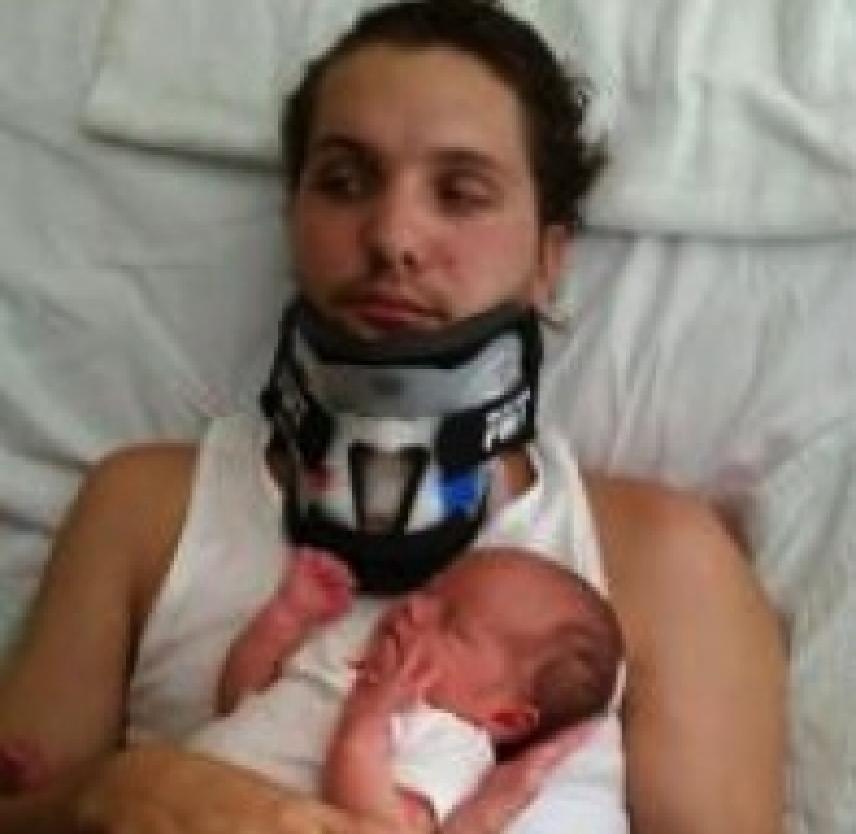 This is part two of a three-part article:

As Josh lay in a deep coma, with a Glasgow Coma Score # 3, after he had fallen 50 feet from scaffolding while he was working construction, our family was informed that IF he were to wake up, it would be a miracle. If he knew who we were, it would be awesome. And if he could ever walk again, or be able to communicate with us again, it would be incredible. I felt numb and sick with that information and I refused to believe a word of it.

Ten days into his coma, Josh gave us a miraculous thumbs-up on command, letting us know that he was still with us (and we knew that at least one of his arms was not paralyzed), but that was the extent for a while. After three weeks into his coma, he emerged with what the doctors called an “altered mental status.” This continued for another three months while he resided at the hospital and as the trauma surgeons stabilized his massive internal injuries with 26 extensive surgeries during that time.

Around the 4th week, Josh’s way of communicating was to give us the middle-finger salute. The nursing staff informed us that this is very common when patients start to come out of a coma. Personally, I could completely understand the level of frustration and pain Josh must have been feeling at that time and I was so glad that he was pushing through this, that I was willing to take any hand gestures that were directed toward me, even though he had never referenced this gesture to me before, at least not that I was ever aware of. But I must admit there were times I took it too personally and would feel pretty sad. Soon he had progressed to a speaking valve in his tracheostomy tube, and was learning how to swallow. The speaking valve only gave the middle finger more input as Josh angrily whispered the meaning of the middle finger, directing it at any person that frustrated him.

Then one day, his nurse asked, "Josh, would you like something to eat?" Josh became unexpectedly alert. It had been five weeks since he had eaten any food orally. Josh muttered through his speaking valve, "I want shrimp scampi and rice." My husband and I were flabbergasted by his request as we were at his bedside. That was one of Josh’s favorites, he remembered, and he asked for it by name! I was so incredibly proud of him. Then I looked at the nurse, knowing full well that it would not be possible.

She said to Josh, "We can do that for you! I will put the order in right now." Josh was so happy. I looked at her all puzzled and she whispered to me, "Pureed tuna and cream of rice." I just smiled. It wasn't long before the meal arrived, and I was feeding Josh. He was so happy, and he ate the whole thing. Thankfully, that meal seemed to end the issue of his "middle finger" form of communication.

Josh’s neurostorms occurred several times each day and night, lasting from 5 to 60 minutes. He was given a variety of medications for his numerous trauma needs including Gabapentin, Propranolol, and Clonidine to help control his neurostorming episodes. In the beginning, the electronic monitors warned the nursing staff of Josh's neurostorms. As weeks and then months went by, the monitors were gradually removed and it became more important for family and friends to communicate with nursing staff regarding Josh's neurostorms.

While watching over Josh, I noticed that his neurostorms and agitation surged when the Nebulizer C-PAP treatments and tracheostomy suctioning was performed. After sharing my observations with the nursing staff, they encouraged us to handle it with the “team approach” to support him. So, Josh’s friends, Ben and Marc, purchased adjustable fans to help cool him, while his girlfriend, Allison, and I soaked up his sweat continuously with towels to make him more comfortable. After Josh's pneumonia cleared, the Nebulizer C-PAP treatments were discontinued, and his neurostorming decreased considerably. However, during times when Josh’s Gabapentin medication schedule was being changed or adjusted, his neurostorming would increase significantly, although when his Gabapentin was given around the clock every six hours exactly, minimal neurostorming resulted.

Josh’s neurostorms created some unusual effects: they would cause his blood pressure to rise, and his pressure would be significantly different when taken on the right arm versus the left arm. The neurostorming would also occasionally cause the pupils in his eyes to react differently; the left pupil would dilate (expand), and the right pupil would stay small. The accommodating hospital staff allowed Allison and me to spend the nights with Josh. This helped in observing and learning about and reporting these neurostorms to nursing staff since these neurostorm episodes would come and go rapidly.

As Josh's Mom, caregiver, guardian, and advocate I knew that effective communication with each rotation of nursing staff was vital for his long-term care. Josh had so many injuries, therapies, and topics to address at that point that were unique to his particular TBI and neurostorming.

It was extremely beneficial being there for Josh each day when the doctors made their rounds. To miss their medical information about Josh and his surgical issues and medication management could potentially end up requiring a long duration of HIPAA paperwork to fill out. Allison and I would take shifts eating at the cafeteria or bringing each other food, so we would not miss rounds with the doctors from all of the different specialties that Josh's needs required.

It was interesting to view his care from a nursing perspective. Even though I was very familiar with medical procedures, having worked in hospitals and clinics for over the past 30 years, I couldn't help but notice that the simple protection device of wearing gloves (which of course are mandatory for many reasons) actually causes the inability to physically feel the patient. The lack of this physical sensation that would naturally inform a nurse that a patient is sweaty and neurostorming could cause a neurostorm to be left undetected or viewed as the patient being "agitated and uncomfortable." This is when the loving touch of friends and family members can help inform the nursing staff of neurostorms.

After two months went by, Alicia brought her newborn baby to the hospital to show Josh that he had a brand new nephew. Josh was confused. He was too weak to hold baby Brody by himself. As his sister placed Brody on Josh's padded abdominal incisions, Josh's frail voice asked, "Is he mine?"

His sister explained, “I had a baby, and this is your new nephew, Brody.” It was obvious that Josh was having a hard time grasping the concept of who this baby was. Josh was very content and happy believing that Brody was his, which made it all the more difficult for all of us to tell him that it wasn't his baby. Poor Josh was lost in time and space, not knowing what was clear. It was hard for me to even comprehend that just a few months before this, Josh and I had hosted a nice baby shower for his sister, and now he had no memory of it.

Communication with hospital staff about Josh's new needs was definitely a learning experience. We had to become educated about his PT, OT, and Speech and learn how to assist him when he returned home which was critical to his long-term outcome. It was also beneficial during the days to talk to the hospital caseworkers who could direct us in filling out the right information for the enormous amounts of paperwork for Worker's Compensation, Social Security and Disability along with getting the names and phone numbers of the city and state organizations and contacts that would become vital to helping Josh after he was out of the hospital. My notebook was filled with names and numbers, and I have used every one. The meetings (as stressful and emotional as they were) with family, caregivers, nursing staff, doctors, and social workers, were all extremely beneficial. It allowed each group to express their concerns from their point of view and discuss the obstacles that each faced to help establish the best care for Josh. It's good to understand that communication often requires a village working together for the patient's best outcome.

Is me again, Maria. Is 3.am This is how I spend every night, learning about everything about S'TBI checking my son. I really hope that Josh is doing progress. I think my son would be happy to talk to Josh, also sorry for double. "about"

Hi Maria. You should post a way that people can communicate with you. Post an email address or phone number. I hope things are going better for you and your family.

My daughter had a stroke in January and suffered terrible neuro storming for the first 5 weeks. Gabapentin was the drug that finally controlled them.
I agree, Gabapentin is one amazing drug.