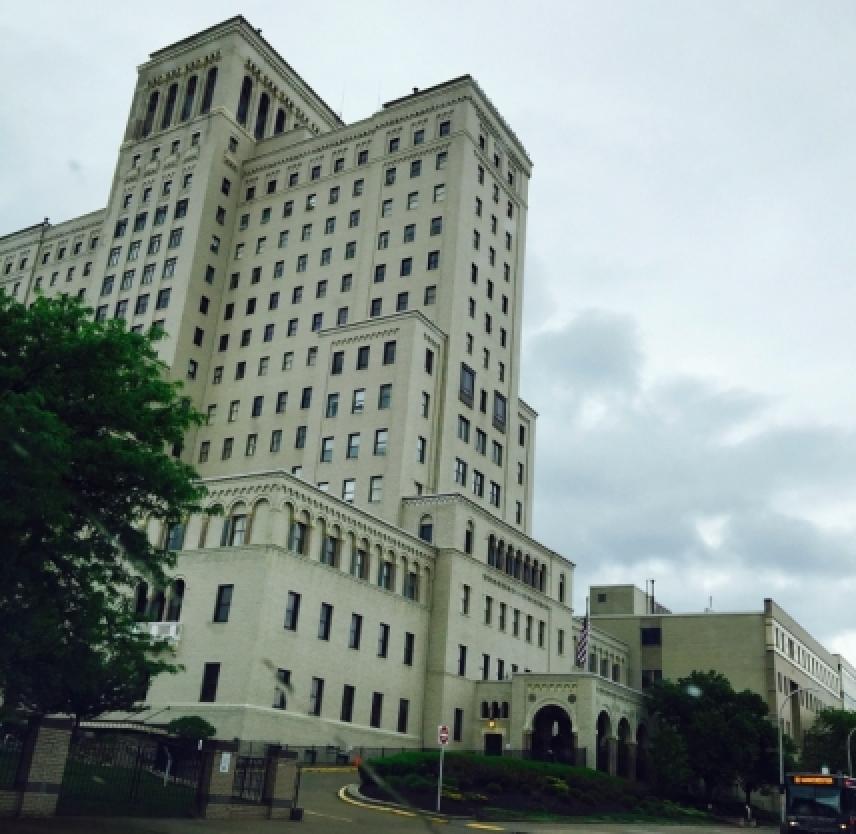 I waited for the sound of the blades to come into view. There was a thunderstorm looming. Sirens blared. The air felt heavy and hot like it was a Tuesday at the end of July, not a Tuesday in the middle of May. I pulled my car up behind a line of cars sitting at the stoplight at the corner of Cedar Avenue and North Avenue. Leaves on the trees ebbed and flowed as the blades of the helicopter churned the sky above. The light changed. I inched forward, which put me first in line for the next green light, which gave me enough time to watch the roaring beast descend. I watched the silhouettes of people scurrying around on the rooftop, readying themselves to accept whatever was coming at them. It was the third time this week I had the opportunity to watch Life Flight approach the landing pad on the rooftop of Allegheny General Hospital.

It’s a long traffic light, and I often find myself thinking about the person in the helicopter. Are they covered in blood? How far have they come? Are they small or big, a man, a woman, or a kid? Are they going to live? Who cares? I mean, who really cares about this person who is being transferred to a gurney as the blades spin slowly to a stop. Whose life is going to change today?

I cannot believe I live here I thought as I turned left onto North Avenue after the light turned green. When I turn left, the chopper gets louder, because I have to drive right past the hospital. Whereas, when I turn right, it gets quieter. But left is the way to my house. Two decades ago cars sat at this same intersection, waiting at this same light, watching helicopters land on that same rooftop. One Tuesday in July my dad was the person in the chopper, and we were the people that cared. “I cannot believe you live here.” My cousin Anne had been the first to say the words I had wanted to say out loud since my husband and I bought our standalone brick home on Sherman Avenue a year ago. “Here!” she yelled at me one day when we were driving past the hospital. “You have to drive past the hospital all the time in your neighborhood. This place would make me sick, and you and Chad up and bought a house?”
Yes, we did. We up and bought a house, and our life on the Northside has happened pretty fast—like lightening. One minute we were getting engaged, celebrating in an industrial loft in Pittsburgh’s Strip District, and the next we were married with a mortgage and Golden Retriever in the Mexican War Streets of Pittsburgh’s Northside. How I ended up in the one place on earth I’d actively avoided since the summer of my dad’s accident befuddles me. Back then, it was a sketchy place, but we had to be there because it housed the best hospital around. During the daylight hours, my aunt would take us cousins to the park where we’d write our hopes and wishes in the playground sand, and on certain evenings, the family would go to Max’s Allegheny Tavern to enjoy some real German food. Every day when my mom and I drove to the hospital to visit my dad, I’d peek down the hills of Northside and see the view of Pittsburgh, a city that felt so very far away from our hospital life where we lived sad and scared and hopeful for a whole summer. And when my dad moved to a rehabilitation center, I thought the Northside was history.

I never imagined I’d be back, never ever thought I’d live somewhere I’d have to drive by a place I hate. In actuality, the hospital is a historical landmark and is filled with exceptional doctors and nurses, and it’s not a place to hate at all. Perhaps, it’s a place I’ve yet to forgive. It’s a big beautiful place that I didn’t invite into my life back then. And I didn’t invite it a few years ago when the family was back on the neuro floor spending the last days with my grandfather. But I am back, exactly twenty years later building my own family in what has become a historic, colorful, and up-and-coming neighborhood. Chad and I take our parents to Max’s (the same Max’s) for einlauf soup, spatzels, and the best German chocolate cake. I walk Mae Belle past the playground and look down the streets and see the city. We love it here. My parents love it here. LifeFlight takes off and lands and no one thinks or says a thing about it, but me.

I can hear the helicopter pretty much from anywhere—from my bedroom window, on my porch, at the stop light, at the grocery market, when I’m walking my dog. For a while, it was my own weird fixation. I’d listen for it, and then I’d think about these movie-like moments in my dad’s life—a car crash, blood, broken bones and a broken brain, kicking and screaming, and a helicopter from Pittsburgh that came to save his life—that I can never picture as real because those scenes don’t ever make sense in our lives. All the thinking would bring up waves of anger and pain and unanswered questions—and more tears. It took a month or so to realize that my fixation was walking me backward in time, back through the mental muck that I’d spent years climbing out of.

I’d already spent too many minutes pondering what our lives would be like if we had never experienced any of it—my mom’s, my dad’s, my own—but we did. The accident will always have happened to our family, and as long as I live here in the Northside, I’ll always hear the helicopter. I’m not going to keep listening for it, but when I hear it, I’m choosing to send out some good vibes to the people involved.