The Cruel to be Kind Paradox 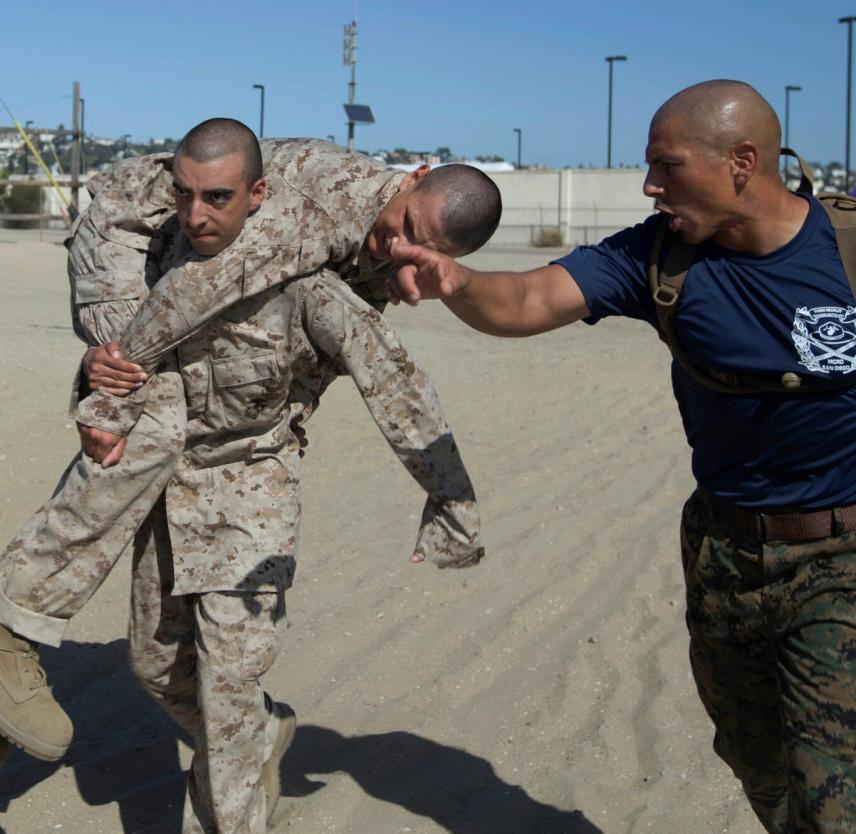 There are many things that we learn in the military; practical things, like a job skill and the importance of preparation, but also conceptual things like living according to a code of values and being part of an inter-dependent team. One thing that most service members and veterans learn, however, is to care about other people.

Sometimes, demonstrating that care and concern for others can be demonstrated in some strange ways. From the minute that a service member steps off the transport at Basic Training or Boot Camp, they are immediately surrounded by people who want to see them succeed, people who have an important job to do and are dedicated to doing that job. The way that this is demonstrated, however, is the infamous “shark attack” that is the trainee’s first encounter with their Drill Sergeant or Drill Instructor.

This pattern of being hard and aggressive as a way to demonstrate concern can also be seen when a veteran wants to protect others from themselves.

This is the Cruel to be Kind Paradox:

Service Members and Veterans can demonstrate their genuine concern for others by being aggressive or mean, either to help improve others or to protect others from the veteran’s own pain

By applying this paradox to relationships with others who may not fully understand the military mindset, this can cause disruptions in the veteran’s life by isolating them from supportive relationships.

Service Members and Veteran Can Demonstrate Genuine Concern for Others…

I had a leader in the military who often said, “if you’re going to be a bear, be a grizzly bear…don’t be a teddy bear.” Meaning, if you are going to commit to something, don’t do a half-measure job…go big or go home. In my experience, many veterans carry this mindset into their post-military life: do the job right or don’t do it all. Be either all in or all out. And this can be especially true for relationships; if we care about those around us, then we care about them strongly and deeply. We may have a funny way of showing it, but loyalty is a deeply ingrained trait for many service members. If we accept that someone is in our tribe, then they’re in it.

One of the things that can cause challenges in expressing that care and concern is the need for a measure of emotional detachment that many service members and veterans experience. Some of this is a natural consequence of joining the military; when someone joins the service, they move away from their family of origin and have totally different life experiences. Some of this is also a need to suppress or distance from emotions that may not be helpful in a military environment, and especially a combat environment. This creates an emotional barrier that some veterans are not fully aware of.

…Either to Help Improve Others…

There’s an old Johnny Cash song called “A Boy Named Sue.” The gist of the song is that a father, who knew that he wouldn’t stick around to raise his son, named him Sue in order to toughen him up. While not very effective parenting, it demonstrates one of the ways that service members learn that being hard on someone can help them improve. When someone joins the military, they’re not often aware of their capacity for effort; being put in difficult and challenging situations can help them realize that their capacity for effort is greater than what they know.

All emotions have their place, and anger is an especially effective emotion in expressing displeasure and impacting behavior. From that first encounter with the drill instructor to the epic butt-chewings that are received (or given) from leadership, aggression and anger are demonstrated to be effective in the development of soldiers. When I was a Squad Leader, my Platoon Sergeant and I had to take a soldier to see the company First Sergeant; the soldier said something that made the First Sergeant literally jump up onto his desk and start screaming at him. Again, was it the most effective leadership? No…but it certainly got the First Sergeant’s point across.

…Or to Protect Others.

Another way that the Cruel to be Kind paradox can be demonstrated, especially in post-military life, is when a veteran wants to “protect” others from the veteran themselves, and so acts in an angry or aggressive manner in order to push others away. Veterans can adopt an “offensive defense,” putting up walls with land mines and razor wire to demonstrate danger and to keep people away.

Resolving this paradox can be extremely important for healthy relationships in post-military life. As mentioned above, if someone isn’t familiar with the military lifestyle, being aggressive or mean in order to demonstrate care and concern is likely going to be misinterpreted. People won’t stick around long enough to learn that the service member or veteran cares about them; they will simply see the aggressiveness and take off. Unfortunately, if the service member or veteran is not aware of their tendency to interact with others in this way, they can interpret the person’s departure as validation of their premise; “if they were tough, they would have stuck it out.”

The same is true for when a veteran pushes others away out of personal shame or guilt. If the other person leaves because of the anger or aggressiveness, it means that they didn’t really care anyway. It proves that the method works; if no one is close to me, then they can’t hurt me and I can’t hurt them. A veteran may think, “it’s better this way,” while increasing isolation may actually be making things worse.

Understanding the need to reduce aggressive or angry behavior as a mediator for showing care and concern can be helpful in building strong, protective relationships in post-military life. Awareness that this is what we’re doing is the first step, and then developing other ways to show care and concern for others…be kind without being cruel…can give us greater satisfaction in our relationships.