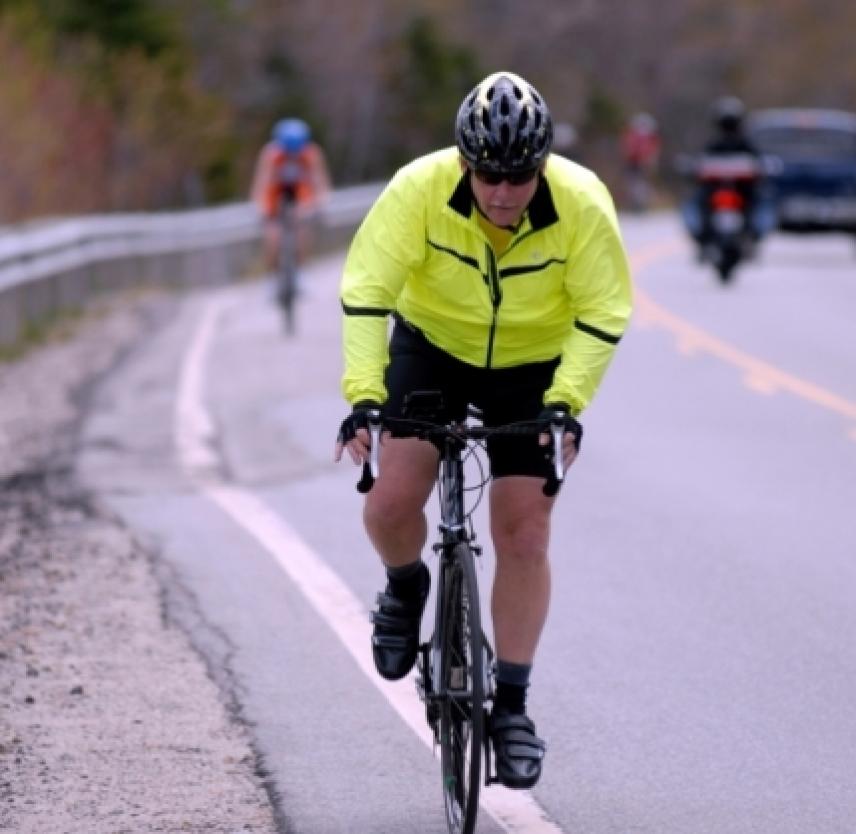 Life is so often unpredictable. Many years ago, my dad shared with me an interesting thought. "If I had the opportunity to see the future in a crystal ball, I would most likely pass on the opportunity."

I was younger and thought his comment to be pure folly. Today I see the wisdom of his words. Given the same opportunity, I can now say that I would pass on such an opportunity as well.

On November 11, 2010, the course of my life was forever altered. Not a gradual changing of life's direction … not a slowly opening door, but a breathless, terrifying, uninvited spin through a revolving door.

I was rushed by ambulance to the nearest trauma center, my wife, Sarah, following the speeding ambulance in her car. A local police officer appeared at the trauma center to take my statement in case it was my fate to succumb from my injuries.

Over the weeks that followed, the extent of my brain injury became clearer. My new normal included speech challenges including aphasia and stuttering. Memory challenges became almost comical, and PTSD with its symphony of symptoms became my constant companion. We can add to that incessant tinnitus and a good case of vertigo that robbed me of the ability to walk straight.

At the one year mark, I knew it was time to get as well as I could. Though everything I had read spoke to the fact that brain injury recovery was life-long, I harbored a secret that perhaps I was going to be different. I was going to be that one in a million who came back from a brain injury as if I had never been hurt.

As time passed, it became clear that I was in for a marathon and not a sprint. My attitude shifted. No longer was I hoping to "beat" my brain injury. Instead, my goal became to learn to "coexist" with my disability. That goal exists to this day.

My first step in this process was to learn more about exactly how I was compromised. By getting a real feel for what was in need of repair, I could better move toward a new wellness.

I was lucky to have insurance. I can’t imagine what I would have done without the freedom it gave me. When it became time to find a competent neuropsychologist, I was able to do so based on input from other members of the TBI community. I was not relegated to finding an "in network"- or insurance-approved doctor. I had the freedom to choose based on proficiency alone.

Looking back now with the benefit of a couple of years of hindsight, he was no doubt correct. I was disabled. But that was just a snapshot of how I was at that period of time in my recovery. Recovery is indeed life-long; we know that. But we also know that neural plasticity is an amazing thing.

I took my newfound information and started to formulate a recovery plan. One of my biggest decisions was to change my attitude. Never will you hear me say that I "suffered a brain injury." Never will I have the attitude that I was the "victim" of a cycling accident. Words like "suffering" and "victim" are mental and emotional barriers to moving forward in life. They restrict my forward movement.

The reality is this: if you have a heartbeat, you've had unpleasant events come to pass in your life. Children get sick, parents age, jobs are lost, and cyclists occasionally get struck. Part of the human condition is that life unfolds for all of us — sometimes in ways we plan, other times in ways we could never have imagined. I am not exempt, nor are you. The bigger question was what was I going to do to make the most of the rest of my life.

My mind was quickly made up. Though I might never get back to 100 percent, I became driven to get back as close to that as possible.

Like snowflakes, every brain injury is different. There is no "one size fits all" treatment protocol. Rather than looking at my brain injury as a single challenge, I opted to look at my injury as a series of individual symptoms. In essence, I broke it down to a much simpler form.

I was not just someone who had sustained a brain injury. I was a person who was trying to find an effective way to live with tinnitus, to live with a memory that so often failed me, to relearn to speak with a speech impediment. While learning to live under the enormous weight of a brain injury may seem overwhelming, learning to find compensatory skills for individual challenges was much easier.

I made the decision to take smaller bites out of the apple. And it's been a game-changer. In fact, there are times there is almost an element of fun to it all. That is a far cry from where I was a few months out, thinking that life as I knew it was over.

In my book, Metamorphosis, Surviving Brain Injury, I chronicle the trial and error in developing new compensatory strategies. For example, my initial solution to my memory challenges was to use those ever pervasive yellow sticky notes. Not the paper ones, but — being a bit of a tech guy who happens to have pathetic handwriting — the ones you can litter upon your computer screen.

But sticky notes — paper or online — are only good if you read them. One day, a full month after I decided to use the sticky note methodology, something on my PC screen caught my eye. Looking closely, I realized that I had not even looked at my notes for weeks. Sitting right in front of me were scheduled tasks, all uncompleted, gathering digital dust. So much for digital sticky notes!

As memory problems remain challenging, I needed to find a new method for moving as much of my memory outside of my brain as possible. Once I figured out that I sync my cell phone to my Google calendar, I found my solution. Soon, it was second nature for me to add appointments and events to my calendar. Unlike the sticky notes I put on my PC — which became as unnoticeable as old wallpaper — every time I turn on my phone, my reminders are in my hand and are now rarely forgotten.

Symptom by symptom, I found solutions that worked for me. My solutions didn’t make my  deficiencies disappear, rather they became compensatory strategies that allowed me to coexist with my shortcomings.

While many of these strategies are unseen by most, there are a couple of cases where others benefit from my new strategic approach to life.

Virtually every day since November 11, tinnitus robbed me of any real silence, any peace. To deal with this, I developed a compensatory strategy that I fondly call “Ear Conditioning.” Think about the hot summer during which we try to stay cool with air conditioning. Moving from one cool oasis to another, we find respite for discomfort. Akin to this, I made various rooms in the house have “ear conditioning” like our bedroom with a white-noise machine on my dresser. Now, the soft chirp of summer crickets at night blot out the constant drone of my tinnitus.

As for PTSD, my wife and I found that our world became smaller because we spent more and more time at home. But we have tried to make the most of it. Since my crash, new grape trellises adorn our landscape, flowers of all varieties blanket our yard, and a new love called “aquascapes” has allowed me to bring “ear conditioning” to our yard. By our back patio sits a fishpond with a waterfall, the soft gurgle of our backyard stream a welcome distraction. I installed that one the first year after my brain injury. I've come to find that water gardens and their accompanying relief are like potato chips, you can’t have just one.

Year two found me adding a small reflecting pool, spitting frog and all. Yes, a bit more auditory bliss from that one. And just this past summer, I got “the itch” again and added a nice fountain to our back deck. You no doubt see where I am going with this.

People who don’t know I have a brain injury might simply admire our garden with its myriad waterscapes. But for me, these serve as a coping strategy that helps me live a meaningful life.

In the three years since my crash, life has slowly taken on new form. Acceptance replaces fear. Sustainable compensatory strategies build confidence. And life, though vastly different than life before my brain injury, becomes again worthwhile.

So much of my life these days involves advocating for those whose life has been impacted by a brain injury. While nothing can take away the challenges that come with trying to rebuild a life after brain injury, knowing that others have been helped by the experiences I've had makes this new life a life of real and meaningful purpose. And for that, I am grateful.

Thank you so much for sharing your story.
I too took the decision that negative words like survivor, why me and I had to forget the man who plowed into me with his car a knocked me off as I found the more I hated him the more the poison dripped. I had to ignore my wife when she repeatedly told me I was not able. But the worst was you have to look forward, until compensation is paid I find it hard to as the uncertainty of our future is unsure. I lost my job and big salary but I must admit it easier without the stress of 27 engineers and their needs. My 4 yr old daughter knows if she finds my glasses they are to go in the basket at the front door along with wallet, watch etc. phone is a god send for appointments and reminders, I also use the notes on the phone to record what I have done if I remember that day
This is great! As a writer with a TBI, I COMPLETELY relate!
I had brain surgery a year ago, so technically I don't have a TBI, but the after effects are similar. Your story is inspirational, and I thank you for sharing it.
I try to read these stories , i have very hard time following, plus eplisey on top of that. just wondering if they could ever makes these stories audible? Thank you for your story.

I am a 29 year survivor & can relate mostly to the statement:

Symptom by symptom, I found solutions that worked for me. My solutions didn’t make my  deficiencies disappear, rather they became compensatory strategies that allowed me to coexist with my shortcomings. As I have rebuilt my life using similar strategies

Great story of triumph over tragedy. My son also has a TBI and has learned to adjust to his new normal and not focus on the "why me?" question. So very true how elastic the brain is and that healing continues always.

Thank you for such a great article about brain injury i can really relate. Your words give hope and inspiration.