Will I Develop Chronic Traumatic Encephalopathy from Playing Pro Football?

Retired NFL player Thomas Jones wonders if he will develop CTE from cumulative concussions sustained playing football, but there is nothing to do about it but exercise your brain, learn what you can, and share your life with your loved ones.

[Thomas Jones] I have been to neurologists to have my brain checked and there's really not much that they can tell you to be honest. You know, I mean, the thing about CTE is you won't know until after you pass. They have done a couple of studies where they can kind of, I guess, show potential for CTE based on the type of proteins that show up in your brain, based on the study. But you won't truly know until you pass. And that's the scary thing. There's a lot of people who don't play football that have mental issues: dementia, Alzheimer's, bipolar disorder, schizophrenia. There are so many different mental illnesses, and I majored in Psychology. The only difference is with me and other football players is I don't know if I would get that because I am human like everyone else or because I induced it based on the concussions. I might forget something, which happens a lot, and I notice that, or I will talk to someone, and I might forget the actual topic instead of just what I was about to say, and it's very, very frustrating. I know a lot of people do that but am I doing it because I am like them or because I played football. Because they can't say they had concussions, that's why. They're doing it because they're a normal human being that just forgot what they were going to say. That's I guess the most unnerving thing about it is that I actually have the option for the concussions to be a reason why I don't remember stuff. Then from that point you don't know how soon it will get worse or if it will get better. Stay active, read as much as you can, educate yourself as much as you can on concussions and CTE, and acknowledge whatever is going on. Don't push it to the side and say, "I'm okay," if you don't feel okay. You know, seek as much help as you possibly can because anything helps. Confide in your family, your friend, or— because—you know—you can't go through this by yourself. And that's what I think a lot of these other guys did— they went through it by themselves and then they had to end up handling it by themselves.
Posted on BrainLine August 19, 2013. 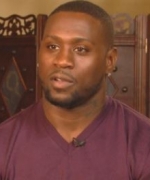