The Research on Blood Biomarkers for Brain Injury

Col. Dallas C. Hack, MD
Related Content:
How Does the Military Define and Identify a Concussion?
Post-Deployment Syndrome Versus Multiple Syndromes
Healing After a Military TBI: A Doctor/Patient Perspective
Post-Deployment Syndrome: The Illness of War
Re-establishing Normalcy
The Invisible Injuries of War: Impact on Military Families and Children
Dr. Aditya Bhagwat: Impact of TBI in the Military
Once a Warrior, Always a Warrior
Invisible Heroes
The Invisible Wounds of War
Positive Impact of New TBI Procedures in the Military
Stem Cell Research and Brain Injury
Careful, Thoughtful Stem Cell "Revival" Needed in TBI Research
The Practical Applications of Stem Cell Therapy After TBI
The Potential Impact of Current Brain Injury Research
Binding the 'Invisible Wounds'
Diagnosing TBI in the ER
Diagnosing and Treating TBI: Challenges in and Beyond Theater

Blood biomarkers could enormously change the way TBI — from severe to mild — is diagnosed and then treated. Research continues to reveal more.

We have been working on brain injury for decades, actually, [brainlinemilitary] at a relatively low level. [A service of brainline.org] But 10 years ago--coincidentally, the morning of 9/11-- our researchers got together with some civilian researchers at one of our scientific meetings, and decided to embark on a program to challenge the common thought, at that time, that this would be impossible to do-- that these biomarkers would not get into the blood. And so, we had an escalating program from 2001, on. By the time 2010 came, we actually had patient data from what we call early trials, and then second trials--Phase 2 trials-- that showed that we could not only tell that a patient had severe brain injury, but we also could tell, in limited numbers of patients, that the mild TBI patient also showed those same biomarkers. So initially people thought that only a severe brain injury would disrupt things enough that it would get into the blood. We kept pushing that envelope, reducing and improving the sensitivity of our tests to smaller and smaller amounts, and found that not only is it sensitive enough to tell whether there's an injury to the brain, but it's specific--in other words, it's there only if there's a brain injury. We need both. You need to have it sensitive, and you have to have it specific to know that you've actually got that versus something else. So that information, really, was becoming evident from our limited studies, by 2010. We felt that we had enough information that we could move forward into the large clinical trial that it takes to get this approved by the Food and Drug Administration. So that major trial on this first available test just started enrolling patients this month and we should be complete with collecting that patient information and those blood samples by the end of 2012. It's important to develop these objective tests and blood biomarkers-- or one of those objective tests--to first of all, tell us Does that person have a brain injury or do they have some other kind of thing, like a stress disorder or something like that that can have similar symptoms? Because we believe the treatment will be somewhat different. If it's a brain injury, you're treating damaged cells. If you have some kind of a stress reaction, you're dealing pathways that are interrupted and not functioning properly-- two different processes going on there. So we need to know, for sure, do they have a brain injury or not. But it's more than that. As I said--right now, our only treatment for brain injury is rest, basically. We hope that your brain and your normal healing process can recover and you can achieve normal function after that. That doesn't always happen, No. 1; and No. 2, we believe that--just like with other diseases-- that there are things that we could do to promote that healing process. So we're working on a number of different drugs-- some of them currently in use for other reasons or new drugs that we're trying to develop that help the healing process in the brain. But how do you know if those are working or not? Having these biomarkers that tell us, not only in the first few hours, did you have a brain injury but how is your recovery going weeks later and even years later. It will tell us whether that treatment is actually working or not. There's so much human effort component to all of this that we need to know are we fixing the root problem, and then we can work on fixing the function.
Posted on BrainLine December 14, 2011. 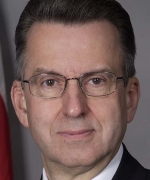