Recognizing a Child's Early TBI Later in the Classroom

Ann Glang, PhD
Related Content:
How Does TBI Differ for Those Injured as Children?
Children with Traumatic Brain Injury: A Parents' Guide
Heads Up to Schools: Know Your ABCs — for Teachers, Counselors, and School Professionals
Targeting Teachers in Treating Brain Injury in Children
Don't Give Up: Advocate for Your Child with Traumatic Brain Injury
General Information for Parents and Educators on TBI
Recurrent Issues for Parents of Students with TBI
Learn How to Be a Proactive Advocate for Your Child

Children who sustain a TBI early in childhood often grow into their injury; their problems sometimes don't surface until they are in elementary school.

[Dr. Ann Glang] This biggest challenge with children as they age is that often they grow into their injury. So we might have a child who's injured at 18 months in a car crash, and they come back, they are treated medically, they go back home, and they seem to be developing fine, and everyone thinks nothing of the injury. And in fact, oftentimes don't even remember the injury and don't communicate the information about the injury to professionals who are then in the position to serve the child. So the child gets to 1st grade—kindergarten, 1st grade, 2nd grade. They do fine, because in those situations, we talk about the teachers serving as the frontal lobe. So the teacher is saying, "Johnny, pick up your pencil. Johnny, write the letter 1. Johnny, put your pencil down now. Johnny, take your pencil and put it in your desk." So one-step commands. Very simple to follow. But when you start getting into 3rd grade, 4th grade, 5th grade, and you're asked, "Okay, Johnny. I want you to write a book report about one of the books on the board here. Pick a story and then write a summary of that, and tell us what you think about that story." Well that's a very complex set of tasks and involves sequencing, involves lots of abstract thinking and planning and organizing. And that's just where a lot of kids with a brain injury will fall apart. So maybe Johnny starts having trouble. Nobody remembers that at 18 months he had an injury. Nobody connects those dots, and that happens an awful lot. We see it also in moving from a child whose had an injury as an elementary school-age child, and then as they get into adolescence, we attribute a lot of the problems they are having socially, cognitively, behaviorally to adolescence. They are lazy. They are not motivated. They come from a bad family. No one remembers the injury. And that's really kind of the story in childhood brain injuries. We don't remember the injuries, and it's not on the radar screen of a lot of schools, so that some of those behaviors that might alert you or I, don't alert the teacher who has 35 kids in her class and is trying to you know, trying to figure out why Johnny's misbehaving.
Posted on BrainLine July 29, 2010.

Ann Glang, PhD is a research professor and co-director of the Center on Brain Injury Research and Training (CBIRT), a center under the office of Research, Innovation and Graduate Education (RIGE) at the University of Oregon. 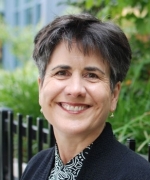