Positive Ways to Reinvent Yourself After a TBI

Taryn Stejskalm PhD, LMFT
Related Content:
Why Me? Why My Family Member?
The Many Layers of Post-Traumatic Growth
The Process of Dealing with Loss and Grief After a Brain Injury

Life is not always "candy and ponies," but for people with a TBI who have lost something that was integral to their identity, sometimes finding the spirit of that trait can open new doors.

So if somebody did something before in their life before the injury and are not able to do that, how do we put a positive spin on that? Sometimes I think it's respectful not to put a positive spin on it, right? Life isn't all candy and ponies, as one of my clients says, and sometimes, by just not being that eternal optimist and being able to sit with people and say, "You know what? This is really hard that you had something that you loved so much that you lost." I think people can appreciate that sometimes more than an upbeat, you know, maybe sort of Pollyanna or overly positive attitude. At the same time, you know, we don't want to stay in that place of grief and loss forever and so when someone has lost something that's very integral to their person or to their identity, I try to figure what it is about that thing that they loved so much, right? Sort of the spirit behind that endeavor, right? And so an example of this is a gentleman who I worked with who very much wanted to go to law school. He always wanted to be an attorney and the summer before he was going to go to law school-- he'd already been accepted, he was in a very bad car accident and it just wasn't going to be possible for him to kind of have the academic where with all to pursuit a legal education, and so we sat down and we said, "Well, what did you like about the idea of being an attorney? And he said, "Well, I always imagined myself standing up for people who didn't have a voice; you know, and just taking care of the little guy." Right? And so then we started to talk about; okay, well what could you do now that still provides that same sort of spirit, right? Even if it's not as an attorney. So he became a court-appointed advocate for children and you know, he would-- he used to call me on his way to work just to check in and say, "Yeah, I'm going to the court room, and I'm going to testify. I hope you're having a great day, Taryn!" And so he got to have that spirit. He didn't become an attorney, but he did get to carry out, you know, the spirit of his desire in life.
Posted on BrainLine January 8, 2013.

Taryn Stejskal, PhD is a licensed marriage and family therapist and the founder and president of Wellness Strategies, P.C.; a private practice specifically developed to meet the unique needs of individuals, couples, and families after one person has sustained a neurological injury. 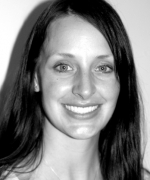