Lessons Learned as Parents of a Son with TBI

Bob Duncan whose son sustained a concussion while being a cheerleader for his college talks about what he would have done differently had he known more.

[Bob Duncan] If I knew then what I know now about concussions, I'd of had a total different reaction. First of all, I'd of taken him to the local children's hospital or the academic medical facility to be tested right away. Second, instead of waiting that 6-week time period to get something set up with a specialist, I would've asked for that the very next day even after his care within the emergency department because what we learned is Jonathan had one of those worst case scenarios of a concussion and then going straight into exams and not giving your brain a chance to heal and rest, and it just perpetuated itself and continued to get worse because he was stressing his brain trying to study. I would've worked quickly with the University to say, "This is what's going on, let's put a plan of action in place and what to do. So there are a lot of lessons learned on our parts as parents that we could have done things a whole lot different and would've taken it a whole lot serious. Jonathan grew up in an athletic family. I played football in middle school and then played basketball and tennis in high school and had my fair share of knocks and hitting my head. And looking at Jonathan—Jonathan is soccer, football, and basketball. And as we've reflected back going through this process Jonathan shared with us 3 other different times, both in middle school and high school where he had concussions that went untreated and undiagnosed. But he could tell you what happened and a couple times, getting up and running towards the other team's huddle because he didn't have a clue where he was. And so those were things that we were unaware of at the time. And then you fast forward to college, and I remember the first week Jonathan called and said, "Dad, I was asked to try out for cheerleading. What do you think?" And I said, "Jonathan, I personally think it's great." I said, "There's a lot of stigmatism around that." And I said, "But I had a chance to serve as a mascot in college. There's a lot of fun in making that connection. And you'll get the workout of your life. It's a great way to stay physically active and cheer without getting hurt." You know—you just don't think of a cheerleader getting hurt. And—particularly a concussion, but that's not the case. It can happen like that [snapping fingers] and truly, truly impact a life in a negative aspect. So if I was speaking to a room full of parents about concussions the first thing I would say is, "Please, please anytime a child suffers any type of head injury, no matter how simple you think it is. Whether it's a hard hit from a soccer ball or a fall on the floor, please seek attention fast. Once attention is sought, monitor and watch your child, look for the signs, continue to talk to that child to find out how they're feeling, if things are different." Jonathan knew. He could tell things weren't right. He just wanted to fight through because that's what we want to do. And make sure you're seeking the proper attention and follow orders because your brain is a very delicate, delicate part of your body. It controls and runs everything, and the slightest bit of hit— trauma to it can change someone's life quickly. And so it's something you have to take very serious. And I have to admit, we didn't. And now, looking back, I wish we had of.
Posted on BrainLine February 21, 2014.

Healthcare Executive Bob Duncan and his wife, Sarah, have three children. Their son Jonathan was a sophomore nursing student and a cheerleader at Marquette University when he sustained a concussion that led to an academic leave of absence and ended his cheerleading career. 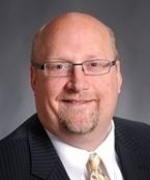