Connor Martin: Not Clicking Socially After Deployment, Turned to Rugby

Connor’s brother Kevin Ash played rugby to help build the comradery he was missing from military service. He did not realize the injuries from playing contact sports combined with the blast injuries he sustained overseas would lead to a fatal TBI. His family would learn posthumously that Kevin had severe chronic traumatic encephalopathy (CTE).

Veterans can sign up to donate their brains for CTE research with BrainLine partner Project Enlist (https://projectenlist.org/)

Learn more about some of the treatments available for those recovering from brain injury and PTSD using our Treatment Hub.

He was, he was just very distant at that time to be honest. And you know he, it’s not like he wasn’t looking for help, he would ask, he would ask people to hang out or he would just I don’t know whatever reason his personality wasn’t there and he wasn’t clicking socially and it just kind of perpetuated the cycle. He was struggling to find friends, he was working, he was working or second or third shift so working nights and didn’t quite have that social life so he got into rugby. It’s been around our family since I’ve grown up so I think that was just kind of an outlet for him to get some physical activity as well as getting some you know comradery that he was missing after life in the military. I love it just because it’s I don’t know, it’s contact, I like contact. I play hockey and football and it’s fun, it’s a big team game. It’s eleven guys or 15 or seven, there’s different variations but it’s a lot of teamwork and you really can’t do it one guy, on your own, it’s a lot of, a lot of passing, a lot of cohesion to make it work. I know Kevin, Kevin loved it because he got to be around a group of guys that were passionate about a sport just like he was and he loved, I know he was a physical guy, he loved that physical contact as well, he grew up playing football. But I think it, I think he really just liked the friendships that he got from that group of people. We played a couple of tournaments together and then we played one blizzard game actually, there was a bunch of snow on the ground and I broke my nose in that game. But we got to play a few games together in that time because I was starting to get old enough, I was you know 17, 18 at that time so they were starting to let me play with the adults and I don’t know it was just a blast. My dad, who is his step dad or former step dad, the three of us all got to play on one team together which was a pretty special moment. My dad talks about it as kind of one of his dreams he had because he, he played rugby for the longest time and got us both into it. So I know it was really special for him and he looks back on that as a very fond memory and I know Kevin did too because I know the guy who got him into rugby is a father, or his step father or former stepfather and then his little brother on the team. It was all very special for the three of us. We all had very different talents. Kevin was definitely the most dedicated and most persistent and perseverant with athletics, he was the one who was always in the weight room, he was the one who was always doing the extra work. I probably got a little bit more of the talent, but he was definitely that blue collar, nose to the grindstone military type work ethic that got him everywhere he needed to go and wanted to go in terms of athletics. This video was produced by BrainLine thanks to generous support from the Infinite Hero Foundation.

This video was produced by BrainLine thanks to generous support from the Infinite Hero Foundation.

Connor Martin is the brother of Kevin Ash, a veteran and athelete who suffered from Chronic Traumatic Encephalopathy (CTE). 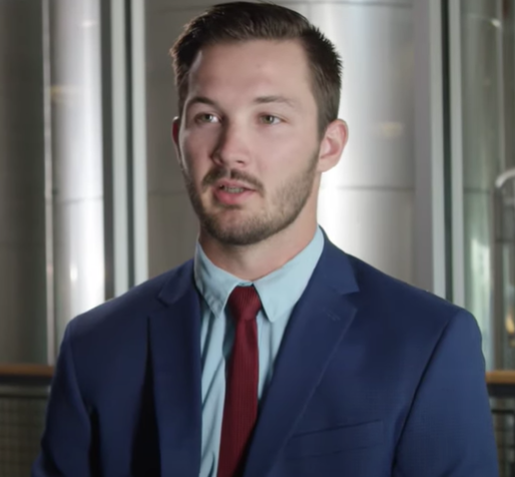