The Worst Head Injury I Ever Saw (in someone who was still alive): Part 1 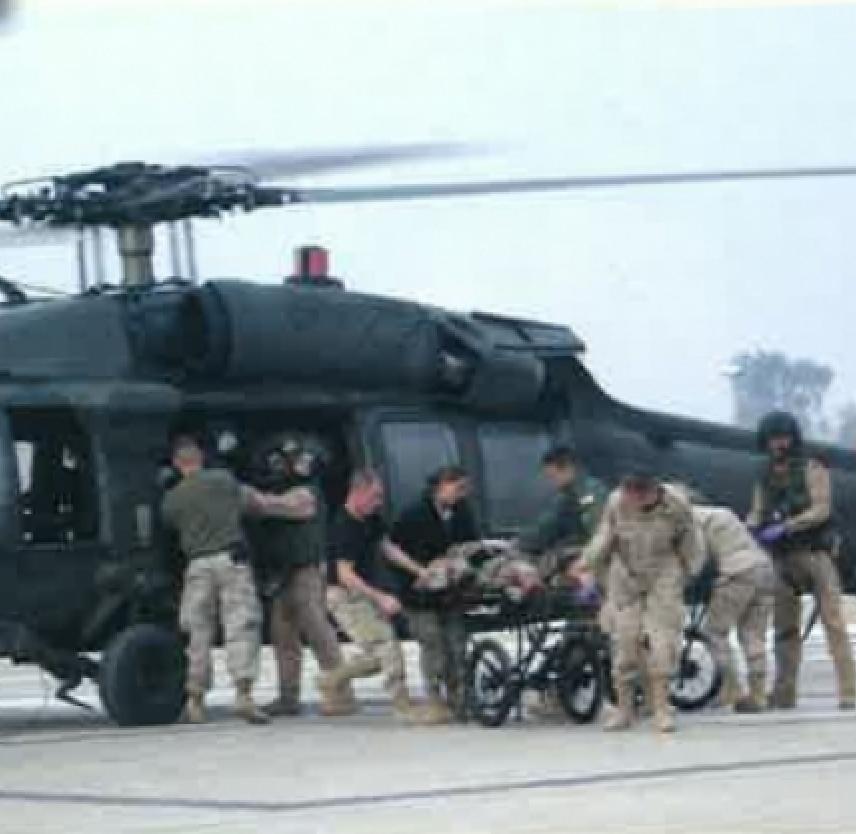 "The Worst Head Injury I Ever Saw" is excerpted from Dr. W. Lee Warren's, No Place to Hide: A Brain Surgeon's Long Journey Home from the Iraq War. Warren’s story is an example of how a person can go from a place of total loss to one of strength, courage, and victory.

Everyone in the hospital seemed stunned after several days of working nonstop. We had become robotic and lifeless, waiting for the next wave of inevitable horror.

Just as we entered the ER, the radio operator called, “Sirs, we just got a call from an incoming Black Hawk. They’re about five minutes out, and they say they’ve got an American with a severe head injury.”

I stepped up to the bed and saw the soldier’s DCU blouse before the medics cut it off. His name tag said “Statzer.” He was an Army staff sergeant.

I unwrapped his head, revealing the worst head injury I’d ever seen in someone who was still alive. The left side of his face and forehead were gone. His brain swelled out of a fist-sized hole in his skull. Part of his jaw was missing, and his mouth was full of blood. It was a miracle that the helicopter medics had been able to get a breathing tube in him.

He was bleeding from his scalp and his face and had a huge laceration in his neck that gushed the dark, non-pulsatile blood that meant his jugular vein was torn. His scalp was so swollen that he had serum oozing out, and he had several burns across his chest and neck.

“Let’s get him to CT,” I said, “and somebody go get vascular surgery and ENT. Tell them to meet me in the OR. And get Tim. I’m going to need his help.”

Statzer’s scan showed that there were several large pieces of shrapnel deep in his brain, along with a lot of blood, air, and fragments of bone. I shook my head and wondered what I would have to do to help this young man. Whatever it was, I had to do it right now, or he would be dead in minutes. I heard over the speakers: “Attention in the hospital. We need blood immediately. There is a whole blood drive in the lab now.”

We put Statzer on the surgical table in the OR. I shaved what was left of the hair on his head while the anesthesiologist hung the first of many bags of blood the sergeant would need to survive.

“Knife,” I said to Nate. I held the scalpel over Statzer’s head and said a silent prayer that he would survive — and that I could figure out what to do.

Just as I was starting the incision, Tim backed into the room, his arms dripping the yellow iodine soap we scrubbed with before surgery. “I saw the scan,” he said. “Can’t understand why he’s still alive.”

Tim and I clipped and cauterized and tied off dozens of arteries and veins that were torn and bleeding. Vascular surgeon Todd explored Statzer’s neck to gain control of the jugular vein. Little by little, as we stopped the bleeding and replaced his blood with new units donated by hospital personnel, Statzer’s pressure and vital signs began to improve. Now that he was stabilized, we could start trying to put him back together again.

His skull was shattered so badly that I barely had to use the drill. I removed almost all of the remaining left side of the bone and found that the covering over his brain had been shredded by the many objects driven through it by the bomb blast. As I expected, his left frontal lobe was mostly gone, but the brain he had left began to swell dramatically with his rising blood pressure. Red, bleeding brain rushed out of Statzer’s head, and I again heard my old professor Dr. Baghai’s voice urging me to maintain control.

“Nate, give me a ventricular catheter,” I said. If I could place a catheter into the ventricle of Statzer’s brain, the release of spinal fluid would stop the brain from swelling out. The CT scan had shown me that the ventricles had shifted from their normal position, and placing a catheter deep in the brain when the anatomy is so altered by swelling is extremely difficult. But if I failed, Statzer would die.

“Here we go,” I said. I chose a trajectory and slid the catheter into Statzer’s brain. Normally we use a depth of seven centimeters as the maximum safe depth for the drain, because deeper than that and you risk injuring the brainstem. But because of the brain shift, Statzer’s ventricles were a lot farther away, and when the catheter reached seven centimeters, there was no fluid coming out yet.

I pushed it to eight centimeters — still no fluid. The brain was getting more and more tense. I was sweating because I knew that if I couldn’t get the catheter in and relieve the pressure, he was done for. But if the catheter went into his brainstem, I’d kill him on the table.

“Your trajectory is good, Lee. Go a little farther,” Tim said. I pushed the catheter a centimeter deeper. I felt the pop, and spinal fluid gushed above my head, under so much pressure that it hit the ceiling and dripped back down onto my neck. Statzer’s brain relaxed and settled back into his skull.

I removed the rest of his frontal lobe, finding a walnutsized metal fragment and Statzer’s left eyeball buried in the white matter. Several of his major cerebral arteries were torn and actively bleeding, and I was afraid that once I got them stopped, he’d lost so much blood supply that he would have a stroke. I doubted that he would ever use his right arm and leg again, even if he survived and woke up someday.

Tim placed Statzer’s skull fragments into his abdomen, and Joe from ENT performed a tracheostomy while Todd finished repairing the torn veins and arteries in Statzer’s neck. I sewed up the hole in the skin where Statzer’s eye used to be, and by the time we were done he had several hundred stitches.

Somehow that drain stayed open, and in the ICU after surgery, Statzer’s brain pressure was normal. If he could avoid infection, I thought, he just might survive. Recovering would be an entirely different story.

In the surgeons’ lounge, I prepared to call Statzer’s family. We didn’t do death notifications from Iraq, but we did call families when a soldier had been injured badly enough to send them home. We wanted to let the families know their soldier was alive and on the way to Germany and then America, so that they could make travel plans to be there when the soldiers reached Walter Reed.

The operator connected me to the number on Sergeant Statzer’s Red Cross form. After a few rings, I heard a man’s voice. “Jim Statzer,” he said.

“Mr. Statzer, my name is Dr. Lee Warren and I’m a neurosurgeon at the 332nd Air Force Theater Hospital in Balad, Iraq. Your son Paul has been critically injured in battle, but he’s alive.” I went on to tell him that Paul’s injuries were very severe, and that, although he had come through his surgery and was stable, I was unsure if he would survive the trip back to America.

From thousands of miles away, I heard Mr. Statzer suck in a breath, and when he spoke next, his voice shook. “You said he’s alive, right, Doctor?”

I heard Mr. Statzer repeating what I’d said to his wife. Then he cleared his throat and said, “Then you send him home. Doctor, by the grace of God, I know my son is going to be okay.”

I hung up and walked back to the ICU to check on Statzer. His dad’s words hung in my mind, and I thought, For Paul Statzer to be okay is going to take a miracle. A whole series of them.

To my great surprise, in the ICU a critical-care transport team was preparing Statzer for his flight to Germany. Normally, we first had to contact the team to let them know we had a patient, and then it would take a day or two before they were able to move that patient. This team had a C – 17 ready to leave, and they just came by the hospital to check to see if we happened to have any patients who needed to go.

I watched Paul Statzer roll out of the ICU with a brain pressure of zero, leaving Iraq less than four hours after his surgery. He’d survived an IED blast to the face from three feet away, a combat helicopter ride, and three hours of surgery by four surgeons, and his veins were full of other people’s blood. The most injured man I’d ever seen alive had a normal blood pressure, heart rate, and body temperature when he left our tent hospital. I thought, There have been a few miracles already.

Read The Worst Head Injury I Ever Saw, Part 2 >