The Soldier, the Terrorist, and the Blood Drive 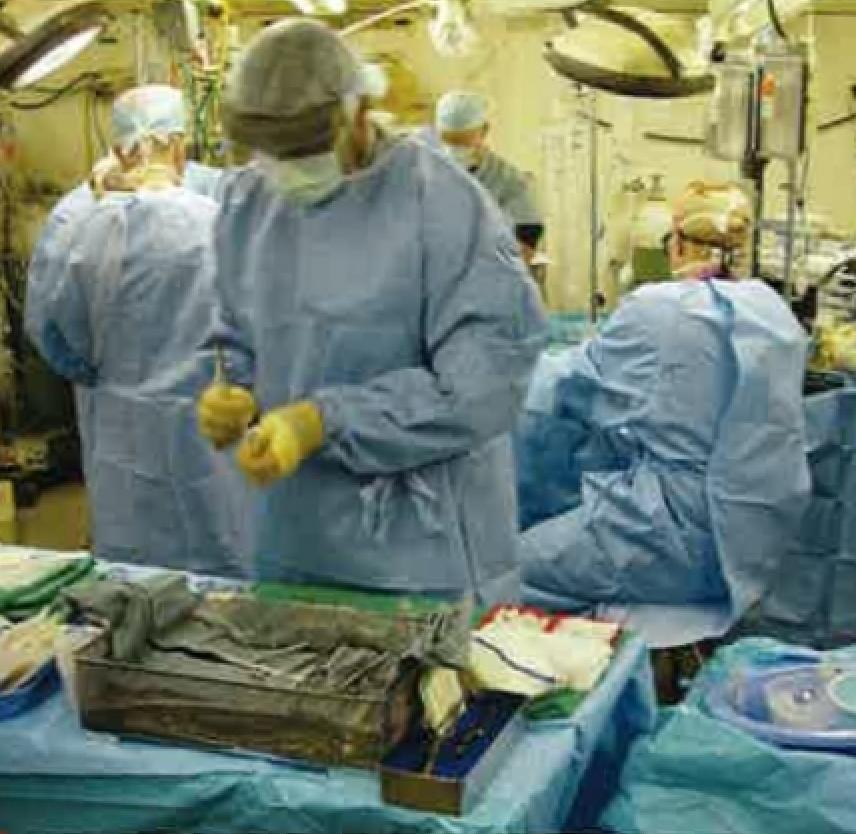 "The Soldier, the Terrorist, and the Blood Drive" is excerpted from Dr. W. Lee Warren's, No Place to Hide: A Brain Surgeon's Long Journey Home from the Iraq War. Warren’s story is an example of how a person can go from a place of total loss to one of strength, courage, and victory.

I walked to her, and she pointed to two beds next to each other. An American and a brown-skinned man with 2280 written on his chest. A Marine lance corporal stood next to the American’s bed, his hands on the stricken man’s chest, his eyes closed, his mouth moving silently in what I presumed was prayer. The nurse touched his shoulder gently. “Corporal, you need to go to the waiting room now. Let the doctors do their work.”

The young man looked up at her, his green eyes showing an amalgam of rage and fear. “Yes, ma’am,” he said. “Please save Louis. He’s my best friend.”

“We’ll do everything we can,” she said, tears welling in her eyes.

The corporal stepped toward the surgeons’ lounge, then turned and pointed at 2280. “This guy shot Louis when we crawled out of the Humvee,” he said. He looked down for a moment before he continued, “Then I shot him.”

As the corporal walked away, I looked down at Louis, a strong, tall young private of maybe twenty. He had a bandage on his forehead, and when I removed it I saw a perfectly round bullet hole in the middle of his forehead. There was no exit wound. His pupils were dilated and did not react. His chances were not good.

While the medics rolled Louis to the scanner, I turned to 2280’s bed. He also had blown pupils, no exit wound, and a hole in his forehead. The corporal was a good shot.

Ten minutes later, I was faced with the most difficult decision — personal or professional — I’d ever had to make.

Tim was still tied up with his surgery, and it would be about three hours before we would have another set of instruments available. Neither of these two patients would survive long enough for McDonald’s people to sterilize more instruments. And both Louis’s and 2280’s scans showed injuries that could be survived with immediate surgery, but that would be fatal if I didn’t hurry.

I am trained to make medical decisions, not political ones. These two patients were about the same age, had similar injuries, and the medical issues surrounding my decision as to which of them should be operated on first were decidedly undecidable. There was no medical answer to this problem, and no military training we’d received prepared me for it. Triage was usually more straightforward, and the Americans naturally received priority in non-life-threatening situations, but this was literally a case where 2280 was going to die a preventable death if I said so.

“Lee, come on — room four is open. But we’ve got more casualties coming in. What do you want to do?” The Czar wasn’t interested in my private thoughts.

“Both beds in room four are open?” I asked.

“Then get me one of the general surgeons, and take both of these guys to the OR.”

Five minutes later, I was shaving the Marine Louis’s head, and Chris was doing the same to the terrorist. I still didn’t know exactly what I was going to do, but I wasn’t willing to let 2280 die just because he wasn’t an American.

We prepped both men’s scalps with iodine solution and draped them for surgery. Nate opened the last craniotomy pack on his table, and a nurse connected our last sterile drill to the foot pedal so I could control it.

“Knife,” I said, then felt the pop of the steel scalpel when Nate slapped it into my hand. I held the blade over Louis’s head and said a silent prayer, as I always do just before I start an operation.

“Finished my case, I’m here to help,” Tim said with his head stuck through the door. “I’m scrubbing in.”

That solved the problem of two patients for one brain surgeon, I thought, but we still had only one set of instruments.

“Tim, we’ve got one drill, and the others won’t be ready in time to save either of these guys.”

“No problem,” he said. “Let’s just change drill bits between you drilling your patient and me drilling mine. At least the bit will be sterile.”

“Sorry, Colonel,” Nate said, “but this is the last bit in the hospital. We were supposed to get more on the resupply flight today.”

There was an uneasy pause. “Okay, guys, here’s what we’re going to do,” I said, though I could hardly believe that I was about to propose such a preposterous plan. “I’m going to start my case, and after I’ve used the drill I’m going to hand it to the nurse. She’s going to run sterile saline on it to clean it, rub it down with alcohol, and hand it to Tim. Every time I finish with an instrument, that’s what we’ll do.”

Tim shook his head slowly, his eyes scanning the OR as he tried to think of a better plan. Nate and the others were silent, as if they couldn’t believe what we were contemplating. In America, sharing instruments between patients would be considered malpractice. That day in Iraq, it was the only choice I could see.

Tim nodded. “Make it so. Scalpel.”

We both made the skin incisions and exposed our patients’ skulls, as we’d done so many times before. I used the drill to remove Louis’s skull flap, and when I was finished I handed the bloody tool to the nurse. My eyes met Tim’s when he took it from her after she’d cleaned it as well as possible.

And so it went. Four or five times during my case, when I was sure I wouldn’t need a certain instrument again, I handed it to the nurse to clean for Tim — who improvised during his case until he had what he needed. I passed off the Penfields and the Kerrisons and the Langenbecks and the other tools of our trade, and Tim’s operation got easier with each addition to his arsenal.

Louis’s brain relaxed nicely after I removed the clot, and by the time I closed his scalp, the ICP monitor read 0. He had a decent chance of surviving, although his brain injury was severe. He would most likely reach Walter Reed alive, and his family would get to see him again. That’s something, I thought.

Tim’s patient, 2280, was having more trouble. The corporal’s bullet had torn several arteries, and although Tim handled the bleeding and brain swelling expertly, 2280 lost a lot of blood. And like everything else in the hospital that day, blood was in very short supply.

“Need any help?” I asked when I stepped away from Louis’s bed.

“Not with the surgery — I’m done here. But he’ll need at least four units of blood. They’re checking with the blood bank to see what we have left.”

I walked out into the surgeons’ lounge and saw the lance corporal sitting on the couch, clutching his helmet to his chest. His eyes had softened. They now held less rage and fear and something more like sorrow or remorse.

He looked up when he heard me, the unspoken question obvious on his face.

“Louis is alive,” I said. “He has a chance to recover. That’s the best we can do here.”

The corporal nodded slowly, then looked me in the eye. “And the other guy?” he asked.

Before I could answer, the overhead speakers crackled and a voice broadcast throughout the hospital.

“Attention: This is the blood bank. We have a critical need for whole blood, type B negative or O negative. If you’re willing to donate, please come to the lab immediately. This is a critical need.”

Every time I’d heard the call for a whole blood drive before, I’d been in the middle of an operation and thus unable to give. This time I wasn’t a candidate because I’m type B positive. The corporal stood and stepped past me.

“Where are you going?” I asked.

“I’m B negative,” he said. “Sounds like somebody needs my blood.”

I reached out and grabbed his shoulder. He stopped and turned to me.

“Corporal, there’s something you need to know,” I said.

“The blood drive is for the man you shot. The terrorist who shot your friend.”

The corporal stiffened. His eyes filled with tears. He clenched his jaw tightly and looked at his boots for a few seconds.

Then he pushed my hand off his shoulder. “Sir,” he said, “lots of people have done things for me that I didn’t deserve. I shot that man in battle, but letting him bleed to death when I have the power to save him — that wouldn’t be right. Excuse me.”

He walked toward the lab, leaving me standing in the lounge with my mouth open, wondering if I would have done the same thing.

I never saw the corporal again. A few days later, we received news that Louis had survived the trip to Walter Reed and was improving. 2280 eventually woke up, saved by Army medics and Tim’s skill and ultimately by the corporal’s sacrifice. Even though some of the instruments used during his surgery were not properly sterilized, he never became infected.

The morning we transferred 2280 to Abu Ghraib, I checked his labs and saw that his blood counts were normal, even though he’d lost eighty percent of his own B negative blood in the operating room. I knew that most of the cells contributing to those normal lab values came from the kindness of an American Marine corporal.

I was fortunate to work in a place where most of what I saw held up to the light of inspection, but I knew some of the soldiers I cared for were not righ teous or heroic in every moment of their individual wars. Even in the hospital, signs warned the women not to walk around alone at night because there had been rapes on the base. I will not pretend that everything I saw or heard about regarding our troops’ behavior was good, but most of it was. And since most of those stories don’t make the news, because human nature usually requires something scandalous to sell papers, it is my hope that the story of the corporal’s blood flowing into 2280 will resonate with anyone who’s ever benefitted from someone else’s sacrifice, especially when it was undeserved.

Show me another army in the world full of soldiers willing to sacrifice their own blood for their enemies.