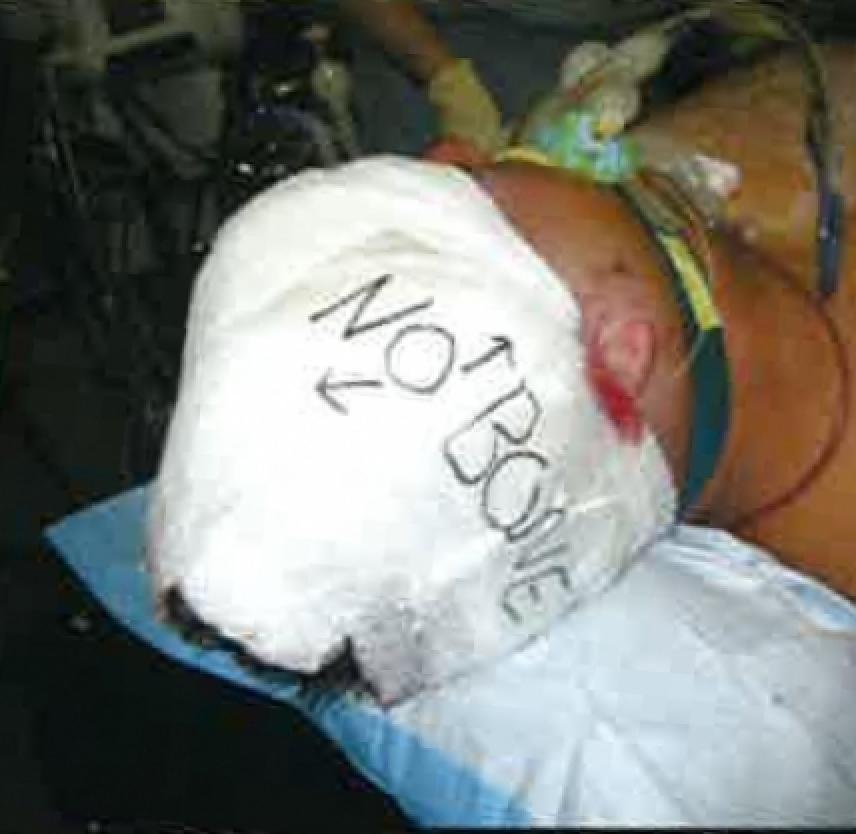 "Patient 2185" is excerpted from Dr. W. Lee Warren's, No Place to Hide: A Brain Surgeon's Long Journey Home from the Iraq War. Warren’s story is an example of how a person can go from a place of total loss to one of strength, courage, and victory.

Back home, when I had a patient whose injuries were neurologically devastating, I would leave the choice to the family. We’re very good at keeping people alive, I would tell them, but the brain injury itself determines how much of a person we can actually deliver back to them. With aggressive surgery, I can often save someone’s life despite the severity of the injury, only to commit the family to many years of breathing machines, feeding tubes, and long-term-care facilities. Usually, families don’t want to save their relative if they’re going to be “a vegetable.” We then follow the family’s wishes and humanely withdraw artificial life support and keep the person comfortable until they pass away.

2185 was such a patient. His injuries were technically survivable, but he was never going to be okay. The problem was that I couldn’t go out and speak with his family. I had to decide. Should I try to save him, knowing that we were already in a critical overflow situation in the hospital? Committing to surgery on 2185 would mean using one of our instrument sets, along with precious blood products and two hours of time during which anyone else who needed brain surgery would have to wait. And after surgery, he would tie up one of the ventilators, the resources of the ICU doctors and nurses, and stretch even further the limits of our ability to care for all the patients the enemy had already provided for us in the past few days.

I walked into the scanner and looked down at the young man. He was small, probably five-six or so, and thin. His brown skin and brown hair and brown eyes contrasted sharply with the bright red blood that dripped slowly from dozens of tiny shrapnel wounds all over his head and neck. The whites of his eyes were bloodshot, and his right eye had the milky haze of an intraocular hematoma. I looked into it with my penlight, and saw a little hole in the corner, where a small fragment had entered his eyeball.

Add blind in one eye to his list of problems, assuming he survives and wakes up.

His left pupil was still small but did not constrict. He had not been intubated yet, since he was still breathing when he arrived at our hospital. I looked at his cracked, bleeding lips and noticed the pattern of his respiration. He took several rapid, shallow breaths and then suddenly made a faint gasp. I watched the monitor as 2185 took no breath for about twenty seconds. “He’s Cheyne-Stoking,” I said. Cheyne-Stokes breathing indicates a serious brainstem injury, or that the brain is under so much pressure that the respiratory drive is failing.

2185 made a sudden loud, watery gasp. He took several deep, long breaths, the other half of the Cheyne-Stokes pattern.

I put my hand on 2185’s chest. He was only the latest victim of this war. For a moment I stopped being a doctor and became just Lee Warren, thirty-five-year-old kid from Broken Bow, Oklahoma. I wondered about 2185’s life, his family, his personality. I wondered whether he was married, and what he thought about the war and our involvement in it, and what his last thoughts had been before that bomb had gone off. He gasped again, which shook me out of my few seconds of being just a guy watching something awful happen to another guy. I took a deep breath myself and went into neurosurgeon mode.

There’s a place neurosurgeons are trained to reach. A mental refuge in which to hide when the decisions you’re forced to make go against some aspect of your moral code, your upbringing, your basic societal impulse to help people. We’re supposed to comfort ourselves with our knowledge of the medical literature, our understanding of things like the inner workings of the nervous system, our higher level of insight into the difference between living and being alive. That’s why some of us can seem arrogant, cold, or distant at times; we’re hiding in a place where you can’t see how much it hurts to be the one to decide when someone else has to die.

I looked at the nurse across the table. “Take him to the ICU, give him some morphine. Keep him comfortable. Let the Czar know 2185 is not having surgery.”

Flip the switch, write the order, move on to the next patient. That’s how we’re trained. If only it were that easy, I thought. I watched the nurse wheel him down the hall, then turned to Tim. I needed a minute to be just another person before I had to be the impenetrable military neurosurgeon again.