Ketchup on the Baseboard: Rebuilding Life After Brain Injury 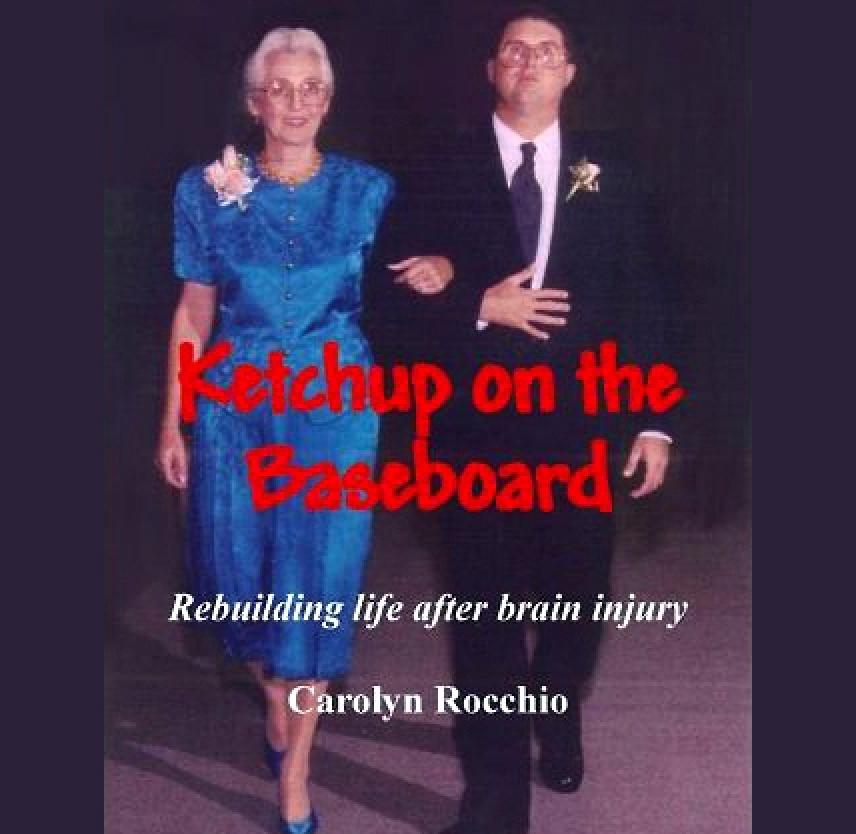 Truthfully now I feel as though I am on the cusp of so great a step forward that it almost seems unwise to think of stepping back. - Tim

After a smooth flight home, we were greeted at Fort Lauderdale International Airport by a group of family and friends bearing a huge sign - “Welcome Home, Tim!”

Tim grinned and announced, “I'm home and I'm alive!” And thus we began the process of the first day of the rest of his life.

Coming home was wonderful after three months in the local hospital and three and one-half months of being in a strange city. For Tim it had meant living in a hospital room and for me living in an efficiency apartment. There's nothing more comfortable than one's own bed and familiar surroundings.

Joe and I became the logistical problem solvers. The arms of Tim's wheelchair would not fit under the edge of the family dinner table, preventing Tim from eating comfortably. Joe went to a home improvement store and purchased table legs which he cut to an appropriate length and screwed to the bottom of the existing table legs. By elevating the table two inches, Tim could roll his wheelchair up to his usual place with the family. Once he was out of the wheelchair, the added legs were simply removed. We chose not to ramp our walkways nor make expensive home renovations as we expected Tim to “outgrow” the wheelchair within a few months.

We lived in a two-story home. We solved the problem of getting Tim up the stairs by transferring him from his wheelchair onto the second step on his backside. From there, Tim scooted up the stairs on his butt, moving one step at a time. When he got to the top of the stairs, Tim needed help getting upright, but then used a walker kept there to get to his room.

A prescription had been written for a bath bench to accommodate Tim's bathing needs; however, Tim shared a bathroom with Scott and we didn't want to inconvenience him with a lot of extra paraphernalia in the bathroom. I purchased a sturdy, folding lawn chair with wide webbing that I could set into the shower stall and easily transfer Tim into for bathing. My husband installed a hand shower head that enabled Tim to manage his shower more independently. Little by little we learned to manage disability in our home without inconveniencing other family members.

Shortly after his arrival home, Tim's friends asked permission to have a homecoming party on our pool deck.

It was a beautiful June night. The band arrived and set up, and friends began to gather. It was the kind of evening the “old” Tim would have loved - good friends, lively music, lots of salty snacks, and two kegs of beer. He was initially excited to see so many old friends but he asked to come in the house after about an hour and soon after went to his room. I puzzled about his reaction. Was it too stimulating? Was he fatigued, or did he realize how different he had become as a result of the injury?

The party continued for some hours into the night and everyone had a great time except for Tim. The next day he laughed uproariously when we said the police came by twice because neighbors across the canal complained about the loud band. Many persons with brain injury have difficulty modulating responses. Everyday occurrences can be either rip-roaringly funny or dreadfully unpleasant, and often inappropriately interpreted.

Tim made other efforts to regain his old life by trying his hand at some pre-injury hobbies, meeting with only limited success. At the time of the injury he held a federal gun dealer license (which we had to legally terminate on his behalf) and had a gun collection. Prior to returning home, I had asked Scott to examine all his brother's guns and remove all the ammunition from the house.

One day Tim decided to clean his guns and he did a good job, but he could not reassemble them. I soon realized that Tim's inability to organize and reconstruct things was typical of frontal lobe dysfunction. Fortunately, at this stage of recovery his emotional lability protected him from being upset by his lack of capabilities.

Tim had also been a skilled photographer who used sophisticated equipment. Now the loss of functional sight in his right eye limited his ability to focus. What did hold his interest was music. He spent hours in his room making tapes from the radio or listening to his stereo.

The next activity Tim attempted was bike riding. Before the injury, he had been interested in bike racing and owned a light-weight racing bike. Using this bicycle required a great deal of skill, merely to insert one's toes into the toe clips. It seemed obvious to us that it was a risky undertaking, but Tim was adamant. After repeated pleas on his part, we said he could try, but only if he abided by our rules.

We insisted that he use one of the family's sturdy girls' bikes, which did not have the crossbar found on boys' bikes. Tim also had to wear a helmet and elbow and knee pads. We took the bike to the city cemetery nearby, where there were narrow perimeter sidewalks with lush grass on either side.

As it turned out, the bike ride was short-lived. Tim managed to pedal a couple of times before falling, and fortunately he was not injured. Planning for the possibility of failure can allow you to let someone try and not overly worry about the outcome. By trying and failing, Tim admitted that he couldn't ride a bicycle and has never asked again.

After that Tim confined his riding to a stationary bike.

For eight months after rehabilitation, we kept a highly structured home program in place. Tim had outpatient speech therapy while Joe and I became quasi-therapists. I managed occupational and physical therapy goals while Joe and Tim found stimulating ways to make progress through recreational activities. The schedule was rigorous and Tim was cooperative. He made cognitive improvements. I kidded him about his newly acquired work ethic. Somewhat of a slacker pre-injury, he seemed to realize the importance of what he was now doing and how it might contribute to a more independent life in the future.

Tim's outpatient speech pathology sessions were going well. For speech therapy he returned to the local hospital where he had been admitted right after the car crash. Anita Zatz, Director of Speech Services, who had evaluated and worked with him before he went to Craig Hospital, continued his speech program upon his return. Completing a session one day, he and Anita emerged from her office laughing and Tim seemed particularly pleased with himself as if he had achieved something special.

Together they shared the reason for their mirth. While using a standard speech/language workbook in which the patient had to correctly identify various analogous words, Tim adamantly said the book was wrong. Anita agreed that there was an error in the workbook and Tim decided they should write the author to alert her to the mistake. With Anita's help, Tim composed a letter to the author.

Several weeks later the author's response arrived. In a stiff formal letter she thanked him for pointing out the error and assured him that it would be corrected in the next printing. However, she failed to get the point. Anita and I were pleased that Tim was cognitively capable of recognizing the error and thought it proper to notify the author. However, we were disappointed that the author did not use the opportunity to acknowledge Tim with a more personalized response. She was a recognized author in the field of brain injury and could have made a positive impact on a young man at a time when he was questioning his own abilities. So often persons with brain injury feel “dumb” and inappropriately think of themselves as retarded. What a missed opportunity.

Excerpted from Ketchup on the Baseboard by Carolyn Rocchio, published by Lash and Associates Publishing/Training, Inc. Copyright © 2004. All rights reserved. www.lapublishing.com.