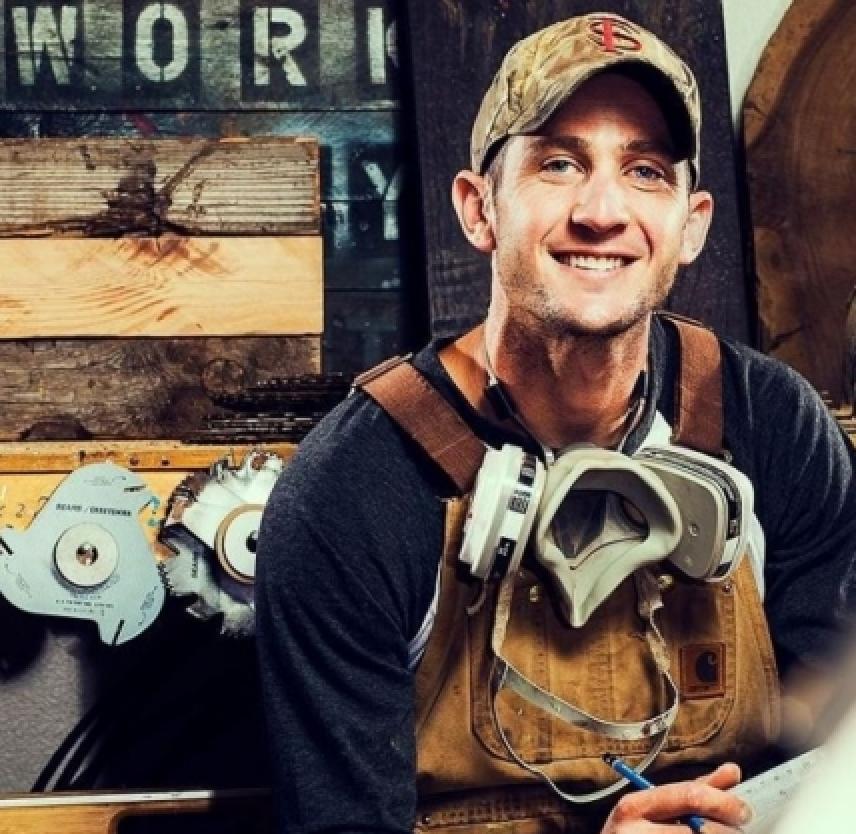 Because of his combat injuries, Army Staff Sergeant Russell Smith cannot sign his paintings. A “painter’s signature” is the final stroke on a canvas, integral to an artist’s style and recognizability, so Smith struggled with the fact that his loss of fine motor skills precluded him from signing his name in handwritten letters. But being the kind of guy who always has a Plan B  he came up with a different signature. On one corner of each of his huge, abstract, Pollock-esque canvases, he throws on a color splash that doesn’t match the rest of the painting. “It’s become my ‘signature signature,’ my style,” he says.

His “signature signature” also speaks to the fact that he lives with a daunting laundry list of injuries sustained in 2003-2005 in Afghanistan: traumatic brain injury, post-traumatic stress, hearing loss, and the need for two full knee replacements and eight back surgeries.

Like his painter’s signature, Smith has learned to get back into the swing of living life fully with what he calls his “work-arounds.” He can’t hold a pen and write legibly, so he uses a computer and a smartphone. He can’t hear as well as he once could so he wears hearing aids, uses a Bluetooth in the car, and focuses on maintaining eye contact with people he’s talking to. He has trouble with his memory, so he and his wife set up an elaborate system of reminders and schedules with the help of a big white board and synched phone apps. He knows he has issues with impulsivity, hypervigilance, and anxiety from too much stress, so he manages his time and activities and asks for help when he needs it. But most of all, Smith focuses on seeing the good in everything.

“Sure, TBI sucks. PTSD sucks. They do! But what do you get if you give up? Nothing,” he says. “You can’t undo what’s done, you can only work around it and do your best to move forward. Instead of dwelling on the fact that you got blown up and some stuff no longer works the way it used to, you embrace it and laugh about it when you can. It is what it is, right? It. Is. What. It. Is.”

Smith maintains that he has always been a glass-half-full kind of guy, but after he was blown up overseas, he had to work hard to call his spirit back. He is currently in the process of being medically retired. Among his other injuries, he has cognitive issues resulting from his brain injury, which make it impossible to resume his duties as a high-clearance member of the Missile Defense Program. Smith credits his therapists and doctors as well as the evaluation boards at the VA and DoD for all the help he has gotten since his injuries. “There will be bumps in the road,” he says, “but there are always good people out there to help.”

He also credits his wife, Heather, his friends and Army buddies, and his ferocious faith in God for his successful recovery. It’s because of them  that he wakes up looking forward to each day instead of the opposite, which he says, happens to many veterans who have been severely injured — and irrevocably changed — in combat.

“It’s not like things are always easy. Not at all. But it’s how you look at it, how you respond to the mistakes you make and the challenges you have and then try to do better from there,” he says. Smith has three children — a daughter, 9, and two sons, 3 and 2 — plus a baby on the way. He remembers the time his wife left him to babysit and how, because of his memory problems, he forgot the children were there and left them alone at home. He still cringes when he thinks about what might have happened, but he knows that dwelling on his mistakes is not helpful. Instead he pulls his attitude up by the bootstraps and remembers the core values taught to him in the Army: loyalty, duty, respect, selfless service, honor, integrity, and personal courage. “You have to focus on the good, even during stressful times. You can get through. It’s a choice.”

While in recovery for his physical and psychological wounds, Smith took it upon himself to learn as much as he could about TBI and PTSD. He knew that understanding why he was acting certain ways or making certain mistakes would help him figure out how to solve those issues, or to work around them if necessary. He called it his self-study.

He also started to return to his love of art, of creating something out of nothing.

Paying it forward with art

In his teens and early 20s, Smith had always been interested in the arts and had explored different media, but after he was severely wounded in two close-range blast explosions in Afghanistan he had to rethink how to approach his art. His talent for photography was no longer what it had been, his penmanship was poor, and his craftsmanship skills were severely diminished. He had to put his work-arounds into practice. Recalling his work with a particular art professor in college, Smith developed a new style in which he united an abstract format with his love of recycling and reuse of diverted materials. Soon he had found a niche he enjoyed, one boasting enormous canvases of 30 feet and landscapes of spattered colors. Even the use of the simple color splash in the corner of each work to mark it as his own instead of a traditional formal artistic signature became a work-around for his issues with TBI. “I work within my boundaries,” says Smith. “But I push those boundaries toward a limitless horizon.”

Smith has found that through his love of art he is able to help other service members and veterans deal with their TBI and PTSD. Through volunteer work with Good Samaritan Organization which helps disadvantaged kids, homeless people, and others in need, Smith found out about the Camp Fire Cabin in Santa Barbara. The Camp Fire Cabin, although neglected and in need of repair, is an historic monument and was used for various activities by the Good Samaritan as well as the Camp Fire organization that owns it. Smith thought it would be the perfect place to hold art therapy classes for injured service members and veterans like himself. With approval from Camp Fire plus his own money and elbow grease, Smith and some friends renovated the cabin. He now holds art therapy classes through his program, Warriors Way, once a week for an average of 30-50 people. Many of the people who attend are homeless vets who live in the local Good Samaritan Shelter. “It’s less a class than a safe place for veterans to show up and do art, to focus on what makes them feel better,” he says. There, veterans can paint, draw, make lithographs, and use stencils and clay. Soon he hopes to add welding and carpentry.

On a recent afternoon, Smith was working with one of the men in his program. The vet really opened up about his issues with TBI and PTSD and they “went to town” on a few canvases, staying well after closing time. While finishing up the canvases, they discuss the veteran’s life, his goals, and his outlook on the future. “The joy that these paintings brought to this young man absolutely blew me away,” says Smith. “Art to me has always been something that I have used to express myself, a way to get out of my own head. To see that happen with this young man was a really objective reminder of why I believe in what we're doing with the Warriors Way.”

Looking forward, Smith hopes to expand Warriors Way. He credits the VA with its shift toward more holistic therapies like yoga, acupuncture, and art and music therapy and hopes that it might support his program so that he could expand it. Smith is currently funding Warriors Way primarily out of his own pocket.. He keeps his costs down by stretching his own canvases and mixing his own paints, raising awareness by placing his large paintings in local ice cream shops and doctors’ offices, and by getting VetsCorps staff and behavioral health specialists to volunteer in his classes like visiting artists.

“Some of these guys have schizophrenia. Some have TBI, PTSD. A lot of them are on many medications. It’s hard to function with all that going on, but I think it’s a relief for a lot of these guys to come to the cabin, to feel free, creative, safe,” says Smith. “Art can help you escape from all that is racing around in your mind.”

When one of the guys at the cabin finishes a painting, Smith will wrap it up for him to take home. And he’ll encourage the veterans to bring their sketchpads with them and let their art take them away whenever they need an emotional refuge.

“The cabin is like a beacon of light for these veterans,” says Smith.”It’s a place to come to let confusion transform into calm, if even temporarily.”

So proud of you Russell! You have always had a big, caring heart!

Where can we view/purchase his work?
Wow he is inspirational! Shows what attitude faith plus a good support system can do !
Dude you rock
“Art can help you escape from all that is racing around in your mind.” For me, its photography!! Issues with brain chatter and chronic pain since TBI, but my photography has become my meditation as that all goes away when I am taking photographs. May your art continue to heal you!