Chrysalis: Reinventing A New Narrative for Life after TBI 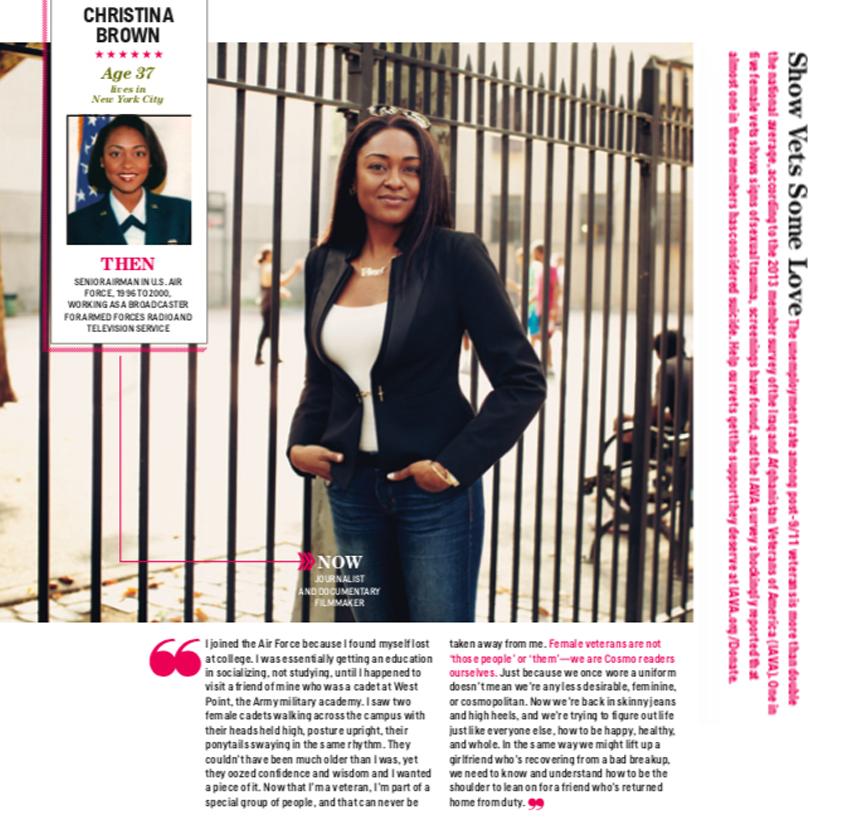 I still remember the crisp, cool night, in 2013, when my boyfriend, Eric, and I, hastily dashed out of the apartment, in Manhattan, to walk less than a block, to a nearby grocery store to buy the latest issue of Cosmopolitan magazine. For the November edition, the magazine was featuring women veterans and what life was like after military service. Women have been serving in the U.S. Armed Forces since the Revolutionary War, and researchers estimate women represent nearly ten percent of the total U.S. veteran population. I was part of the group of women vets profiled for the magazine.

One of the editors for Cosmopolitan sent me a pdf of the article before it was published; I assumed, perhaps, so I could easily have it framed. That was not enough for me. I needed the piece in its intended form, not the weblink, not a file I could download and print, but the actual magazine.

The line to see performers at Upright Citizens Brigade (UCB), a New York institution, and improvisational and sketch comedy powerhouse, stretched the length of the block from Eric’s apartment to the grocery store. Despite the cold, and dog crap-stained sidewalks, many people sat on the ground, waiting for hours, for their chance to get in and see the show, and potentially lay claim to being able to say they saw the next rising comedy star cut their teeth on the UCB stage.

My boyfriend and I walked past them, the wind whipped comedy improv fans, as quickly as we could, stepping over blankets and portable heaters, trying to avoid the poo --- anything that might come between the magazine and us. Eric purchased every copy of Cosmopolitan the grocery store had for sale that night. Then he bought additional magazines from two nearby convenience stores.

Looking for the article, I hurriedly flipped through the magazine’s pages about “battable lashes,” and “how to be the best he’s ever had.” The caption next to my picture identified me as a journalist and documentary filmmaker. Despite spending years in front of the camera and having earned an Emmy award as a broadcast news anchor, a sense of pride, when I saw my image alongside the other women veterans who’d embarked on new paths outside of military uniform, washed over me and quieted internal worries about whether I’d waited too long to begin something new.

For more than a year, Eric and I, had been working on a documentary series about the struggles many veterans face upon their return home from war, in Iraq and Afghanistan. I had been a broadcast news journalist for over a decade, but I longed to go back to school to formally study documentary film. The fear of starting over when I was already in my late-thirties, kept me from applying to graduate school for many months. Eventually, I recognized that my desire to master the art and craft of long-form video storytelling was far greater than concerns about having to reinvent myself professionally as a filmmaker.

Eric and I had wrapped production on our docuseries and were garnering interest from networks. Plus, I’d recently finished writing and directing a project of my own, for one of my classes, at Columbia University Graduate School of Journalism, where I was pursuing a Masters.

But less than a year after the Cosmopolitan magazine article was published, a car crash derailed my prospects in documentary film. The auto wreck left me with a traumatic brain injury (TBI) and redefined what it meant to truly start over. Like two sides of the same coin, suddenly there was life before TBI and life after TBI.

I spent more than a year undergoing treatment, in Virginia, at a Department of Veteran Affairs (VA), brain injury rehabilitation clinic. The prescient decision to join the Air Force in my twenties set the stage for TBI rehab at a VA medical center, in my thirties. The former Airman who’d turned in an m-16, for a microphone, would have to emerge from chrysalis confronting life with a new set of challenges.

At times, I’d long for the countless moments, prior to TBI, when my brain would spark waves of anxiety and insecurity as I’d wax poetic about career reinvention. Now, suffering from short-term memory loss, I was grateful if I could simply summon the ability to remember whether I had showered, eaten that day, or turned off the stove. On average, the brain weighs approximately three pounds, but the organ is “the seat of intelligence, database of memories, the interpreter of the senses, and the director of all movement.”

While I had lost the ability to remember things that could have occurred moments or days ago, I clung to the incomplete memories I still had of pre-TBI Christina. The woman who’d faced the unknown before and thrived. Refusing to allow my brain injury to diminish me, I counted the days until I could return to New York, to school, and one day, hopefully, return to me, again. But the jeremiad of post-TBI Christina warned of the pitfalls of trying to measure healing based on accomplishments attained prior to my injury.

In 2017, nearly four years after publication of the Cosmopolitan article and my first documentary film class, I finally completed my Masters. The doors to Upright Citizens Brigade near my old apartment had been shuttered and moved to a new location in the heart of Manhattan’s theatre district. Today, to many people, the changes brought by TBI, like spring’s subtle nod to summer may seem imperceptible, but when starting over, nothing about life after traumatic brain injury is ever the same.

Christina, thank you for sharing your story. I'm praying for a full recovery and complete return of your short term memory. With God nothing is impossible. Bless you old friend.

I am so glad I came across your article Christina! I still think fondly of the times we gathered at the movie theatre and when you and Eric helped me and Anna move after your full day of moving yourselves! And your patience to take down the snowflakes just showed how considerate you were, generous with your time, and how much you cherished your friends and friendships. I hope this note finds you and Eric well, and I just wanted to reitterate that I think the world of you and Eric! Truly good, inspiring people. Much Love!

So great hearing from you Javier; hope you're doing well!

Great article. You are braver than most and, as your friend, I KNOW you will live a full and wonderful life. Be well, Friend!
Lamonia

Thank you Lamonia, the belief in brighter days being ahead and not behind you are sometimes all you need.

What a brave account of the courage to start over...and over again. Grateful to Christina for sharing and grateful for the opportunity to read.

Congratulations from one veteran to another from San Antonio, Texas. We are very proud of the woman you have become. Ain’t no stopping you now...
Formerly Tammy Jenkins

Thank you Mrs. Harris! Whoorah, from one AF veteran to another!

So glad to read! GG

Thank you, more reads to come!