Dinner with the Elephant 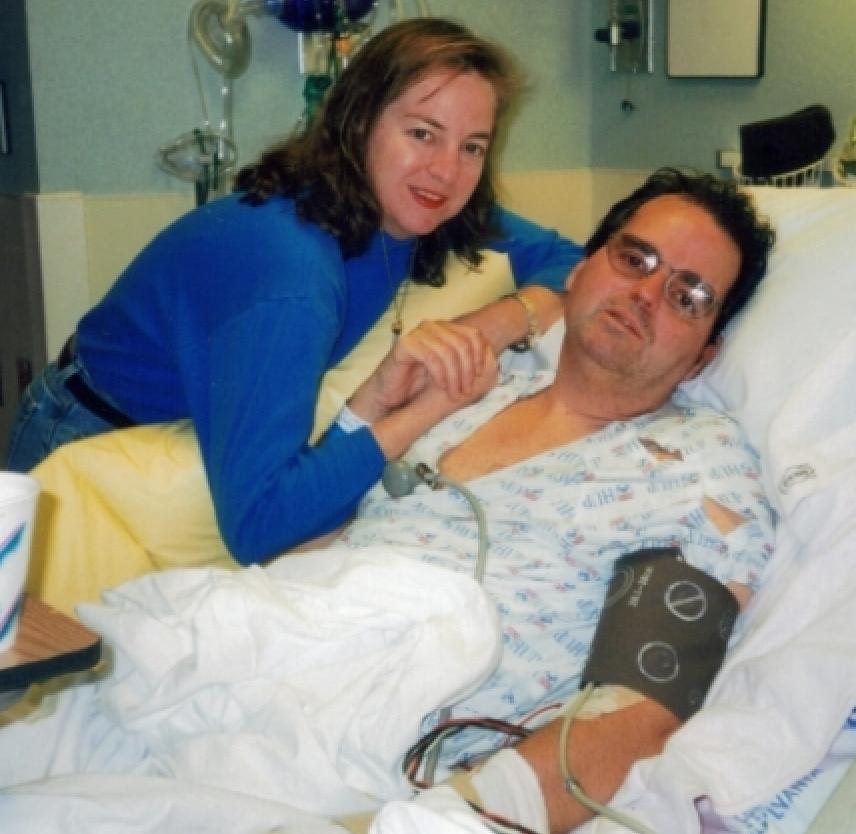 Related Content:
What Is Ambiguous Loss? How Does It Relate to Brain Injury?
Why Kids Understand Ambiguous Loss Intuitively
The Process of Dealing with Loss and Grief After a Brain Injury
Michael's Story: A Family's Recovery from A Rare Neurological Illness

Early one morning last month, with sleepy eyes half open, I watched from our bed as my husband, Michael, got dressed for work in our small bathroom. He carefully studied the neck of his long-sleeved t-shirt, looking for the tag, before pulling the garment over his head. He pushed his arms through the sleeves and smoothed the front, checking himself out in the mirror. A moment later, he pulled his arms back out and rotated the shirt around his neck. He had put his shirt on backwards—again. I pretended not to see.

Every day, seemingly insignificant events drive home the depressing reality that life will never be the same as before my husband's experience with Acute Disseminated Encephalomyelitis (ADEM), a relatively rare neurological disorder. ADEM struck on Halloween 1999 without warning or explanation, causing intense, life-threatening swelling in the brain. Overnight, my 47-year-old husband became paralyzed on his left side, and soon lost all sensibility. He forgot our 10-month-old baby’s name. His speech was incomprehensible. He was angry and anxious—a monster to me—yet he was my husband, and I fought valiantly to save him.

Skilled doctors at the Hospital of the University of Pennsylvania in Philadelphia used various therapies including intravenous immunoglobulin and plasmapheresis to bring Michael back from near death--twice. Exhausting stints in rehabilitation followed. We were blessed to have had good health insurance and—especially during the initial crisis—the strong support of family and friends. Slowly, one day at a time, we worked to unravel the jumbled mess left behind by trauma to the brain.

The road back has been long and difficult, measured not in weeks or months, but in years. Today, more than 16 years post illness, we are deeply grateful for Michael’s remarkable recovery. A stranger meeting him might not realize anything had happened. Still, daily events big and small remind us our lives and relationship have changed in ways we never wanted, leaving us silently grieving for how we once moved together in the world.

It’s called ambiguous loss, a term I first learned last year when I met Rosemary Rawlins after she delivered a keynote at a hospital in our town. A loved one is physically present, yet transformed in countless, often subtle ways, that alter his essence. For couples coping with brain injury, it’s the elephant in the room. Can you remain committed to one another when your chemistry is different? Can you rekindle the spark, if years of stress and struggle have extinguished it?

The changes are hard to describe, but their impact on joyful living is immeasurable. When we first met, I was awestruck by the way Michael remained totally calm while running a busy television newsroom. Today, basic multitasking can be a real challenge, which puts many jobs out of reach. Michael works full time but in a completely new field that pays a fraction of his former salary. This unexpected career change has impacted everything from where we live, to the cars we drive, and most significantly, self-esteem.

Michael needs to nap before our infrequent date nights, critical insurance against the problems exhaustion always brings on: less sharpness, more irritability, even fights. He speaks differently now, his vocabulary smaller, and sometimes misuses words, like saying “intermediate” when he means “intermittent.” He claims he wants me to correct such mistakes, but usually I don’t. Doing so only makes him feel bad.

Coping with ambiguous loss is a matter of letting go of former goals and dreams, and striving to feel equally good about the ones now attainable. While most days the elephant lives tucked away in the corners of our minds, occasionally he comes out to join us, most often at the dinner table. What follows is open, gut-wrenchingly honest communication in hushed tones, the warm candlelight between us somehow softening the hurt. Acknowledging the elephant from time to time feels good: It clears the air, leaving us reassured and recommitted, knowing we’re both still on the same page.

Today, Michael does many things that once were impossible. While post illness he could not read, he’s an avid news junkie once again, devouring daily newspapers and Time magazine. While once his inability to concentrate left him unable to cook a simple meal, today he creates delicious dinners every night with ease. While once he was totally deflated, he has just been appointed to the board of a nonprofit that helps foster children, important proof for him that his intelligence and life experience are still highly valued.

One of the most positive steps for me has been the return of peace and harmony to our lives. ADEM temporarily immersed us in chaos, terror and grief. Today renewed energy, hope and happiness dominate in our home. Even though we’ll always share it with an elephant.

Sandy Levine is a NJ-based television producer who writes and speaks about her family’s experiences following her husband, Michael Fairhurst’s rare neurological illness. She presents keynotes and workshops on “Surviving and Thriving After a Crisis.” Learn more at sandralevine.com. View an 8-minute video about the family’s journey called “Michael’s Story” at this link.

Ambiguous loss is something that feels challenging for others to understand, and sometimes on a journey that already feels pretty lonely, it can add to the frustration. I really appreciate the balance of this article. The light and the heavy. It all plays into living with brain injury. Thank you for this. It is really well written.

I think we are lucky that my husband doesn't have anger that others have. On the flip side he can't work or drive again. We all have our ambiguous loss. It's great that you can still connect. We cannot. I just don't have it in me to be disappointed every time I try to hold his hand or do something. Inevitably something comes up from him--my hand is cramping, I need to go to the bathroom NOW, what did I order for dinner, is it ever coming? Did I tell you about the time..... It's more constant loss in my case. I do use humor to deal but when I look deep in my soul there is nothing good that has come out of this for either of us or our child.
Great article about hardship and triumph through this frightening ordeal. Thank you for sharing.
I have been explained many times how this "new" person that my husband is after his TBI, is also an opportunity for us to help create this new person, a blank paper where we draw him again. Not easy, since all his memory from before the accident is gone, which means no memories from his family, our family, wedding, the births of our girls, the challenges we overcame together, our happy times, everything.... It's true, a lot of the chemistry is gone, and his frustration and depression these days it's something that is hard to deal with, specially for my 9 year old daughter. Don't take me wrong, I love my husband, old and new, and I'm so thankful for blessing of having him with us, and I know we are going to overcome this together, but it will have to be one day at a time... trying to find small successes every day and build upon those. Thanks for this article and the opportunity to also share my experience. :)
After complications from a brain tumor surgery, we still have our daughter but we grieve for the active, talkative teen girl we had before surgery. She is unable to communicate and unable to move due to stroke damage and a brief cardiac arrest. I never realized there was a term such as ambiguous loss; thank you for sharing your story.
Thank you to all who have commented. It is clear every situation is different...The problems, the pain, and finding the best ways to cope. Yes, we too find it helpful to take it one day at a time. And we know we are very fortunate that we have come so far in recovery.