Let the Boat Do the Work 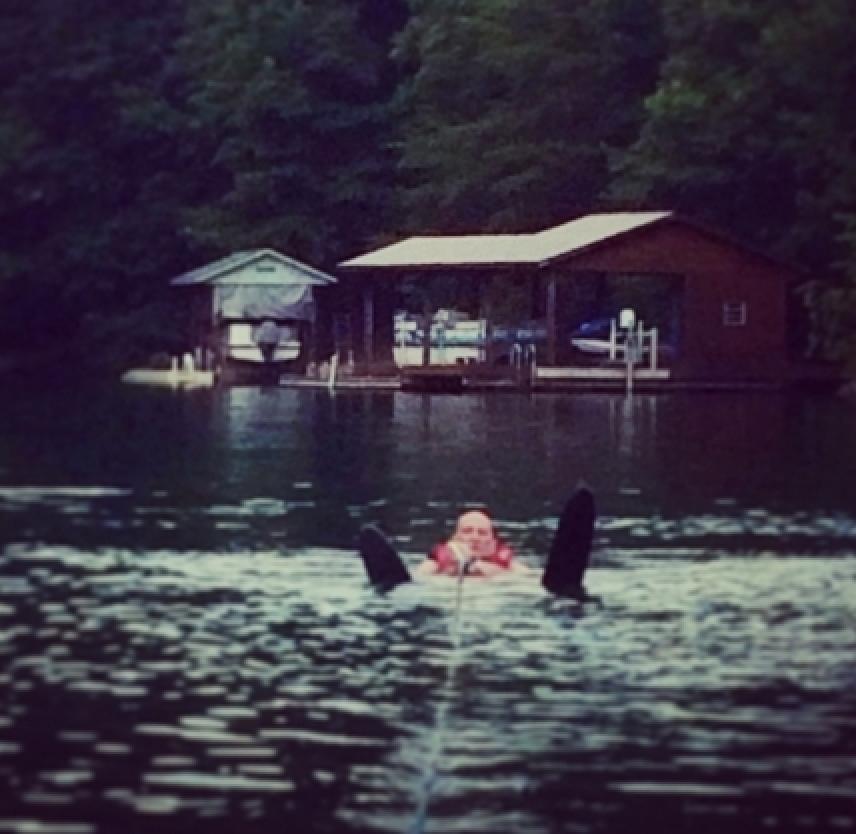 My dad was bobbing beside the boat. We could see he was struggling. He couldn't even really hear what we were saying. Before he jumped in the lake, he’d been told to take out his hearing aids. Now he was struggling, solely focused on one task — get two waterskis to cooperate long enough for him to position the ski rope between his legs, catch his breath, and yell HIT IT. Talk about over stimmed, I thought. Even so I, too, shouted at him. “Daaaaad!!! Just let the boat do the work!” Like, that was even original at this point.

My cousin, Colin, the captain of our family’s Smith Mountain Lake waterskiing expedition, had been leaning over the side of the boat giving my father his own calm, sentence-by-sentence, how-to waterski variation. He put the boat in gear to pull the rope taut and shook his head. “Oh man, talk about a role reversal,” he said. “Over twenty years ago and that was me in the water and Uncle John telling me what to do.”

He said what all of us were thinking. It was, after all, John who had taught most of us how to waterski. He was the best skier on the boat. No one — not my aunt, my dad’s cousin, my cousins, my boyfriend, or my mother — would dispute that. He skied on one and only one. Slalom. He skied fierce and graceful. He taught me to ski that way. But back then I was only 12 and still a wimp. My dad loved slalom skiing. I love slalom skiing.

I love it so much that over the past decade or so waterskiing had became a euphemism for all the stuff about my dad that we lost to traumatic brain injury, so much so that the word “skiing” comes up on an obnoxious amount of pages in my book, He Never Liked Cake, which isn’t about skiing or cake, but brain injury.

All the frontal lobe damage, forgetfulness, nasty fights, and incomprehension in the world couldn’t have kept my father from sitting in a boat and telling me what to do at the other end of a rope, which is why one afternoon last August had come as a surprise.

“John, Janna’s gonna ski,” Vicky said, poking him to wake him up. He fell asleep a lot now — his medication. She poked him again. “John?” she said a bit louder. “Are you gonna switch boats and watch with us?”

And that was it. When he didn’t want to do something, he didn’t do something. He stayed in the pontoon in the shallow end, and I hopped into the Suhries’ speedboat. I sat in the stern, facing backward with my arm around my Connelly Kidder, chin on my knees, watching him get smaller and smaller as we drove out to deep water. I swallowed hard and wiped the tears away with the ski gloves he’d bought for me three years ago for a better grip, because my forearms got so tired. They were a present from the days when he knew what presents I’d like. I ran the course flawlessly, save one buoy, that day. He would have been proud, but I knew it was over. No more skiing with my dad.

Many summers before this current one, I had given up the hope that my father would put a ski on again, and by the time he’d showed any interest in skiing again too many years had gone by.  We all knew that his body couldn't handle the pull of the boat and the gush of water that it takes to come up on one ski. So we told him “two skis,” and he told us “no.” And so it went every summer until this one.

“Yeah, I’m gonna watch you ski,” he told me the first day of our annual family lake vacation. I nodded and chucked that notion into the pot of things that he says he’ll do, but never does. And I had long since let go of the fact that my one-and-only waterski guru cares to watch what his daughter can do behind a boat.

On the last evening of our vacation he got in the boat with us. We found smooth waters. He stood up, tied up his trunks tightly, lest they fall off if he bit it hard. He buckled his life jacket and pulled each strap snug. He climbed up on the stern to jump in. Waves came and he wobbled. Oh, Jesus, John. Be careful. I heard my mom say under her breath. Yet, he was no more wobbly than any of the rest of us would have been. He cannon-balled in, surfaced, and shook his head and wiped his mustache. The pattern of actions was as if nothing had ever changed. I tossed one ski to him. He struggled more than we had thought he would to put it on. Colin tossed the other. And then the “let the boats do the work” began.

Seven tries. He didn’t get up. He didn't get up on two. He came close, but by the time his body was remembering what to do, his arms were too tired. After the last fall, he pulled the skis off and let them float in the water for those of us in the boat to retrieve. We clapped and gave him hoorahs. It’s what we do for anyone who is learning to ski, like my dad has done for years and years and skiers and skiers. He climbed up the ladder and back into the boat. He stood for a minute, sopping wet, red in the face and totally out of breath. He pulled off his jacket and grabbed a towel. He said nothing to anyone. He plunked down in the seat next to me. He rubbed his face dry with the towel. Then he smiled big and gave me a thumbs-up.