Square Pegs in a Round World 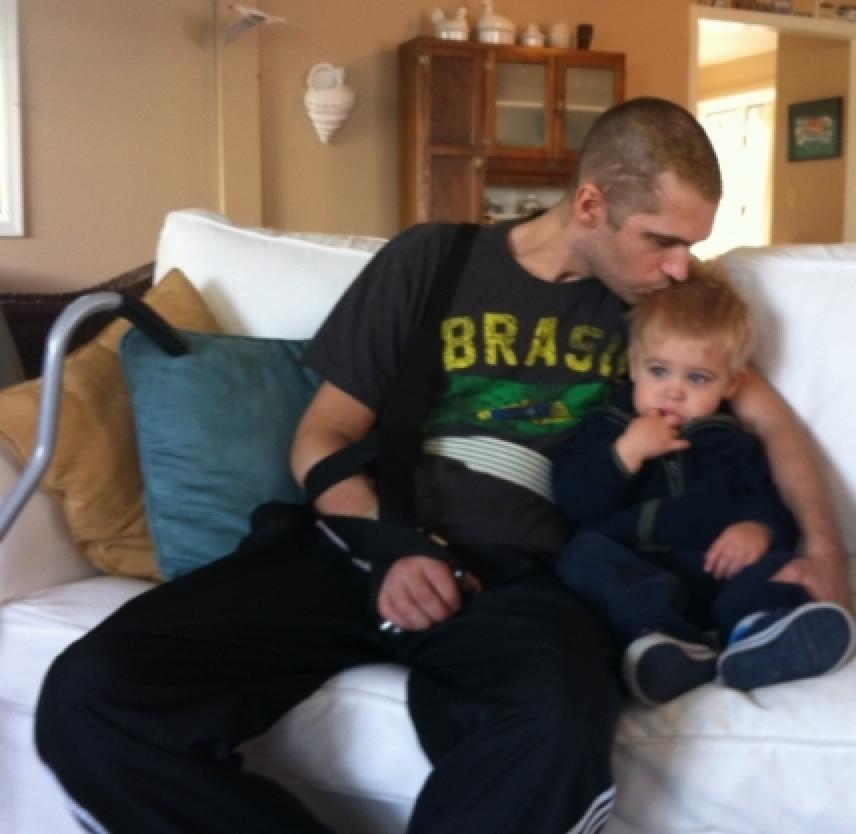 In the days following my husband TC’s assault, two vivid images began to occupy my mind. There was us, our young family, living penniless and in squalor, our son, Jack, once a lively toddler, now a sullen, withdrawn, and depressed teenager. It was my imagination’s best attempt at the worst-case scenario following TC’s devastating brain injury. My competing vision was much more preferable. In this scenario, TC was fully recovered, possibly an author or motivational speaker, certainly an inspiring advocate for brain injury. Jack and I stood by his side, proudly admiring his miraculous evolution.

In my mind, it could only be black and white. We were either going to make it or we weren’t. Quickly, I got to work, utilizing every available resource in an attempt to “fix” the situation. I began scouring the Internet for answers to the slew of questions I was rapidly developing. How long does a coma typically last? How much speech can a person recover? Do people with TBI return to work? If so, in what capacity? The list was, and continues to be, endless. At the time I thought I was looking for answers. The truth is, I was looking for reassurance.

I needed proof from people such as Gabby Giffords, Bob Woodruff, and other well-known people who had sustained severe TBIs that a nearly complete recovery was possible. I needed to know that marriages could not only survive, but even thrive in such difficult circumstances. I needed to know that things could turn out alright, because if it was possible, I was damn well going to ensure it happened. I imagine this response is fairly typical in people whose lives have just been impacted by TBI. For people like me (Type A, consummate planners), traumatic brain injury often represents the terrifying loss of our sense of self-control.

You see, prior to TC’s injury, I lived in a world where I could exercise a lot of self-control. I could take 1,000 photos until I found one that perfectly captured our charming little family for this year’s holiday card. I could estimate our future income with almost near precision and debate the merits of various throw pillows. It wasn’t that my life was perfect. It was that I could make it look perfect.

Brain injury pretty much decimates the illusion of perfection. Where we were once round pegs in a round world, we were now inarguably square. For months after TC’s injury, I would hold my breath when we went out to eat, praying he would order correctly and not confuse the waiter. TC would look at me with justifiable annoyance before reminding me, “I have to practice! What’s the worst that can happen?”

He was right. I was the one for whom people should have been holding their breath. If TC — the person with the actual brain injury — was unstressed about whether his latte order was delivered accurately, who was I to get so anxious about it? I didn’t realize that I had been devoting the bulk of my efforts trying to preserve an image — an image I had developed years ago, at around the time I stopped believing the world could handle any amount of diversity.

If I take my earlier worst and best case scenarios and place them on a spectrum, it’s clear our family has climbed far closer to best case over the past 17 months. But we’re still a bit oddball. We don’t move at lightning speed, a fact I needed to remind an AirTran representative last week when she scolded us because TC wasn’t running quickly enough to the gate. We often engage in frequent “correctional conversations” in public. Those of you who know aphasia may be well familiar with these. The script goes something like this:

TC: We’d like one large pizza. One with cheese. One with… pepp.. peppers.

Pizza Guy: So you want two pizzas? One with cheese? One with peppers?

Me: No! One pizza! You need to say half with cheese. Half with peppers.

TC: (Confused at trying to hold two conversations at once) Huh?

Perhaps our eccentricity is at its most prominent when ordering food, but I have a feeling the Maslins do quite a few odd things that perplex strangers. Whereas I spent the first year of brain injury meticulously trying to avoid these errors, in year two, I’m letting it all hang out.

Much of this mind shift is owed to the time we spent last summer in Halifax, Nova Scotia, where TC participated in intensive speech therapy. This was the first time we both truly recognized we were not alone in our challenges. We found it strangely relaxing to interact with other folks who were rehabilitating speech and physical limitations. In Halifax, we didn’t have to pretend we were something we’re not. Spouses were not expected to speak for their aphasia-affected partners. Participants were encouraged to take infinite time to express their thoughts. Awkwardness roamed free, to the extent that nothing really felt awkward anymore. In a world without judgment, we found it easy to be the best version of ourselves.

From what I can remember from my old life, no one really does feel like they fit in all of the time. The majority of us tax ourselves with consuming self-preservation efforts, simply to put forth the illusion of “belonging.” While I don’t expect to overcome all of that social pressure during my time on this planet, I’m grateful to brain injury for taking away my option of becoming a slave to it.

As we dive deep into 2014, I’m happy to cast aside my days of black and white thinking. The world can handle a little diversity. It can accommodate families that don’t quite fit the mold — whatever that means. None of us have the luxury of waiting around for a world of unanimous tolerance. Instead, tolerance has to come from within.

So, are we going to make it? You bet we are. It’s just not going to be picture perfect.

Thank you for sharing your experience with TBI. My husband was also in a coma due to a car crash, and although we were so grateful when he gradually recovered, our lives were never the same.

Perhaps our story will encourage you and others on this journey . . . https://www.amazon.com/Penned-Without-Ink-Trusting-Write-ebook/dp/B01JD8...

This article is welcomed, Thank You! I'm a TBI survivor and I appreciate people who can articulate this life. In my case my wife checked out on me emotionally almost immediately after I awoke from the coma. I didn't know my own name, didn't know her either, that offended her. It is such a blessing to have your partner beside you, staying in the fight WITH you! I didn't have that and can only imagine how helpful that would have been. I felt I was all alone in a world of pain and confusion.
Thank you for sharing, we have specialists saying my husband speaks nonsense when we have similar events. I understand what he is communicating but others don't because they don't spend the time with people with TBI they learn it all from a text book. Before they get their qualifications it should be compulsory to spend a year in the home of a newly affected TBI patient to get a full understanding of the challenges faced just to get by day by day.
My husband suffered an acquired brain injury a year ago due to bacterial meningitis and resulting. His long term effects is short term memory deficits. We too are a young family with two small children. God has provided for every need and we are so thankful for all the support we have. This journey is long and very difficult at times. But I have hope for continued healing and family adaptation. Blessings to you and your family, Heather
Wow, our family's struggle out into words. We don't fit the mold and probably never will. I guess it's just nice to know other people have similar conversations and marital dynamics. Most people don't get it. Glad some out there do!
Love this!
Hi, its hard to believe its taken me very near 5 years to reach out for help through this type of support - your blog. Thank you, Abby. My husband was diagnosed with a brain tumor in April of 2009, had complications from the first "routine" surgery and underwent a second surgery when severe swelling occurred and caused compression on his brain stem. The neurosurgeon (who also worked with the team for Gabby Giffords) removed all of the tissue in my husband's right cerebellum to make space for the swelling and placed him in a medically induced coma. After 5 weeks, he opened his left eye and has worked so hard to recover over these past 5 years. I remind myself daily to be grateful. Our children were 2 years and 5 months at the time of the surgery, I was one month into my new job as an elementary school principal and I was working on my doctorate. I get the Type A thing. Boy - was this a reminder of the simple things in life to appreciate. And, though my heart knows this, I must confess that I allow myself to ride the rollercoaster of expectations and sometimes am confused by what to accept and what to expect. Though we are in a much better place now than on April 17, 2009, there are still many challenges - the biggest right now is our marital dynamics. It is different and I try to be understanding and accepting but sometimes, I wonder if accepting just perpetuates the struggle of falling in love with my new husband. Any insight or resources on how to address the personality difference that accompanies the less subtle effects of brain injury? I'm all ears and all heart. ~Hopeful
Thank you for your encouragement. My 50 year old healthy husband had a stroke in October 2013, after spending 4 hrs in hospital ER being treated for a migraine. We are still very new to the whole dynamic of this situation. Many of his personality traits have made a 90 % turnabout! Thank you for sharing, I look forward to reading more as time goes on. ~Not the Nurse~
Thanks for your blog. It is great to hear somebody else's perspective on coping with a spouse with a brain injury. It's good to feel that we are not the only one's going through this. Suzanne