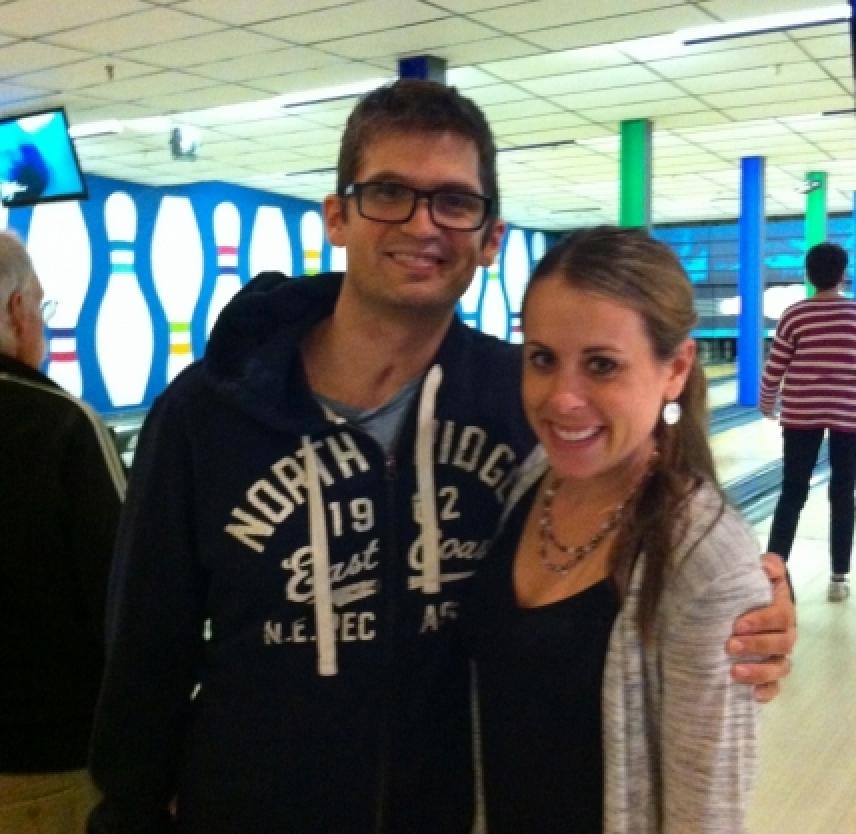 The air is a brisk 63 degrees and there’s a gentle fog rising over Halifax Harbor. It’s the perfect morning for a run, so I lace up my sneakers and give my husband, TC, a quick kiss as he heads to the computer lab for his next speech therapy session. He’ll spend a total of six hours in intensive therapy today, a typical day at Dalhousie University’s InteRACT Program in Halifax, Nova Scotia.

The journey that led us a thousand miles north of our home in Washington, D.C. began with a brain injury. In August 2012, my husband was robbed and struck on the head with a baseball bat while walking home. He survived more than eight hours on the street after the attack and then three months of acute hospitalization. And while his physical injuries were severe, they were nowhere near as devastating as the impairments to his language. As is common in left-sided head injuries, TC suffered a monumental loss of communication. Shortly after his injury, he was diagnosed with both aphasia and apraxia, two disorders dealing with speech and language. Aphasia makes it difficult for TC to find the words he’d like to say, a struggle that is compounded by apraxia, a difficulty in formulating the sounds that make words.

I sometimes refer to aphasia as the unexpected homewrecker. It robbed of us of the glue we felt so strongly held our marriage together: our ability to clearly communicate. For months following TC’s injury, we were unable to have a conversation as simple as deciding what to have for dinner. Remembering my name or tracking conversations about our day-to-day plans were a struggle for the man who had previously worked as a consultant in the renewable energy field. Before long, our attempts to communicate left both TC and me feeling frustrated and terribly isolated.

Although TC was getting speech therapy twice a week at our local hospital, we quickly realized he would need a much more rigorous intervention to address his language needs. Unfortunately, aphasia is not a well-funded or widely discussed disorder in the medical field. I struggled to find professionals who could answer my questions and direct me toward the type of resources I hoped might be available. On my own, I began perusing literature on the Internet and discovered three intensive speech therapy programs in North America. Among them, I found the Intensive Aphasia Program at the Rehabilitation Institute of Chicago, the University of Michigan Aphasia Program (UMAP), and the InteRACT Program in Halifax.

After being in touch with Linda Wozniak, the director of InteRACT, we felt the program offered the tailor-made type of therapy TC most needed. We knew that the requirement for caregiver participation would mean five weeks away from our 2-year-old son Jack, but with the help of our parents, we were able to devise a plan that allowed us to keep him in their care for a month and then join us for the final week of the program. It was tough to be away from Jack for this extended period of time, but with such important goals to work toward, we knew the temporary separation was necessary. Ultimately, we had to keep in mind that Jack would be benefiting from this experience in the long run.

As one might imagine, intensive therapy programs are not inexpensive. The unfortunate reality for those of us in the world of brain injury and stroke is that insurance plans rarely cover the extent of therapy that is truly needed by patients. And although it is sometimes possible to petition your insurance provider for additional services, most of the people we met at InteRACT paid out-of-pocket for the program using their savings or, in our case, generous donations from friends and community members. While the cost of these intensive programs is a significant hurdle, the rewards are immeasurable.

When we arrived at InteRACT, we hit the ground running. Because he had submitted a video of TC speaking as part of the application process, TC’s therapists had already begun to construct appropriate therapy goals. The structure of the nearly five-week program allowed TC three hours of individual therapy every day. During these sessions he worked on developing his reading and writing skills, mastering functional tasks such as grocery shopping and paying bills, and practicing word recognition and fluency. Daily group therapy consisted of meeting with other aphasia participants and engaging in creative activities such as singing and making art. Additionally, TC spent an hour each day working one-on-one with an intern to remaster computer skills such as e-mailing and blogging. The level of attention and care he received from the small but highly trained professionals at InteRACT was unparalleled. They are a team of true aphasia experts, committed to helping people regain functional and happy lives.

Care for the Caregiver

One unexpected outcome of this experience was the healing I underwent as a caregiver. For months I had been trying to wear the hats of caregiver, therapist, and wife. Knowing that I could entrust this talented group of individuals with the important task of treating my husband lifted an enormous burden of responsibility. On the mandated caregiver days-off, I had the opportunity to reclaim neglected parts of my life such as exercising, journaling, and reading for pleasure.

Being away from home was also healing for my soul. The combination of months of caregiving, along with the trauma of experiencing such a violent event had me feeling utterly depleted. I needed to carve out a special place away from the chaos of our post-injury life and I feel incredibly fortunate to have found that place in Halifax.

In preparing to begin the program, TC and I fully expected to work hard. What we didn’t anticipate was that we would have so much fun in the process! Twice weekly, group outings such as bowling, hiking, and going to the movies reignited a sense of enthusiasm and playfulness that had gone dull in our relationship. We learned to once again enjoy each other’s company and to better manage the stress and worry that had long been holding us hostage in our lives. Most importantly, it highlighted the idea that we must keep attending to our marriage, even with the added stressor of a brain injury. Recovery, as we learned, is not about therapy alone. It’s about healing the whole person and — in our case — the whole family.

Before InteRACT, neither TC nor I had ever met another individual with aphasia. It felt like a condition that was exclusive to us and it was hard to imagine that there were others who had suffered or struggled in much the same way. The bonds we formed with the other InteRACT participants were life changing. For the first time, TC felt understood by a group of people who could truly empathize with his challenges. I found comfort in bonding with other caregivers, sharing our fears, frustrations, and successes. There was a feeling of safety in knowing this particular group could relate to and witness our communication issues without judgment or discomfort. Now at home again we continue to keep in touch with many individuals from the program. It’s exciting to hear about people’s progress and marvel at everyone’s continued improvement.

Participating in an intensive speech program is the best decision we could have made for our family. It certainly wasn’t an all-in-one solution to TC’s recovery, but it equipped us with the tools and knowledge we needed to continue working on TC’s speech at home. We both firmly believe that everyone with a brain injury deserves the best treatment possible. Unfortunately, it is often up to the caregiver and the patient to decide what this treatment is and how to get it. If your family is considering a similar experience, please consider checking out the fundraising resources below. As a brain injury community, we can unite ourselves to help people to connect with the services they need and deserve.

Thank you for bringing up the topic of aphasia.
Another well written article, Abby! Thanks for taking us along on your journey to wellness.
I have two brain injuries, the 1st from when I was two. So my whole life. I went to Rusk Rehabilitation in NYC, it is very exensive hwever. i had a friend, with whom I am still friends, who suffered from Aphasia which was most devastating fr him! It made him want to burst with anger although he never showed us that. Thank you for your kind and informative words. lm
Abby, thank you for being transparent about your husband's injury and Aphasia. Rosemary Rawlins forwarded your article to me, because my husband also has Aphasia. He suffered a TBI during a wakeboarding accident 2yrs ago. We have 5 kids (our youngest being 3 at the time of injury). So much of what you wrote about in this article, I can relate to. Corey (my husband) and I also attended an Intensive Aphasia Program 3mos after his accident (RIC in Chicago). It was so helpful and I'm so thankful we went. I keep in contact w/ so many of those people and it's so comforting to know you're not going this alone. Also, what you said about marriage is so true. We talked about everything. We were best friends and when that was taken from us, it was devastating. We are now learning how to better communicate w/ one another. Corey has improved alot on word-finding. His struggle is more so in comprehension; which can be very frustrating for both of us. But I will say, even though were only 2yrs out, we have come a long way. Once again, thank you for sharing your story. I will continue to follow your blog. Unfortunately, there are not very many people out there talking about Aphasia. At least not that I've been able to find. So it's good to see that you're bringing more awareness to it. Thank you. Best of luck to you, your husband and your son. I will keep all of you in my prayers.
Abby, thanks for posting this. I also saw your husband on the news. My husband and I are planning on going to InteRACT this summer. Your husband reminds me of mine -very positive and determined to get better. I hope your family is doing well.
Excellent article.
Hi, I know this condition only too well after my stroke from a ruptured aneurysm. To loose your ability to communicate is devastating, you start to disappear and become invisible only to be replaced by frustration, loneliness and sadness. How can you explain your world to your family and children when you can't communicate? I am working on a project to help families understand by creating a story see our website for more information www.storypath.co.uk. Please help me to support families, no one should be left alone to cope.