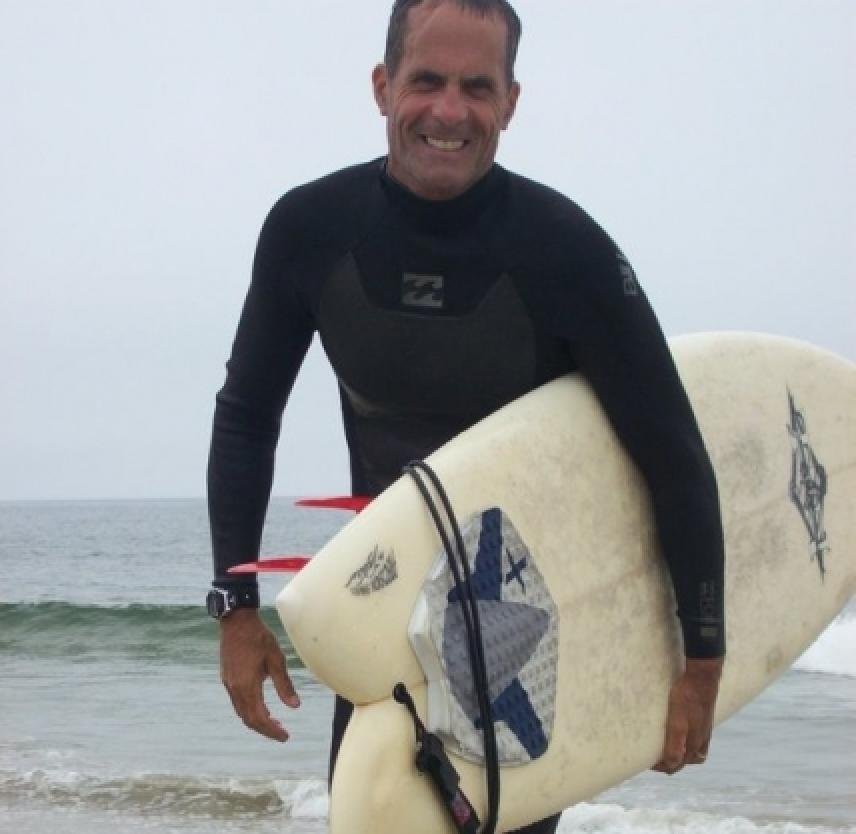 It’s hard to say which I found more disturbing: seeing my husband sit despondently in a chair because he felt disabled, or watching him strive to do the things he did pre-injury that could very well injure him again.

For a long time after he was initially hurt, Hugh needed lots of nudging and pushing to get up and go. He had significant initiation and executive function impairments. But as he began to clear, he gained more stamina, and once he developed insight (knowing that he had a TBI and was disabled), he began to set goals. At first, he had simple goals: to regain his balance or walk around the block, but later, he wanted desperately to do three things: to drive, ride his bike, and surf. When his bike buddies chipped in and bought him a new bicycle, I felt sick to my stomach just thinking of Hugh on a bike again since his injury was sustained when a car hit him as he rode his bike home from a workout. But Hugh insisted he would never feel whole again until he could ride.

As it turned out, the first vehicle he was cleared to ride was his John Deere tractor. I’ll never forget watching him through our kitchen window as he drew circles in the back yard with his ride-on mower, a huge smile plastered on his face. I had to hide the keys from him and make him promise he would not drive the tractor to the store. Hugh was anxious. He wanted his independence back. When I mentioned this to friends and family, there were more than a few people who told me quite plainly, “I’d never let him on a bike again as long as he lived. Period!”

Losing one’s independence is devastating, especially when that person had been fiercely independent before. While walking around the block one evening, Hugh told me he didn’t feel like an athlete anymore. I told him, “Oh, yes, you are!  After thirty years of being an athlete, you’re not an athlete because of what you can do, but because of who you are: a team player, someone who never quits, someone who strives to be his personal best. You do all these things, Hugh. You always have.” He thought about this, and I think it helped spur him on, even though I felt conflicted because I was not so sure I wanted to see him attempt to ride a bike or paddle out in the ocean ever again.

Later, he told me he wanted to be the man who never gave up. To this day, I believe Hugh would have died trying to do the things he wanted whether I “allowed” him to or not, and that’s why I chose to support him and, while supporting him, to request some safety measures. This was the best compromise I could manage. Hugh’s desire to participate in potentially dangerous sports again wasn’t about not listening to me, or ignoring the possibility of another injury, or about ego; it was about finding himself again, feeling comfortable in his own skin. At times, I don’t even think it was about succeeding at these things, as long as he didn’t give up the quest.

For caregivers, letting go can be as painful as the injury itself. I had to keep reminding myself that Hugh wasn’t trying to upset me. I also had to come to terms with allowing Hugh to live as full a life as he deserved after so close a call. I have to say, eleven years after, I’m glad I did let go. Hugh chooses surfing over cycling these days, and I can live with that — water provides a softer landing. Besides, holding on too tightly would have risked our relationship, and today our relationship is better than ever.

Here’s to Independence Day, for survivors and caregivers alike. When it’s time to let go, may you hit the ground running toward your own dreams and look back just long enough to appreciate the strides you are making today.

Take a look at this video called “Relationships After TBI: Getting Back on the Bike,” where Hugh talks about getting back on his bike and surfboard after his injury.

I am currently struggling with "letting go". My adult daughter sustained a TBI 2 months ago. She thinks she can return to her former life and it is difficult to determine what she is ready for and what she is not. I fear that if she is given too much independence something terrible will happen! This is harder than the teen years were...
Great article and what a wonderful picture of Hugh! Sarah said that she felt like a "cops wife" long before my TBI.. always wondering if I was going to come home. I'm back on a bike for 25-30 miles a day and I KNOW it causes her anxiety. It's a tough line... that between protecting "what's left" after a TBI and living life to its fullest. Thanks for a GREAT post. ~David
Thank you for your comment, Dawn! Letting go is so hard. I wish you the best at letting go for your husband and also for your own peace of mind. Best of luck! Rosemary
Thank you so much for this blog . I am going through this exact time with my own husband who has a TBI and letting go is really hard. You helped me realize how much he needs me to trust him again . I read your blog every week and look forward to your advice . Thank you, Dawn Dawn