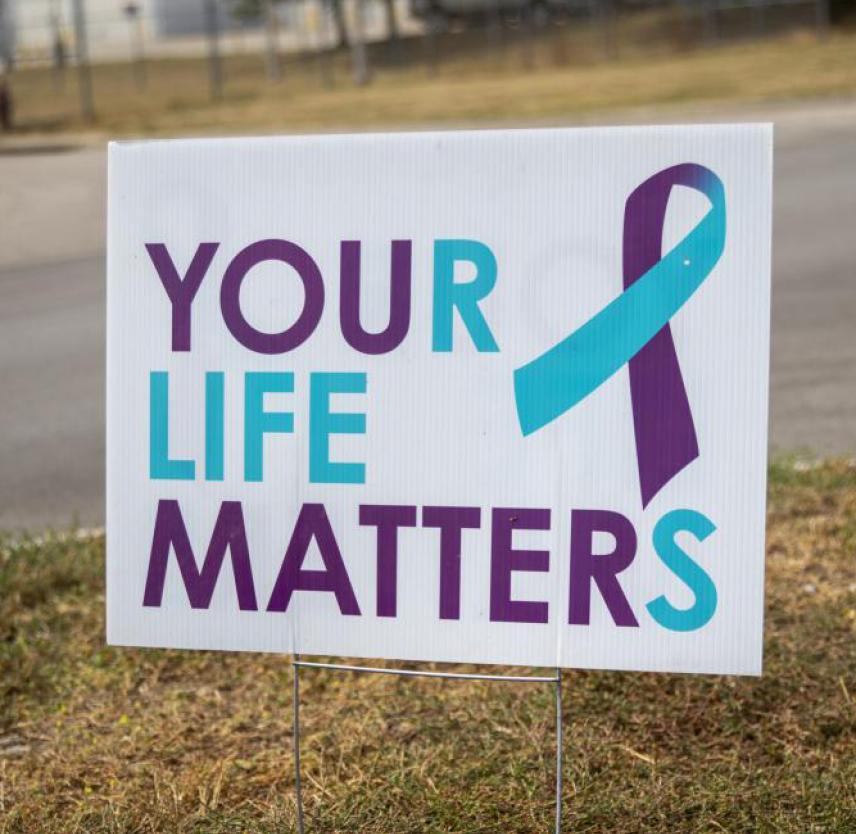 Finding my Motivation, Holiday Edition
The Curse of an Attitude of Gratitude
I Almost Died Giving Birth: How I Process My Maternal Trauma
Suicide Is Not a Bad Word … Don’t Be Afraid to Talk About Suicidal Ideation
Hurting Physically from Emotional Pain

September is Suicide Prevention Awareness Month. If you are military-connected then you know the 22-veterans-a-day average. You’ve seen the blue ribbons plastered everywhere on base/post. If you are a veteran or caregiver, you’ve seen similar posters at the VA. You’ve probably gone to an annual suicide prevention training or two. You know the signs, you know what to look for and what to do if you are worried about someone’s safety. But nothing can truly prepare you for when it happens.

My veteran husband, Russ, and I have lost friends and “battle buddies” to suicide. We have friends who have had close calls. Suicide and suicidal ideations are not foreign to us, especially to anyone who has seen trauma. And I don’t just mean combat. It can happen to anyone. It’s okay to not be okay as long as you don’t act on those thoughts.

Suicidal ideation is not uncommon among caregivers. In the very early days of helping Russ sort through some of the tougher triggered situations, I was not prepared. I didn’t know what was happening. I had never seen him disassociate before and I was scared. Not scared of him, but scared that I could not help him. Honestly, I was panicking, too. After the panic eased and time passed, I started feeling like it was all too much. The Air Force did not train him or me for any of this in all those transitioning-out-of-the-service classes. When it got really bad, I had momentary flashes of thinking about crossing into the opposite lanes of highway traffic. But those thoughts left me as soon as they hit me. I just chalked it up to stress and kept it to myself.

I actually had a conversation with another caregiver the other day about stigma and the pressure surrounding suicide and the fact that there are more caregiver suicides than we know about because it's not something that's researched. Because this friend and I have similar caregiver stressors, we were able to speak openly and frankly, without judgment. She shared with me her attempt at her own life in the midst of heavy caregiving duties. I thanked her for sharing and trusting me with that information (and I did ask her permission to write about it). We both know that talking about suicide helps us process the pain and find where help is needed.

Veterans are especially good at hiding and keeping difficult things to themselves because the military trained them to suck it up, carry it, compartmentalize, and do whatever they need to do to keep on mission and finish the task at hand. They are further trained on all the signs and symptoms of suicide and suicidal ideation so they know what to hide, and how to put on a happy face, or a, “I’m fine, I’m just tired” face. Have you seen Disney’s Encanto? I’m reminded of the song, “We Don’t Talk About Bruno,” about keeping the Madrigal family trauma a secret. And for those who know you the movie, you know how well keeping secrets went for the Madrigal family …

So often we are afraid of what people might think of us that we do everything in our power to hide the truth. This includes more than just difficult feelings, but little things that get left unsaid. All those unspoken truths add up and weigh us down. I was raised Catholic, so much of my tendency to bury “bad” or negative feelings stem from those early lessons of guilt and sin. If you didn’t know, Catholics believe suicide is a sin.

Plus, now we are so afraid to mention the word suicide on social media because our post will be flagged or banned but that is NOT the way to help those experiencing these difficult emotions. This just feeds the stigma and the shame. That just makes us sweep it under the rug, and that helps no one.

So, what can you do? How can you help? What do you say when someone says they are thinking about suicide? It’s pretty simple actually. Just listen. Be there. Practice active listening; it’s not about thinking of the “right” thing to say. Simply listen with intention. Be honest. “I don’t know what to say but I love you,” is a powerful statement. Be kind, not overly cheerful or dismissive. Never say “You don’t want to do that,” or “That’s a sin,” or anything else to cause them shame or discomfort. They already have enough. If anyone shares suicidal thoughts with you then they trust you. You can say, “Thank you for sharing that with me. I am here if you want to talk more about it.” But even that might be too much. If you feel inclined to offer more, you can share resources like 988 (the new number for the suicide prevention hotline) or you can call 988 on behalf of someone else, with their permission. Just be you. You are enough.