I Almost Died Giving Birth: How I Process My Maternal Trauma 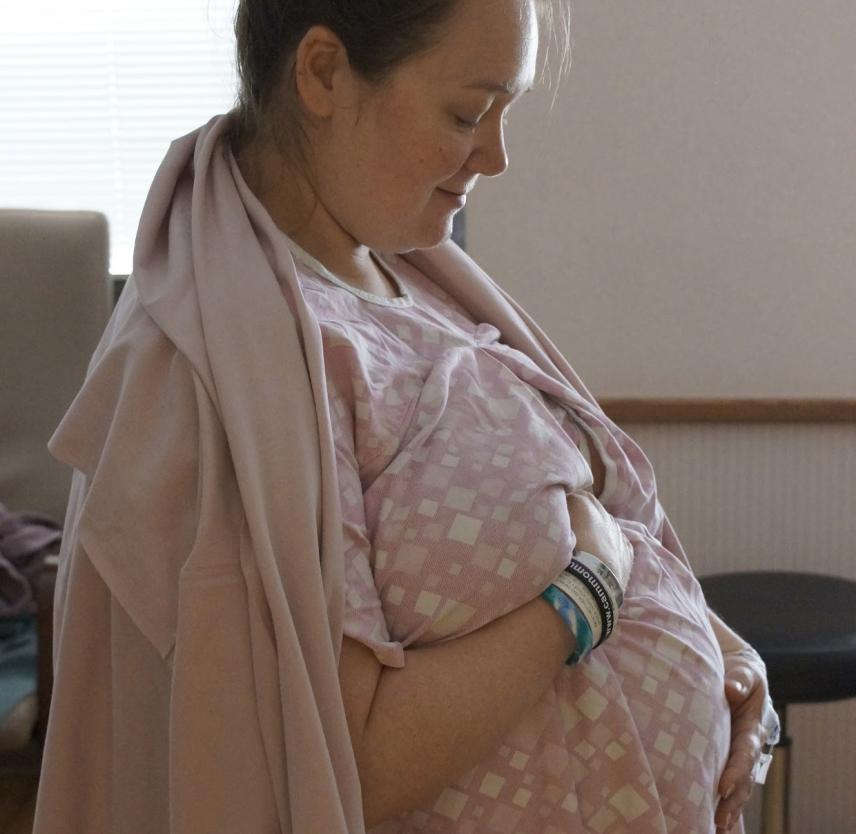 The Curse of an Attitude of Gratitude
I Almost Died Giving Birth: How I Process My Maternal Trauma
Suicide Is Not a Bad Word … Don’t Be Afraid to Talk About Suicidal Ideation
Hurting Physically from Emotional Pain
Building Your Caregiving XP: The Importance of Recharging Your Batteries

I almost died giving birth. I don’t talk about it much because I didn’t die. I am here. Baby just turned 6 and her little sister is 4. They are thick as thieves and their dad and I are over the moon. But I almost died.

I hadn’t been a mom before. I had been a step-parent, with all the joys and difficulties tied to that, but never experienced childbirth. Russ and I had been trying to conceive but I could not carry to term. We had five miscarriages, that we know of, looking back probably more because my cycle was so irregular. I wrote more about this last year. Nine years of trying took its toll on me, physically and mentally. It is exhausting to manage all those hormones and pregnancy symptoms and have nothing to show for it. This was compounded by the fact that we could never get referrals to fertility specialists because his deployment tempo was so frequent. We were told that we have to try for a full year — 12 consecutive months — before we could get a referral. Well, he was never home for 12 months in a row.

It wasn’t until our fifth miscarriage that my recurrent pregnancy losses were noted. We got pregnant, had the blood test to confirm, and heard those first fluttery heartbeats at that first exam weeks later. Russ was elated. I was cautiously optimistic. “No matter what, this one is sticking,” I thought to myself. But it didn’t. At 15 weeks, I started spotting and went straight to the hospital. I waited in pain while they told me there was nothing to be done so early. The nurses were kind and sympathetic, and finally, a female obstetrician took the time to listen to us, looked back at my records, and took us seriously. From then on, we had a medical team on our side.

I credit the obstetrics team at Walter Reed Military Medical Center for my being here today. My pregnancy with my firstborn was “unremarkable,” meaning it was pretty normal other than being “geriatric.” I kid you not, after age 35, all mothers are considered geriatric and high risk. And I was already considered high risk due to all the previous losses. Either way, it meant we got to see the OB more often than most. It is also the only way I discovered my Chiari Malformation (a rare deformation of my skull, leaving a small opening at the top of my spine where my brain falls out and pushes on my spinal cord. This buildup of cerebrospinal fluid (CSF) causes neurological and physical symptoms.) The OB took such good, gentle care of us.

My daughter was so excited to see the world that she decided she was ready two weeks early. One night at about one in the morning I had to use the restroom as is typical when someone is dancing on your bladder. But this time one of the dogs started circling my feet. I just thought she also needed to do her business but she never left my side. I used the facilities but when I stood up there was another rush of fluids. My water broke. I was confused because I had never experienced this and it was too early in the pregnancy. The dog knew before I did that it was showtime.

Since it was two weeks before my due date, we did not have anything packed for the hospital. I gently woke Russ and asked him what we should do. Thanks to years of emergency services training, he groggily but quite quickly packed a bag, laid out towels on the passenger seat of the van, and drove us to Walter Reed. We got checked in and started what would be a 24-hour-long labor. Although my water broke, I wasn’t contracting as fast as they wanted, barely at all, if memory serves. Given my age and previous losses, they recommended Pitocin — a labor-inducing medication. I refused the epidural, even after all of the nurses highly recommended it for pain. I wanted to feel the baby. At any rate, labor intensified and our big baby girl was healthy, deemed full-term, and latched immediately. Even two weeks early, she is still in the 99th percentile for size and weight.

But, as I was riding the high of endorphins and snuggling our sleepy “Peanut,” as we call her, I was still bleeding. More than is normal. The hospital allowed us to rest for a few moments then I was signing advance directives just in case I didn’t make it through emergency surgery. I remember not worrying at all about the baby, but more about how Russ would do on his own. I ended up with that epidural after all. My wishes for a natural birth and post-partum recovery were dashed.

Surgery was a success but healing from it was terrible. Not being able to walk, or even feel my legs, was scary. The pain medications after surgery made me feel awful and made breastfeeding dangerous and difficult. It would be another 12 hours before I was allowed to feed my new daughter and she almost choked. We would eventually find our rhythm but those first few days in the hospital, learning how to “mommy” while healing were tough.

I never really thought about how traumatic my first daughter’s birth was until quite recently. We were building a piece on infant loss and maternal PTSD for BrainLine. Then HBO’s The House of the Dragon went too far with a stillborn birth scene. All of the discussion surrounding our feature story, fictional stories, and articles about October being Pregnancy and Infant Loss Awareness Month triggered me. I was angry all the time. I wanted nothing to do with anyone, especially the girls. And that hurt me more. Logically, I knew I was not being kind but I could not shake the emotions. I apologized when I yelled and tried to plan better to deal with these intense reactions. I spent more time on self-care … just little things I could do at home that I knew would make me feel better:

I didn’t notice much change after each activity. But at the end of the week, after making a conscious effort to care for myself, I did feel better. Every little bit helped. It inspired me to keep going, to make and keep doctor appointments for me, deep clean spaces which have been neglected, get a massage, and plan fun activities or trips.

It’s been a long road and I recognize how lucky we are to have two healthy girls. There are some mommas who never get the chance to carry, whose bodies won’t allow it, some who never get to hug their squishy little pink balls of sunshine. I know the good far outweighs the bad and sometimes emotions get the better of me. But I am still healing and will continue to seek light and joy.