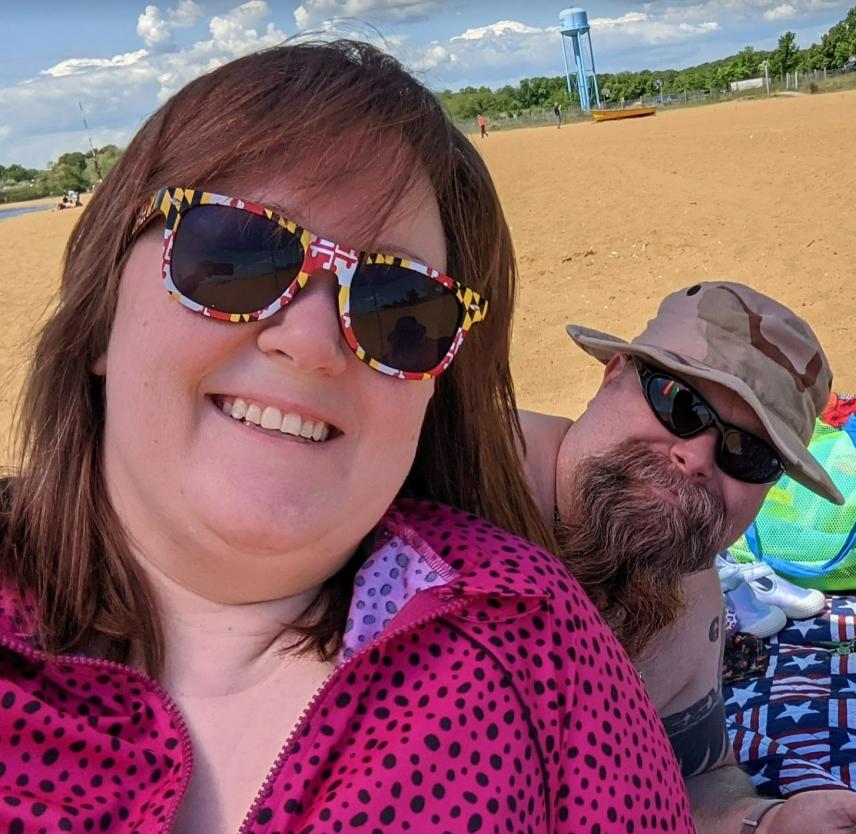 Stacey and Russ at the beach

If music soothes the savage beast, then why is it always heavy metal for PTSD?
Military Appreciation, Mental Health Awareness, PTSD, Trauma, and Me
The Emotional Rollercoaster of Post-traumatic Stress Disorder (PTSD) Medication
March Is Brain Injury Awareness Month, But What Does That Mean?
Self-Care Through Singing: Trauma, Resilience, and Representation in Musicals

May is Military Appreciation Month. It is also Mental Health Awareness Month. Does that make it Military Mental Health Awareness or Appreciation Month? How do military service members and veterans really want to be appreciated? Well, if you ask my husband, it’s more than the free sandwich at Mission BBQ, but that is a nice perk. What it actually is — is time. Time reflecting on your place in society. Time to listen to veterans and their stories. Making time to learn about your country’s history, yes, all the ugly parts, too. Then taking time to make your community a better place. That doesn’t mean you have to run for political office, although feel free if you are so driven, but just help your neighbor. You can’t survive in a vacuum so do what little you can to make your time here better for you and others.

Since starting this job, I have been speaking with veterans and military family members for BrainLine’s Veteran Voices series. Many share the same sentiments. They tell us their stories in an attempt to help anyone who might be experiencing issues with PTSD/TBI. Working with BrainLine has also made me realize just how much trauma occurs both during military service and before. I am not saying everyone who serves has experienced trauma, but many in my veteran circle of friends have, and certainly those I’ve interviewed have had their share of hardships. I have also discovered that many veterans are often reluctant to seek help. Again, I am only speaking from my experience, but so many times veterans do not seek help because they do not think they are “sick enough” or “it is that bad” when they and their families are clearly suffering. My own husband had to be convinced it was okay to speak with someone as he transitioned out of active duty. I am glad he took my advice.

So, all veterans have PTSD, right?

No. Hardly. Veterans have a higher chance of experiencing something traumatic.

But I thought only military veterans can have PTSD.

Nope. Veterans are only a small portion of Americans living with post-traumatic stress disorder. Anyone, no matter their background or profession, can experience trauma. So that means PTSD comes in all shapes as sizes.

Back to my husband … Russ has always been the “helper.” He was a Boy Scout and a volunteer firefighter before joining the military and becoming a cop. That’s one of the things which drew me to him: his desire and mission to be a helper. Plus, he is super cute and a sci-fi nerd so I was pretty smitten from day one. I think I too am a helper, but I often struggle with feeling like I’m not doing enough. Now my days are so full of working, parenting, caregiving, and singing that I rarely have time for myself, let alone volunteering. But I want to. So, I try to make time to help around the community. I have found some wonderful neighbors in my local “Buy Nothing” group and we share resources with each other. It is a small way I feel connected to others.

I have recently learned that this urge — no, this drive to do more for others — can be a trauma response called fawning. Fawning is people-pleasing behavior in order to avoid or diffuse conflict and feel more secure. I have been a people pleaser for very a long time. I haven’t really talked about it before because I didn’t feel I had a right. Despite singing on stage for my other career, I really don’t like talking about myself. This website isn’t about me. But this blog is, so I think it’s time to be honest. I have post-traumatic stress disorder (PTSD). I was raped in college. Prior to that I was harassed and sexually assaulted by so many. I developed early and I did not realize it was more than “just playing,” as they would often say. I know now that every instance was wrong and was actually sexual assault. I had gotten some help for my symptoms before meeting Russ but it wasn’t really until he started seeking treatment for his PTSD that I was able to identify both my triggers and my fawning reactions. I struggle with setting boundaries because I am pulled in so many directions I often don’t realize I’ve said “yes” to too much. I am learning that “no” is not a bad word and that I have a right to say it, although it is often, “no thank you.” There is no reason not to be kind.

It is in these moments of self-reflection that I realize how far I have come. I tell everyone that self-care is not selfish but I rarely did it. I used to say yes to everything at work to the point of burnout. Then my husband retired from the military and we were going to so many appointments, I had no time for much else, including me. Having children made me slow down and reevaluate what takes priority: me and my family. I am so grateful for this job and the opportunity to share my story, especially if I can help someone else in the process.