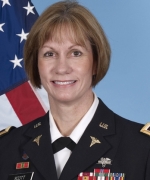 Her medical and military career began more than thirty years ago. Col. Scott initially received her Registered Nursing Diploma from Christ Hospital School of Nursing, Cincinnati, Ohio in 1978 and her Bachelor of Arts in Molecular Biology from University of Colorado, Boulder, Colorado in 1981. She attended Case Western Reserve School of Medicine 1981-1985, followed by Surgical Internship, with direct accession into the US Army at that time.

Following three years of Neurosurgery Residency at the University of Western Ontario, Canada, she completed a two year tour in Panama as a General Medical Officer. She completed Neurology Residency at Walter Reed Army Medical Center 1996 and Neuro-Ophthalmology Fellowship 1997, Board-Certification in Psychiatry and Neurology 1997, and maintenance of certification in 2007.

Col. Scott has been on staff at Madigan Army Medical Center since August 1998, serving in multiple leadership positions and has been active in resident education. She served as Neurology Clinic chief, assistant chief of Department of Medicine, assistant chief Neurology, and chief, Neurology Service since June 2005. Col. Scott deployed to Afghanistan October 2010 to April 2011 where she served as the Theater Neurology Consultant with Task Force 62nd Medical Battalion, where she was instrumental in advancing concussion care throughout theater.