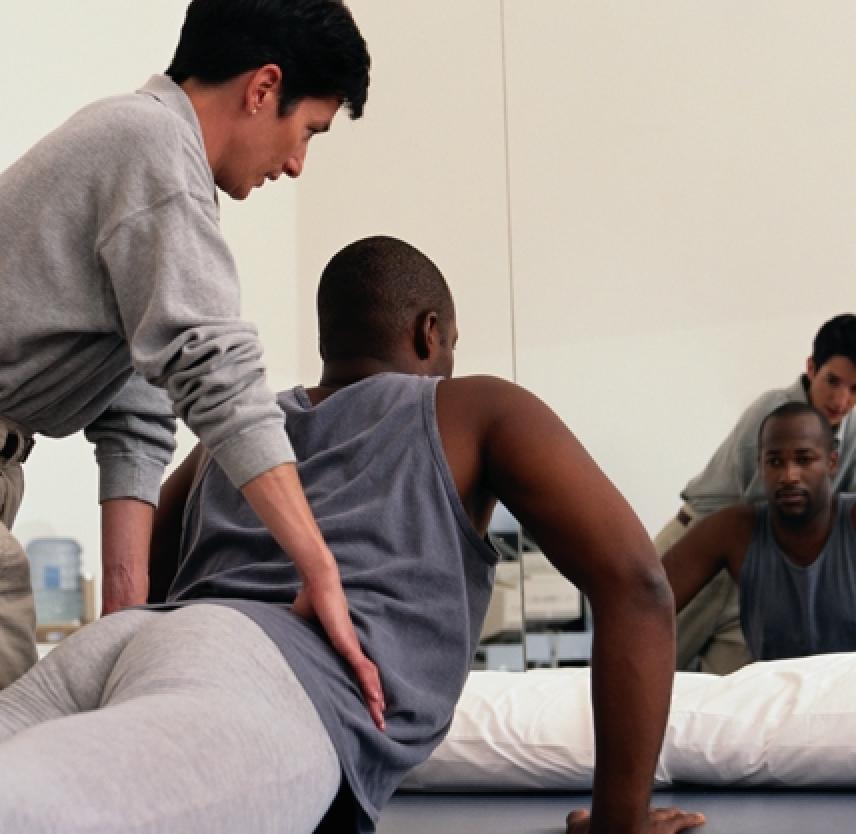 The Traumatic Brain Injury section of the physical therapy department at Walter Reed Army Medical Center enables patients to take the next step toward success — beginning where many rehabilitation programs end.

The special unit formed last June, provides intense, specialized therapy, as well as one-on-one attention for both inpatients and outpatients with TBI and other neurological injuries. Since its inception, the section has treated more than 800 patients with daily, rigorous workouts, several times a day for some. The program combines high-tech equipment and a creative team of health-care providers with special training to treat patients with TBI.

“Typically, the moderate and severe brain injured patients who may have started here at Walter Reed in the acute program, go on to one of the veterans Administration sites for rehabilitation, and then come back to Walter Reed,” explained Capt. Karen Lambert, an activated reservist who heads the special unit.

The physical therapist said the section’s patients are generally active duty service members who return to WRAMC to complete the medical board process or hope to return to duty. Some return from large, rehabilitation facilities in the civilian sector specializing in brain injury. Most returning patients continue to have issues with motor control.

“In the civilian model of rehab, after severe injury, insurance cuts off after so long, and we say that patient “plateaus” — we assume that they’re not going to get any better,” Lambert explained. “Six-months to a year after a neurologic injury, the assumption is you’re as good as you’re going to get.”

Lambert said she and her team of five physical therapists and three PT assistants discovered that these patients, some two years post-injury, make qualitative gains in their function: refined motor control, improved gait and compensate correctly for their motor deficits. Their walk is smooth; they take less effort to walk and strain their joints less, which helps them avoid joint surgery down the road.

“People tend to trail off a little bit if they’re not getting continued rehab, but they certainly don’t get better beyond there without intense rehab,” Lambert said.

Three years ago while on patrol in Baghdad, Horan sustained a penetrating brain injury after a gunshot to the left side of his head. He lost his ability to walk, write, speak and sustained visual impairment.

“He came in a wheelchair, and now walks everywhere,” said Capt. Jennifer Hundt, a PT in the TBI section, who helps Horan ambulate and access public transportation with a service dog to increase his independence.

Hundt, a reservist with the 852nd Medical Detachment in Vancouver, Wash., said Horan wears a neuroprosthesis on his right leg to stimulate the muscle in his shin to raise his foot so he won’t have to wear a plastic brace. A heel switch works as a wireless trigger that sets off the stimulation when his leg is lifted for swing through. The neuromuscular electrical stimulation prevents him from tripping over his own foot.

“He’s getting two, almost three times what he was getting in the civilian sector,” Lambert said, who explained the section teams up with the Gait Lab and other specialties housed at the Military Advanced Treatment Center, to corroborate, “fine-tune,” measure progress and set goals.

Horan said he could walk a little when he first arrived at Walter Reed. He walked very slow but knew his body worked despite his brain injury, so he requested physical therapy five times a week or more, a departure from conventional therapy. With the support of their commander, Lambert and her team rearranged their schedules to accommodate the Soldier. Their efforts evolved into the TBI physical therapy section.

The new unit made it easier for TBI patients to schedule their PT appointments since many regularly see other multiple specialties such as speech, neurology and occupational therapy as well.

“Our patients who have these multiple service needs had a hard time getting their PT appointments in [or] recalling their appointments if they were always scheduled at a different time, with a different provider,” Lambert said. “We wanted to give them more consistency, and we wanted to have a dedicated team that had a skill set specific to this diagnosis.”

Hundt explained that patients with TBI and other neurological injuries need a lot of cueing, feedback, hands-on and physical assistance. The new unit uses a treatment model that lessens the demand on the rest of the clinic, maximizing resources and time by scheduling TBI patients at the same time each day, providing them with both peer-support and special, focused-care.

Patients with mild traumatic brain injury often complain of balance deficits, often attributed to the vestibular system, or inner ear balance, because of their inability to fully integrate the “signals” they receive from their sensory systems. Patients with more severe traumatic brain injury, which affects the part of their brain that controls movement related to one or both sides of their body, find sitting, standing, walking and balancing themselves a challenge.

n some TBI patients, nerve and muscle are fine, but the patient can’t generate the message in the brain to move them, so the entire TBI team works together for the hands-on approach. At least three staffers assist with body weight support locomotor training for a patient unable to support his own body weight on a treadmill: one person assigned to advance his right leg, a second to move his left and a third to stabilize his trunk.

Hundt said you have to push the nervous system with a lot of intensity and repetition to facilitate recovery of function.

The team took a five-minute break after manually moving one patient’s legs on a treadmill. Hundt said manually moving limbs to retrain muscles is very labor intensive, especially for the TBI physical therapy team as well as the patient. “That’s why we really need to work as a team so much over here…we get our own over-use injuries as well, and then we have to know when it’s time to tap out, and let another clinician switch in,” she explained.

The TBI physical therapy section is a labor of love for Hundt, Lambert and the rest of the team described as passionate and committed. Both reservists volunteered to extend their period of active duty to build the new program. Hundt will lead the section after Lambert leaves the unit next month.

Lambert said patients like Sgt. 1st Class Jarrod Taylor inspire her. Taylor said he had to learn to walk all over again like a toddler after he was ejected from his vehicle in an interstate highway traffic accident.

Taylor returned to active duty with the XVIII Airborne Corps at Fort Bragg, N.C., after therapy with the TBI physical therapy section at Walter Reed. He recently exceeded the minimum standard for the Army physical fitness test, and said Lambert and the TBI team was instrumental to his recovery.

“I think the program would be a great program to implement at other locations,” Taylor said. “I know that other Soldiers in other places can benefit from this program.”

“Our mission is to set the gold standard in rehabilitation of wounded warriors with neurologic injury,” Hundt said.

Very relevant information. I agree that a personal injury can cause the victim and the family serious devastation. Traumatic brain injuries can be caused by a variety of different mechanisms. Most frequently, they are caused by a blow to the head (e.g., striking your head on a solid object) or by acceleration/deceleration forces (e.g., a whiplash injury).

Any organization that is looking to hire transitioning Veterans and people with hidden, physical and combat related disabilities should consider the â€œPreparing Employers to Reintegrate Combat Exposed Veterans with Disabilitiesâ€ (PERCEVD) diversity training program by DESTIN Enterprises, LLC. Employers, colleges and universities should better understand and address issues like PTSD, TBI, suicide, hidden disabilities, depression, substance abuse and other cultural challenges. Eight out of ten people have a subjective understanding regarding the medical conditions, symptoms and the affects of (often prescribed) anxiety, pain and sleeping medications. Although most employers are altruistic about hiring veterans, many may inadvertently exacerbate conditions by exposing them to potential PTSD trigger issues. Returning veterans are currently experiencing high unemployment conditions and increasing high employment attrition rates. They need all of the sensitivity, patience and support that we can give as they return from the longest war in US history. PERCEVD diversity training raises disability awareness and provides best practice instruction on innovative accommodations, proactive intervention, recruitment and retention strategies. The training emphasizes the business case for diversity and instructs employers on issues such as disability etiquette, hazardous environmental and structural issues, ADA and USERRA compliance and the importance of proper diet, rest and exercise and its impact on readiness. PERCEVD also helps to bridge the gap between military paradigms and corporate culture. The training was created and designed by Veterans, diversity subject matter experts and OIF veteran and board-certified psychiatrist Cynthia Washington, M.D. For more information visit: www.destin-e.net.