“Just Breathe”: The Many Ways the LoveYourBrain Foundation Connects, Educates, and Empowers the Brain Injury Community

Related Content:
Yoga
Marty Yura: Try Yoga and See What Happens
Ask the Expert - Brian Klassen, PhD: How Can Meditation and Yoga Help with My PTSD?

In one of Kevin Pearce’s hundreds of doctor appointments, he was talking about how frustrated he was, how clumsy and forgetful he felt. A professional snowboarder, Kevin had sustained a life-threatening traumatic brain injury while training for the 2010 Vancouver Winter Olympics. Pondering Kevin’s comments, the doctor looked him in the eye and told him that saying unkind things to and about yourself actually harms your brain. Five years later, in 2014, from that one comment, LoveYourBrain Foundation was founded by Kevin and his brother Adam Pearce. And in the last eight years, it has helped countless people with TBI, their caregivers, and professionals in the field build community and cultivate resilience.

Watch “The Crash Reel,” a documentary by Lucy Walker about Kevin’s remarkable healing journey and the power of family and community here.

Living with a brain injury can feel incredibly lonely. Sometimes people mourn their “old” selves and the things that they can no longer do or be. Sometimes they feel misunderstood, uncertain, stuck, invisible. Their caregivers can often experience similar feelings. Being with others who have had similar experiences can be a veritable lifeboat. That is what LoveYourBrain is all about.

“We are passionate about improving the quality of life of people affected by TBI through community, yoga, and mindfulness,” says LoveYourBrain’s Senior Director of Programs, Research Scientist Kyla Pearce, MPH, PhD, CBIS, E-RYT. “Our programs are intentionally designed around what Kevin discovered in his own healing journey — that the practices of yoga and mindfulness, which blend awareness and compassion, can be powerful tools for self-empowerment and for finding the resilience that exists within us all.”

Developed to address and support the “whole person” with TBI as well as their caregivers who play an essential role in healing, LoveYourBrain offers three main programs as well as a resource library of TBI-friendly meditation and yoga classes and brain health tips. Everything is free to ensure equity in access, and, by design, their programs offer people with TBI and their caregivers a place to show up, a place to feel worthy.

LoveYourBrain’s inaugural program, the Retreat Program was, first and foremost, designed to dismantle isolation and build community connection. Now held six times a year in beautiful lake and mountain regions of Maine and Colorado, each five-day retreat is a holistic immersion into mindfulness, brain health nutrition, and community support — all developed for the needs of people with TBI and their caregivers.

“The five days are tremendously powerful. There can be lots of grief and strong emotions, but more importantly, there is a renewed sense of possibility that can only happen in community,” says Kyla. “There is a huge demand for our retreats because they offer people with TBI and their caregivers the opportunity to step beyond the challenges of their day-to-day lives to feel seen and valued.” Staffed by yoga instructors, nutrition/brain health team members, and art therapy experts, the retreats focus on LoveYourBrain’s core pillars: community, mindfulness, movement, and nutrition to promote personal growth and healing.

Co-Founder Adam Pearce often opens a retreat by sharing his story of being hands-on during Kevin’s day-to-day rehabilitation post-injury. “I am always awed by Adam’s ability to be vulnerable and to share himself with the groups that come to LoveYourBrain,” says Kyla who is married to Adam. “He often cries when he talks about the joys and difficulties of Kevin’s healing journey— their whole family’s journey of healing. I believe it is from this vulnerability and authenticity that others then feel safer to lean into their own vulnerability, and find their inner strength even amidst their challenges.”

The Yoga Program launched in 2015 after LoveYourBrain connected with Dartmouth College on a pilot study to look at the science that shows the benefits of yoga and mindfulness meditation for TBI rehabilitation, including psychosocial, cognitive, and physical improvements.

For this initiative, LoveYourBrain partners with studios in the United States and Canada to offer six-week yoga and meditation programs for people with TBI and their caregivers. Following the programs, the partner studios commit to offering at least one class per week that is accessible for people with TBI, taught by a LoveYourBrain-trained instructor (though this varies currently due to COVID).

LoveYourBrain also offers comprehensive trainings to equip clinicians and yoga teachers with tools and confidence in how to tailor yoga and meditation to the TBI community. That’s the organization’s way of shifting the culture around brain health after TBI … by supporting a new healthcare workforce to develop the skills to better serve their patients and also for their own self-care.

“We see people flourish during our yoga programs. We see self-awareness and self-acceptance grow and resistance fall away. We intentionally designed the program based on the science of resilience to equip people with tools for how to move through and find meaning and purpose in adversity,” says Kyla who recently finished her post-doc at Dartmouth, examining the effectiveness of yoga-based programs for people with neurological deficits. “The hope is that the work we are doing at LoveYourBrain plus the burgeoning research will help establish yoga and meditation as viable therapeutic interventions in the continuum of care after TBI. We also hope our research will expand access to and understanding of yoga’s benefits to other populations such as to people with multiple sclerosis,” she says. “We recently published the largest study on yoga and TBI to date — a two-year effort that included more than 1,800 subjects in 18 US states and three Canadian provinces — that outlines how yoga can help improve cognition, positive affect, quality of life, and resilience in people with TBI.”

Each class in the program includes gentle yoga to improve strength and balance, meditation and breathing exercises to reduce stress, and group discussions to build resilience and community connection. “The joy and validation people find in coming together to breathe, move, and share their experiences is oftentimes palpable,” she says, “especially because, for many of our participants, this is the first time they’ve ever been in a community space with others impacted by TBI.” 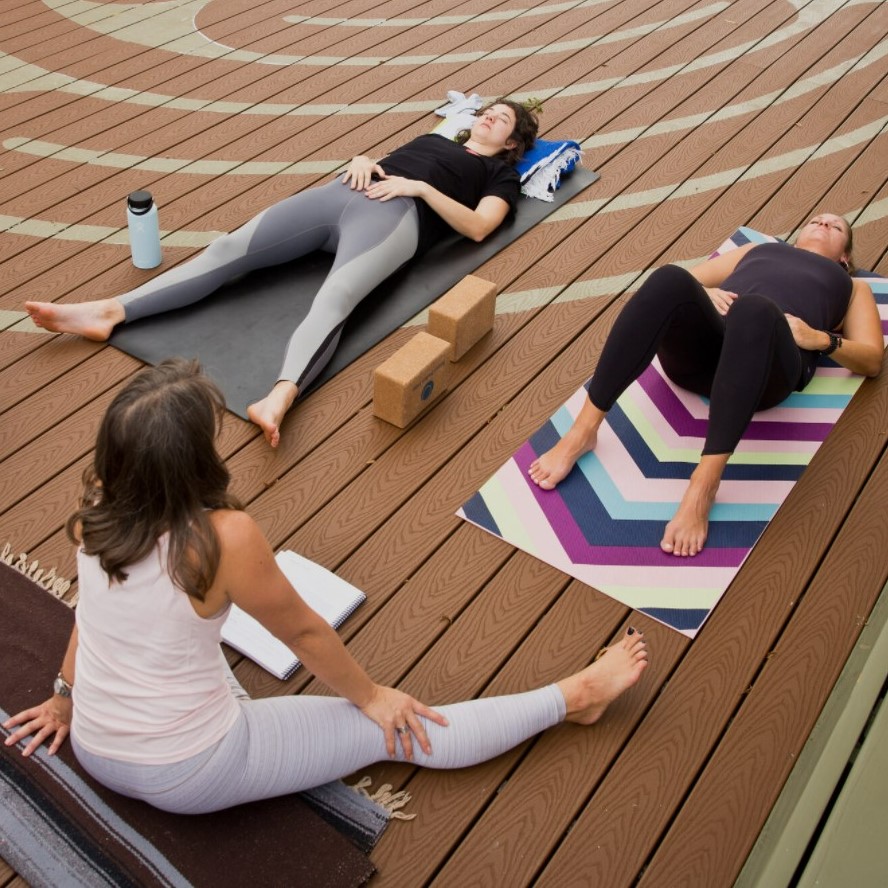 The Mindset Online Program was developed in response to the pandemic as a way to ensure people with TBI and their caregivers could continue to access the benefits of community, yoga, and mindfulness programs from their homes. “I was definitely skeptical about offering an online program given the realities of screen sensitivity for many people with TBI. And, I had witnessed time and time again how powerful it was for our attendees to feed off each other’s energy and that of the staff in class,” says Kyla. “But I was consistently proven wrong. Even in an online space, we’ve found people can find a great sense of connection and belonging; they want to show up for each other. Online as well as in person, our programs help people foster a sense of trust in themselves and in their group that helps them heal individually and collectively.”

“When a person feels safe enough with a group, vulnerability makes way for learning and growth,” says Kyla. “I think great wisdom can arise in a group process because that’s where people can examine their assumptions and broaden their perspective based on others’ lived experience. There is no pill for community, so we have to create spaces where people can come together to feel a sense of belonging, support, and connection. These spaces are so often unavailable for people with TBI, which is what our work is rooted in changing.”

Watch “LoveYourBrain Foundation: Meet Lauren T., an Excerpt from ‘A Personal Experience of Living with TBI’” to better understand the power of the LoveYourBrain programs here.

One story of many

Adam Pearce’s email signature includes this quote from psychiatrist and writer Viktor E. Frankl: “Between stimulus and response there is space. In that space is our power to choose our response. In our response lies our growth and our freedom.”

One young woman with TBI and PTSD who attended a LoveYourBrain Yoga program at a partner studio in New Hampshire exemplifies Frankl’s words. “This student came consistently to class with her service dog. She struggled with the belief that she didn’t ‘fit in’ anywhere, and would sometimes leave class midway through because of her anxiety,” says Kyla. “In a discussion at the end of one class, the group wondered why she left early, interpreting her actions as her trusting herself enough to do what she needed to do to take care of herself in that moment. Hearing the group’s validation the next time she came to class changed everything for her. She, in fact, had felt as if she had failed because she needed to leave early to cope with her anxiety. Hearing that the group valued her choice helped her reframe her decision, so that it represented agency and self-care. From there, she learned new tools to help her breathe and ground herself when feeling overwhelmed from her symptoms of TBI and PTSD. It was deeply moving seeing her develop a greater sense of belonging and self-worth.”

Like Kevin, this young woman learned that being kind, accepting, and patient with herself, especially in the depth of struggles, instead of focusing on the negative was one of the most healing actions she could take.

Visit loveyourbrain.com to learn more about their mission and sign up for their free programs. And click here for an overview of all of the LoveYourBrain Programs.