The Healing Power of Adaptive Sports for People with TBI, PTSD, Spinal Cord Injury, and Other Challenges 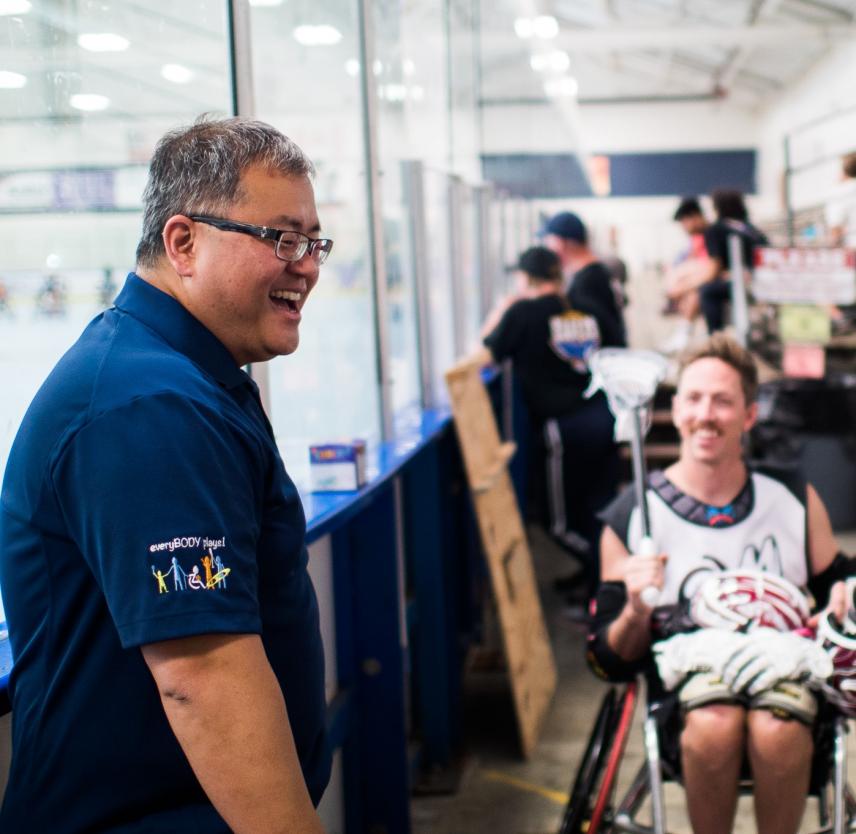 “My ability is stronger than my disability …”

For a good number of people who buy the Kenneth Lee Hero t-shirt from Oscar Mike Apparel, they don’t realize until the shirt is inside out from the dryer or tossed off onto a chair that Dr. Lee’s story is printed on the inside. Until they read it, they don’t know that Kenneth Lee, MD, COL(RET), chief of Spinal Cord Injury Division at Zablocki VA Medical Center, Milwaukee, WI and associate professor, Department of Physical Medicine and Rehabilitation at the Medical College of Wisconsin sustained multiple shrapnel wounds, a traumatic brain injury, and severe nerve damage when his convoy was ambushed by a suicide bomber in Baghdad on September 12, 2004. They don’t know that he struggled with his injuries, depression, and debilitating mood swings for many years, making work and family life all but unsustainable. And they don’t know that adaptive sports saved him, and because of his involvement, have saved countless others with brain injury, PTSD, and/or spinal cord injury. We don’t always know a person’s story.

What are adaptive sports?

Adaptive sports are similar to typical sports, such as basketball, biking, softball, tennis, skiing, kayaking, and more. They are adapted for people with disabilities, allowing many more people to participate with increased independence, comfort, and confidence. Sometimes special equipment is needed to make participation possible, such as sit-skis that allow athletes to sit rather than stand when they ski or specially designed wheelchairs for sports like basketball, rugby, or lacrosse. These sports can be purely recreational or highly competitive.

Most importantly, they connect people who may feel alone or isolated after a life-changing injury. They help people create a new version of life for themselves.

“It wasn’t until about two years after my return home from rehabilitation that my then-8-year-old daughter said, ‘Dad, you don’t smile anymore,’” says Dr. Lee, the once gregarious extrovert who after his injuries felt like a stranger in his body, his mind — in his own life. “How could a rehab doctor like myself have all of these physical and emotional problems and still help my patients?” His daughter’s comment pushed him to start therapy to better accept his TBI and PTSD, and to find ways to live with his chronic pain. And because of his involvement organizing adaptive sports for his patients before his 2004 injury, he started participating himself and from there has become an adaptive sports mentor to countless others. As a result of his own experience, he has really pushed for adaptive sports to become an integral part of rehabilitation programs throughout the VA — and in the community.

“Adaptive sports get people out of the ruts they're in — no matter the nature of their injury,” he says. “They open up doors for people who thought their lives were ruined. Once they get into adaptive sports, they realize they can do a lot more than they thought.”

Many of Dr. Lee’s patients claim that not only did adaptive sports help them go through rehabilitation, but also saved their lives. 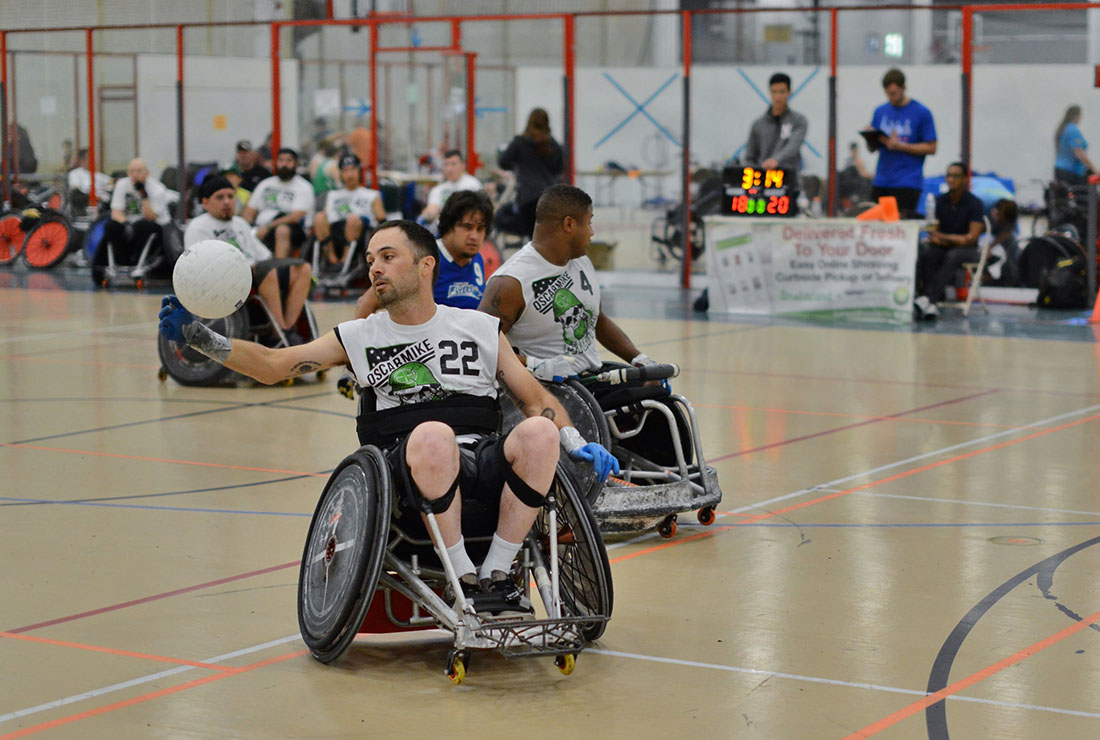 Like Dr. Lee, Noah Currier, who founded the Oscar Mike Foundation and Apparel Company in 2011, also has a story of a life transformed. A Marine who survived intense daily firefights while serving in Operation Iraqi Freedom, Mr. Currier almost died in a car crash near the gates of Camp Pendleton after his friend fell asleep behind the wheel. He broke his neck; the doctors told him he would be a quadriplegic for the rest of his life. Home after rehab, Mr. Currier found himself falling deeper into darkness only to fall deeper still when his fiancée, “his first girlfriend, his first love, his first everything,” died in a car crash. Losing his will to live, he drank, took drugs, and each night, positioned a rifle toward his head. For two years a friend kept telling him about adaptive sports. For two years, he said no. Until one day.

“I was at a point where if I didn’t do something, it would not end well. I felt as if my life had ended; I couldn’t do what made me feel alive. I was a Marine, an athlete, an adrenaline junkie. I’d look in the mirror and I’d no longer see that person,” he says. “I’m not sure why I said yes that day ...”

But he did, and up on the mountain, strapped into an adaptive ski sled, he asked his instructors to give him a minute. “It was as if I could see the whole planet from that summit in Aspen, Colorado … It was the highest place I had ever been. I wasn’t sure how I would get down, but I felt the challenge, I felt my adrenaline rolling again … and flying down the slope that day, I found that piece of me that had been missing for so long. Everything changed.”

Feeling alive again, Mr. Currier’s confidence started to reemerge as did his ability to take risks. He started to say yes to more. He enrolled in college classes, skydived, and got involved in other adaptive sports. Best of all, he found a community of others who had traversed their own landscapes of darkness — whether from injuries, combat, losses of loved ones, or survivor’s guilt. He was no longer alone. In fact, he had a new purpose.,

“I found that piece of me that had been missing for so long.”
—    Noah Currier, founder, Oscar Mike Foundation and Apparel Company 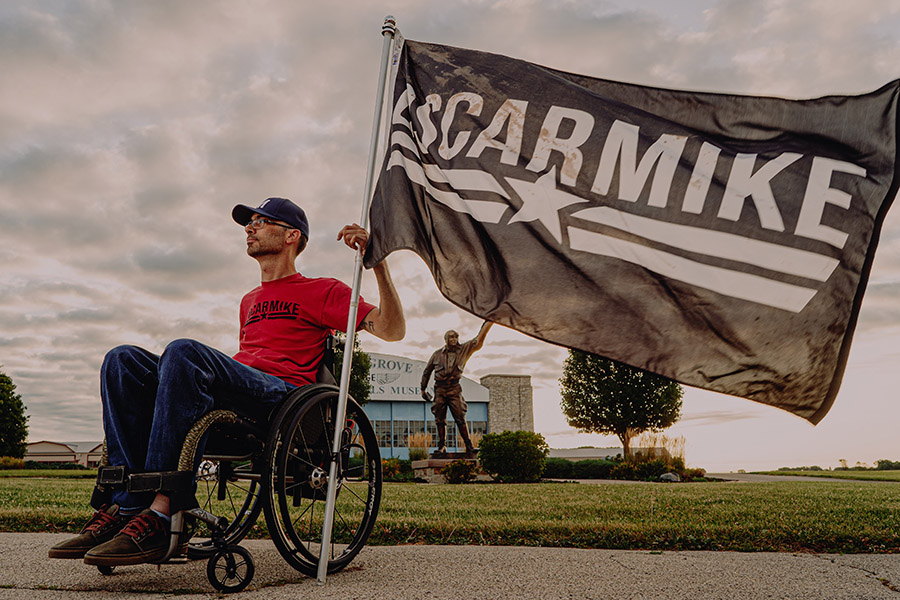 After participating in the National Wheelchair Games, he got talking with some of the other athletes. They realized that because of the high cost of participating in adaptive sports events — from travel and lodging to equipment and possible caregiving — most of them would logistically not make it to more than one or two events a year, if that. “Obviously, there was a need. We all wanted to participate in these competitions and games for fun and physical and mental health, but more importantly, for the community. For us, adaptive sports were life-changing, life-saving,” says Mr. Currier. “So, later that year, with $100 and the space of my two-car garage, a small group of us filed for a 501(c)(3) public non-profit for what would become the Oscar Mike Foundation and, to hasten the process of fundraising, we also created the small business, Oscar Apparel. Now, we utilize 100 percent of donations to the Oscar Mike Foundation and proceeds from our Oscar Mike Apparel sales to provide support to injured veterans looking for an opportunity to stay active and connected.”

“There are so many benefits to being active when recovering from a brain injury. Not only do adaptive sports, like most physical activities, increase the flow of oxygen to the brain, but they also help people with TBI build skills around focus, sequential memory, and multitasking.”
—    Summer Ibarra, PhD, ABPP-RP, HSPP, a licensed clinical psychologist who specializes in adult clinical neuropsychology with board certification in Rehabilitation Psychology.

A former Navy engineer on hydraulic systems, James Veltri was shot in the back after breaking up a bar fight and became paralyzed. While in rehab, his bed sores became severely infected, which led to surgeries, five more months in bed, and an opioid and heroin addiction. He spiraled for several years. It wasn’t until he met Dr. Lee while inpatient at Zablocki VA Medical Center that Mr. Veltri slowly started to reinvent myself.

“Dr. Lee helped get me a bike and a friend I had made in the hospital and I started training and participating in triathlons. We also got involved in Dr. Lee’s Milwaukee Eagles Wheelchair Lacrosse Team,” he says. “Being physically active again, setting and meeting goals, and being part of a community changed everything for me. Ironically, what happened to me has made me a better person. I no longer take life for granted. And frankly, I can’t really enjoy my life if I don’t include others in my thoughts and actions. I’m not sure I would have become the person I am now if I hadn’t gone through what I have.”

“Recreation therapy really is essential to getting service members and veterans out into the community and reintegrating them into socialization again. Adaptive sports are integral in combining the physical and mental aspects of healing.”
—    Acting Chief of Audiology and Speech, Washington, DC VA Medical Center Pamela Harman, MD 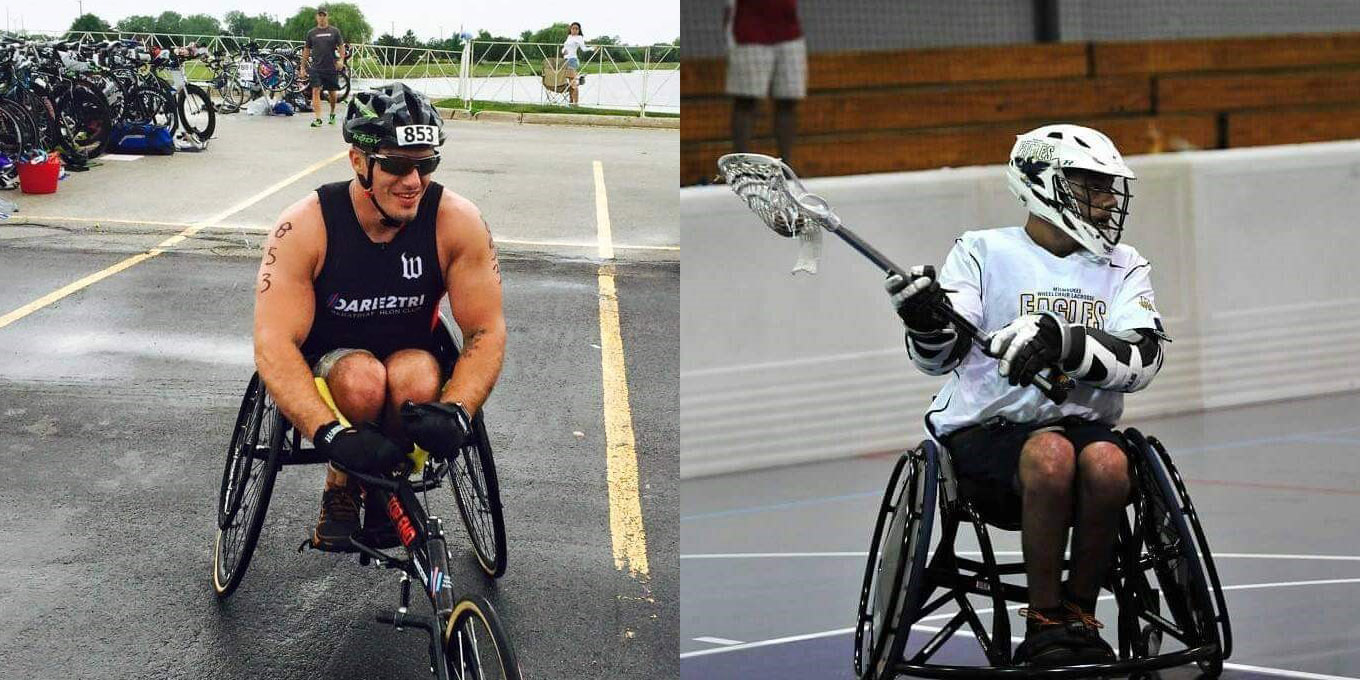 Mr. Veltri holds several international rankings in triathlon and is now at the University of Wisconsin-Milwaukee, working toward a degree in Materials Science and Engineering.

On the Oscar Mike Compound — a 9,000 square-foot center in Poplar Grove, Illinois that includes 17 beds, an adaptive weight-training room, and myriad opportunities for outdoor sports — Mr. Currier and his staff hold free, week-long adaptive sports clinics for injured veterans. The days are packed with sky diving, horseback riding, off roading, swimming, running, kayaking, even a flight lesson in a small plane. The week culminates in a mini triathlon based on each guest’s disabilities and interests.

Because there continue to be long waiting lists for the Oscar Mike retreats, Mr. Currier is launching the first Colorado Clinic with adaptive sports opportunities this summer and is raising money to build another home base in Illinois with 48 beds plus facilities for indoor and outdoor adaptive sports. “I wish we could help everyone …” says Mr. Currier who admits that back in his room those nights with his rifle, he could never have imagined what his life has become. And it all started with a quiet yes to adaptive sports.

“When I meet people, post-injury who may be stuck in a dark place, who may think their lives are destroyed, I say it’s going to be hard to picture the future but start by dipping your toes into the waters of adaptive sports in a group setting,” he says. “The sooner you get involved, the better. You don’t have a clue what you will accomplish in life.” 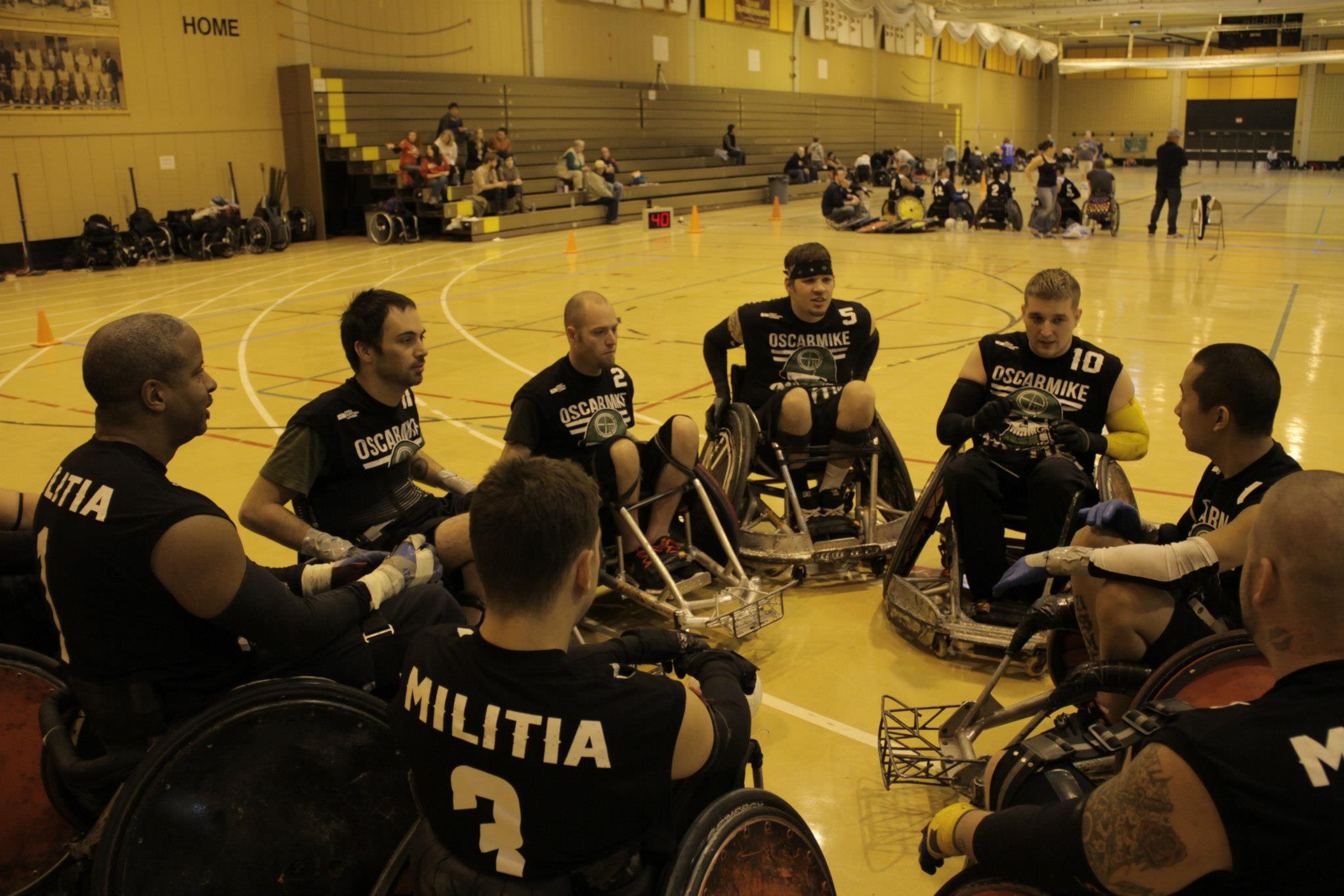