What Is the TBI Model Systems' Resilience Adjustment Inventory?

Dr. Herman Lukow talks about the importance of studying resilience and the myriad tools to strengthen it in people with brain injury.

[Dr. Herman Lukow II] At the VCU TBI Model Systems, we're right now running a couple of studies. One of them is the Resilience Adjustment Inventory—the RAI. When working with people to develop their resilience, there haven't been any interventions specifically constructed to promote resilience in the traumatic brain injury community. That's what this study is—the RAI—that we're doing right now. Again, we use structured guides, quizzes, to structure our processing and our conversation, to identify areas of interest. And we deal with all the resilient qualities in those seven sessions. The positive outlook, the changing definitions of success, problem solving, communications, identifying emotions, communicating emotions, maintaining a positive action-oriented approach. I can't say that I ever see these big "aha" moments. In-session, right then, right there—like "ahh." But more often than not, we can at least get someone to identify, "Well, this is something I haven't tried before," and validate—support them in that—empower them. Okay. "That would be a great thing for you to use to overcome that hurdle that you identified." It's usually a week later—not everyone—but many people come back and they'll report— "You know, that exercise we did—that format for problem solving—how we listed everything out and then we prioritized them. That thing works great! I love it! I've been using it." Or a little thing like writing things down, "I've been writing things down, and it's working wonderfully!" Right now, we're also running a couples intervention—therapeutic couples intervention. Although they're not specifically aimed at building resilience, they address many of the same components—communication, problem solving, defining and clarifying goals. Right, so although that's not the exact intent, there's still elements in each of those programs. Yeah. It would make a logical—next step would be to design something to specifically promote resilience.
Posted on BrainLine September 18, 2013.

Herman R. Lukow II, PhD, NCC is a postdoctoral fellow in the Department of Physical Medicine and Rehabilitation at VCU Medical Center.  He also provides counseling and psychotherapy to individuals, couples, and families coping with the effects of brain injury. 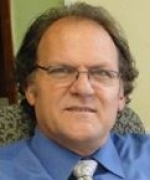