Creating individualized treatment plans for veterans is crucial as they may be experiencing symptoms from PTSD, TBI or other concussive injuries as well as moral injury. Often, soldiers enter a war in their late teens or early 20s when their brain has not yet reached full maturation. Providers must consider all of a veteran’s physical and psychological factors when tailoring treatment strategies.

For information about treatments for PTSD please visit The Treatment Hub.

There is something different about treating veterans with post-traumatic stress disorder, as opposed to civilians. Often the veterans have, in combination with PTSD, is that they may have had other traumatic brain injury such as concussive injuries from explosives, from repeated explosives, loud noises, just the reverberation of big guns and such. And even if you’re shooting a high-powered firearm, and you have it in your shoulder, you know, there is this kickback that weapon has. And those, over time, can contribute to a picture of traumatic brain injury. It’s not as overt as a concussive event with loss of consciousness, but certainly there’s a cumulative effect of that. And so, with veterans that comes into play, traumatic brain injury, one needs to be mindful of that and the sorts of physiologic injury that can occur with these repeated events. There’s another issue, I think, with veterans coming home from war, that contributes to their post-traumatic stress syndrome and that’s the issue of reengaging a normal life after you’ve been taught to be a warrior and to do things that one does not learn in high school and college and normal life. Our parents don’t teach us how to blow things up or shoot guns or defend ourselves or go off and to kill others as soldiers are taught to do. And so there is the issue of moral injury in many of the vets who come home and that’s a tough one and it’s often a tragic one. In some areas where the moral injury contributes to the suicide rate that we see in veterans as well, and the inability to reengage in life outside of the military is, it’s a multi-factorial sort of thing, treating vets with PTSD. It’s not as simple as somebody who’s been in an auto accident and just can’t rest their brain and it becomes a little bit more complicated than the complex PTSDs that we see. There is the differentiation from the post-traumatic stress disorder when there is an event where, especially where one’s life is threatened or one sees life being taken, and the kind of post-traumatic stress disorder that accrues over time with early life adversity as a child or adolescent in an abusive environment. It’s a different type of PTSD, often with depressive symptoms in that case. For veterans, it’s a time-limited experience, but it’s life-changing. When young people go into the military, they go in in their late teens, early twenties, right, when they enlist. So the brain actually has not completed its final maturation at this age, right, and adversity and different types of events can actually change the final state of the brain for adulthood. And so, again, that’s something else to be mindful of in terms of the patient population that we treat, as to what age did they enter the military? What was their brain like before going into the military? What’s it like now? How much of a change is there? And these are all things that come into play when we individualize someone’s treatment plan, whether we’re going to address physical injury, and that’s like a TVI where there’s been bruising of the brain, or your axonal shearing, things like that. It comes into play when designing a psychotherapeutic intervention, whether we need to address pre-military events, or do we stick with the things that happened while in uniform. BrainLine is powered in part by Wounded Warrior Project to honor and empower post-9/11 injured service members, veterans, and their families.

Robert Shulman, MD is the Director of Road Home Program and currently acting chair of the Department of Psychiatry and Behavioral Sciences at Rush University Medical Center and Mental Health Service Line Director for the Rush University System for Health. He is a graduate of Lewis & Clark College and The Chicago Medical School (with many clinical rotations at the VA Hospital). 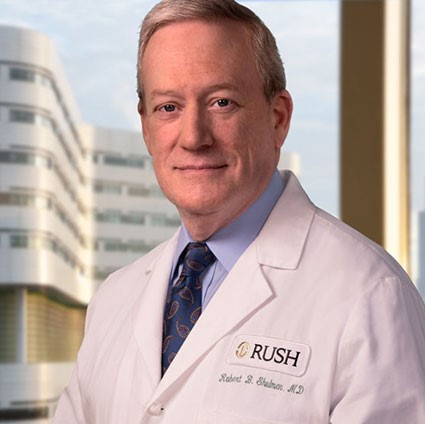