Research on the Impact of Age at Injury

Deborah Little, PhD
Related Content:
A Long Beginning to a Long Road—from Combat to Recovery
Adam Shares the Story of His Brain Injury and Recovery
The New Normal

Is a service member — or civilian — at 18 going to recover better from a TBI than he will at 32? Find out what the research says.

The question is, "Is there a difference between somebody who's 18 and has a head injury and somebody who's 25 and has a head injury?" And this is exceptionally complex not only in the civilian world but also in the military arena. And I'll answer them two different ways. In the civilian--in both areas, we don't know. We don't know if it's different, if it's better for you to be injured at 18 versus better for you to be injured at 25. The research hasn't been conducted. Generally speaking, our pediatric investigations have focused on somewhere between birth and 16 years of age. And, generally speaking, in most trauma centers in the U.S. if you're 16, you're treated as though you're an adult. So if you even get into the subtle differences between 18 and 25, we haven't gone there. Most of our studies have looked at adults-- 18 and over--and those who are under 16. Very few that actually look at the effects overall. So we just don't know. We hypothesize based on data that we have that the earlier the injury, the worse off you are, even at 18, which may have something to do with where you are in your educational process. So you can imagine that if you have your injury at 18 and you've just entered college that you might have a harder time getting through college, if you get through college at all, versus if you're 22 and you already have your college degree. You're still likely to end up with a better job than somebody who is not able to complete college. So we think that there are both neurophysiologic changes that happen and interfere with that because the brain is still developing as well as behavioral and educational attainment problems that we're seeing. In the military, we have the additional problem that, generally speaking, you have high periods of stress. We do not know how high periods affect the developing brain. So you have to ask the question of "What's the effect of not just PTSD but just extended periods of being under massive stress?" We do not know how that affects the brain. In animals, it's a very negative effect, and so you could have a comorbid or additive effect when you then add an injury on top of this, or it may be completely separate. We just don't know. Again, we could expect that if you're 18 it's probably going to be harder when you try and reintegrate into the community and get jobs. If you're career military, you could have a harder time getting promotion. You could have a harder time even when you're back here getting a job. There are a lot of police forces in the country that will not take on people with a diagnosis of brain injury, which is our number 1 employer of our military or ex-military.
Posted on BrainLine May 18, 2010. 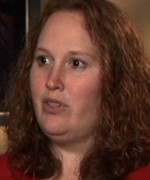