David Wright, MD, FACEP
Related Content:
How and When Progesterone Is Administered After a Brain Injury
The Pleiotropic Nature of Progesterone When Used to Treat TBI

When the brain is injured, the body's reparative system calls in the "clean-up cells." Unfortunately, they clean indiscriminately, which can cause more damage.

The reparative system in the human body, that was developed over the millennia, essentially involves calling in cells to clean up. Those cells when they come in to clean up, they cause swelling, it's just part of the process. You can think of it like Environmental Services. They're coming in, they're pouring chemicals on the floor, they're cleaning all the mess that was made by the original injury. That works fine when it's in your muscle, when it's outside the brain, but, unfortunately, the brain, when you start doing that indiscriminate cleaning, you're killing functional cells. You're causing swelling in something that's in an enclosed space that doesn't have room to swell, and all of these things lead to more damage as opposed to improving things, and that's somewhat unfortunate. I think part of the reason why our brain was put in a very hard shell, was to protect it, so it never was injured in the first place, but when it is injured, it, unfortunately, repairs or cleans up the same way the rest of the body does which is devastating. You have to think, sort of like injuring your muscle in your arm, when you get a bruise, you get swelling, you get inflammation, and that's okay, because it eventually goes down, and there's room to swell, and the other thing about it is that the muscle fibers that are in your arm, there are millions of them that all do the same thing. They're all in there to move 1 joint, or whatever. So, if you lose a few or 10,000, it's really not a big deal, because you've got millions, but in the brain, the brain is a circuit board, so you take a coin and you scratch it across a circuit board, and that little tiny scratch, you've ruined the computer, it doesn't work anymore. The same thing happens in our brain. These reparative mechanisms that are okay in the rest of the body, are devastating in the brain. So when they get set off, you need to stop it, because it's not a good thing, it's a bad thing, for the most part. One of the things that progesterone does, is it prevents these environmental services cells from migrating to the area and from even being called to the area to start that cleanup process. One of the other things it does, is this excitotoxic cascade that I referred to, classically described as glutamate release and calcium influx into the cells and those types of things, progesterone indirectly blocks a lot of that process and blocks a lot of those receptors, and then there's 1 other mechanism for ongoing cell damage, something called apoptosis, and that's where the cells, they're injured, and they go on to decide to commit 'suicide,' literally. Just part of the cleaning process and progesterone slows that or prevents the apoptosis that's going on. So that's just 3 of the ways that progesterone is effective in the traumatic brain injury process.
Posted on BrainLine October 25, 2012. Reviewed July 25, 2018.

David Wright, MD is a tenured associate professor in the Department of Emergency Medicine, Emory University, and the director of the division of Emergency Neurosciences. 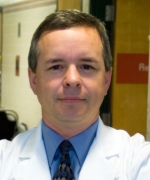