Dr. Anand Veeravagu talks about how Obama's BRAIN initiative will further advancements in research for TBI, stroke, Alzheimer's and other neurological conditions to the arena of clinical care.

[Dr. Anand Verravagu] The President's initiative, the BRAIN initiative, Brain Research through Advancing Innovative Neurotechnologies, is, in my opinion, really one of the strongest awareness campaigns we've had about neuroscience and the possibilities of treatment. When I see patients who suffer from very complicated brain tumors or advanced Alzheimer's, Parkinson's, or even a severe stroke, I always think about what it is we'll be able to treat these patients with in just five or ten years. Neuroscience is evolving at such a rapid pace. Being able to unlock some of these mysteries will really affect all the disease processes. If we make advancements in traumatic brain injury, I assure you that we'll be able to glean some of those advancements and apply them to stroke, apply them to Alzheimer's, so when I see something like the BRAIN initiative and the work that the NIH and DARPA has really put behind something like this, I'm really inspired to think that hopefully the American public is now thinking about neuroscience as sort of the next frontier, and will dedicate resources, time, effort, and hopefully young students will be interested in learning more about the brain. It's incremental. Every step that we take forward results in some sort of clinical care decision. Whether we're talking about antibodies that are being developed on a monthly basis, new radiation systems, or even new surgical techniques, all of these advancements really have been focused on translation into the clinical sector, and I think there might be a time when we have one really, really big break. I'm not sure what that's going to be, but that will be something that everybody will be able to get behind, and hopefully it will help a lot of different types of patients. But in the meantime, we're making incremental progress, and slow and steady will win the race. But it doesn't hurt to have a few big achievements along the way.
Posted on BrainLine September 4, 2013.

Anand Veeravagu, MD is a neurosurgeon in training at Stanford University School of Medicine. He is a former White House fellow and special assistant to Secretary of Defense Chuck Hagel. He previously served as chief neurosurgery resident at the Palo Alto Veterans Affairs Hospital. 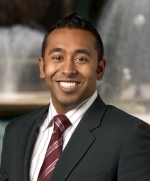