One Way to Spell Hope: RESEARCH

Dr. Paul Aravich talks about the relationship between TBI, PTSD, and Alzheimer's and what is needed for the diagnoses and treatments of these conditions.

When it comes to Alzheimer's disease, many people fear Alzheimer's [Paul Aravich, PhD; Professor Eastern Virginia Medical School] more than death itself. Kevorkian's first assisted-suicide person was a person diagnosed in the early stages of Alzheimer's. She'd rather be dead than have Alzheimer's. We fear it terribly. So when people ask about Alzheimer's disease in the context of traumatic brain injury, it's a very interesting question to ask; but, oftentimes it's asked in a vacuum. Because at the conferences that I go to and in the worlds that I travel, we have really separate, independent silos. Where we have Alzheimer's advocates and investigators on one side in one echo chamber, and we have traumatic brain injury investigators and advocates in a separate, independent echo chamber. Yet as is pointed out, a lot of people with traumatic brain injuries want to know if they're at greater risk for Alzheimer's. I was asked, for example, by a national media organization what did I think was the best outcome of this past summer's world congress on Alzheimer's disease. And to me, I thought the biggest and most impressive outcome was finally at the same conference, at the same time, we had not only Alzheimer's experts but also traumatic brain injury experts and people that were experts in post traumatic stress disorder. To me, that was fabulous because these are parallel, independent universes that otherwise at an investigator level were relatively--and at an advocacy level, oftentimes don't intersect at all. So when asked about risk of Alzheimer's disease, I think what's important to understand is we don't know what causes Alzheimer's disease, nor do we know how to effectively treat it. In that sense, we know more about HIV/AIDS than Alzheimer's disease. We know what causes HIV/AIDS, and we know how to significantly slow its progression. We don't know either of those issues definitively in Alzheimer's and the other irreversible dementias. And so one of the ways you spell hope is research. We need more research to spell hope. And so we need more public advocacy for these issues.
Posted on BrainLine February 14, 2013. 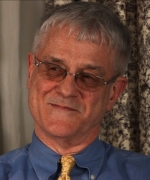