Jason Belser Explains Why He Retired from the NFL

Jason Belser
Related Content:
Could CTE Be Diagnosed in People Before Death?
CTE pathology in a neurodegenerative disorders brain bank
NFL and Military Concussions: Need Culture Change
What Happens When You Have a Concussion?

After "11 wonderful seasons" Jason Belser retired from the NFL. "I had four concussions, but I still have all my memories. Clear as day."

[Jason Belser] On special teams, when the team kicks off, you have ten guys running down the field. If you add in the kicker you have, you know, that's your 11th man. And ultimately, you're trying to stop the offensive team, who's catching the ball, from advancing the ball past the 20 yard line. They're defended by what is called a wedge. That's the back three or four guys. And they'll come together, and they'll group themselves as tight as they can to seal a path off so the ball carrier can break through. I was coming down from the left side, which was the second spot, so I had contain. Contain means I have to keep my right—at that point in time, my right side arm on the ball carrier, left side arm open, contain free. Big guy, two guys came at the same time. I had to split those guys, so that's what your job is as the wedge buster. To split the wedge when it comes down. You don't have a chance to second guess. "Do I do this or I don't?" No, you have to do it. Because if you don't, the integrity of the defense, the lanes is going to break down. I made the decision like I always do. Was hit right here on the side and completely went out. Didn't come back in that game. It was against San Francisco. Finished the season out, played well, had an injury to my right shoulder, so I was trying to rehab that during the off season. Never did get back to 100% healthy, and I decided you know what, I've had enough. Played 11 wonderful seasons, got to spend two seasons back in Kansas City, my hometown. I've had enough, and then also being that I had a concussion that year, I really started to think about, you know what, I've really been safe from concussions my entire pro career. You know, I don't want at the end of the road to have to leave the game that way. So I made the conscious decision. I'm done, I'm done. I wasn't a starter anymore. It was kind of—it was almost interesting how I came in the league. I came in the league as a special teams player. Did play some defense my rookie season, then ultimately leaving the game the same position, and I was fine with that. I got to take all the memories with me, and I still have each and every one of them, so even with four concussions, I still have all those memories and see them as clear as day.
Posted on BrainLine September 15, 2010.

Produced by Noel Gunther and Brian King for BrainLine.org. 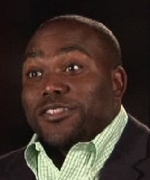