How Do You Explain the Anatomy and Physiology of a TBI?

How do you explain the anatomy and physiology of a TBI?

[Dr. Heechin Chae] The anatomy and physiology of TBI, well, the brain is a very complex organ. I call it a very complicated network made up of brain cells connected by axons, which basically is like thin wire that brain cells use to communicate with each other. A concussion—I use this metaphor a lot with my patients. The brain is like a city with tall buildings and roads and bridges that connect buildings, that buildings send cars to communicate with each other. And a concussion is like an earthquake, and so an earthquake is not strong enough to knock the buildings down but enough to cause damage to the roads and bridges. And so the anatomy of the brain after concussion is just like that. When you look through CT scan, MRI, the brain actually looks normal, because the scan actually focuses on the brain cells, the buildings, but it doesn't have a good ability to assess the axons, which are the bridges and roads of the city. That's why a lot of times people with concussion, they get a CT scan in the emergency room, and they actually read normal. They have this wrong perception that everything is okay. They're even told that you're okay, because your CT scan is normal. Then they go home, and they have a bunch of problems and symptoms that last for a few days, weeks, and months, so that's the anatomy and physiology of the concussion or TBI.
Posted on BrainLine September 10, 2013. 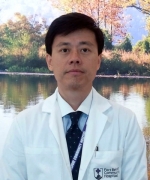