Ginny Ruffner: a not so still life

Ginny Ruffner
Related Content:
Releasing a CD of Original Client Music to the Public as an Aspect of Brain Injury Treatment
Integrating the Arts with Technology: Inspiring Creativity
How Music Helps to Heal the Injured Brain

Watch this clip about world-renowned artist Ginny Ruffner, who refuses to let a debilitating brain injury slow down her drive to create art.

[♪ Music ♪] [A Not So Still Life] Ginny has carved out a niche of her own, totally creative and unique. But she doesn't stand still. [♪ Music ♪] She's gone on in the last decade to make a lot of large-scale sculptures and hanging pieces and chandeliers. I know she's doing a huge commission downtown. I know she's collaborating with--is it Young? Graham Nash. She's not afraid to do new things that she has to go out on a limb for. But her real interest is being an artist. [♪ Music ♪] People see me walking with a cane or hear the way I talk and they assume that I'm so-- a little bit touched, as they say in the south. I'm probably smarter than the camera for sure. My brain is fine. I talk funny. I walk slow, but so what? I'm still here and still creating. That's enough pontificating for now. I'll be back anyway. I'll be back. Think about someone who has a media presence, who actually is doing film interviews and magazine interviews. And their art is everywhere, and they've found success. Then as if a giant trap came down, you have this moment, and everything changes. You know, they told us that that wreck--that that was over. Yeah, they kind of indicated to pull the plug, and so that was tough. We found out Christmas Day and flew home the next day. And then I think the day after that or 2 days after that my wife and I flew out to Seattle to kind of put Ginny's things in order. An awful weekend I'll never forget. [♪ Wind chimes ♪] The doctors said, "There's no brain activity." "You should go ahead and take her off the respirator" and everything. And no, we don't want to do that. She was coming around, even though she wasn't saying anything, and I saw Charlie Nell at the hospital or at a hotel. I don't know which, but he had come to Charlotte to see Ginny Carol. The first time I swam up from unconsciousness I opened up eyes and there was my ex-husband and my--first ex-husband and my current boyfriend at the end of my bed and I thought, "Oh, there is a hell." And I just shut my eyes and went back to sleep. I had a paraplegia accident, but we would always say if I'd been a quad, I wouldn't have been able to make it. But I'm a para, so I'm okay. And then the quads would say "I'm a quad, but if I had a brain injury, I just couldn't do that." "I'd have to check out." And also, as far as we were concerned, Ginny probably had one of the toughest accidents that you can have, and when she woke up after a month and a half, 2 months, I think she kind of knew that it was a tough road ahead. You know, I was terrified because my mind was like a big, empty house that you know you used to live in that's familiar, but it's empty now, totally different. I didn't know what I could remember, what I couldn't remember. I didn't know what I could do, what I couldn't do. By that point, I couldn't even make a sound. I could give you an "Ah." Nothing. I could only move my thumb. The first sound I could make was clicking my fingers. Let's see, "Black Hamburg Grapes on Gold," Ginny Ruffner. 1991, so this is just pre-accident. Then when she was trying to remember and pull her artistic career back, she painted this little painting, which I thought here's where you were with exhibitions at the Smithsonian's National Gallery to here back in the studio trying to pull your conceptual development back, not to mention just the sheer necessity of control of a brush to get this, let alone that. And then look now in her studio where she is again. Yeah, that is a big old journey. [♪ Music ♪] So many things take courage to be creative, courage to be optimistic, get necessity, but I thought it makes more sense to expect the best, to expect good things. We've been very close for 5 years, and she still improves. Everything she does she improves. She plays at her Wii Fit thing. She goes to the gym. She gets physical therapy exercise. She's just religious about doing it, and she just continues to work on herself. [Ginny R.] I'm now an inch taller than I was last year. I'm working on standing up straight with my physical therapist. Isn't that amazing? Nobody ever gets an inch taller at my age. Do you know what you want? I mean, not right now. Not like dinner or clothes or something. What do you want to do with your life? [♪ Music ♪] [For more information please visit www.anotsostilllife-tbi.com]
Posted on BrainLine December 2, 2011.

Excerpted with permission from "a not so still life," produced by Shadow Catcher Entertainment. For more information on the documentary and the artist, go to www.ginnyruffnerthemovie.com.

And here, top physicians, caregivers, and  other people with TBI tell their stories and reactions to this award-winning documentary.

Ginny Ruffner, an internationally acclaimed artist, was featured in a feature-length documentary called "Ginny Ruffner: a not so still life," on her refusal to let a debilitating brain injury slow down her drive to create art. 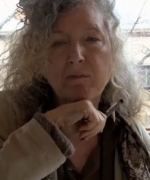