No one can definitively predict the future, but neuroscientist Dr. Ronald Hayes offers his thoughts on how developing research will help diagnosing and treating brain injury more effectively.

Traumatic brain injury will be diagnosed I think very differently 5 years from now. I hazard to make any predictions beyond 5 years, so if we can restrict ourselves to 5 years, I think that blood-based biomarkers will be used routinely, that we will use these biomarkers to minimize or reduce exposure to unnecessary radiation, because we're discovering now that a whole body CT exposes you to the same amount of radiation a Hiroshima victim experienced. And the increases in cancer rates, especially among developing kids, the pediatric population, is really starting to present an unacceptable risk for unnecessary CTs or MRIs. But we will use enhanced imaging technologies that will help to reduce radiation exposure such as magnetic resonance imaging. It's very clear right now that a significant amount of brain damage that occurs that is not detectable on CT is reliably detectable with an MRI but is never seen because we don't use MRIs. I think we'll see radical improvements in the technology for acute diagnosis of TBI and a more rational classification of TBI, because TBI is not one disease. It won't require one treatment. I think we'll make significant inroads into predicting the kinds of consequences that this poor fellow you and I talked about earlier who had what was thought to be a mild TBI and it took him months to years to recover. We will be able to give people some more accurate prediction. Okay, you have a brain injury. Based on your biomarker level and other information, unfortunately, you're going to expect to have a long period of memory deficits, and it's probably going to get into rehab. Don't be confused. Most of these people experience these deficits, and they're undiagnosed, and they don't know why they're having them. But I think the most important advances will be made in extending this technology very, very quickly to acute brain injury in general, and I'll give you some specific examples. Sports concussion is an obvious one, of course. Taking a blood test on the football field, and these tests will become a point of care test that you can go take in the locker room. Football players, like fighter pilots, are notoriously needle phobic, and you don't want to take a blood draw from me and many other more thuggish people who don't behave well in the face of needles. You want to do pinprick draws. Think of a pregnancy test or a glucose test where these things become very user-friendly and readily accessible.
Posted on BrainLine April 2, 2013.

Ronald Hayes, PhD is a co-founder and president of Banyan Biomarkers, Inc. He is director of Banyan’s Clinical Programs and Banyan Laboratories. 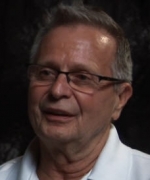